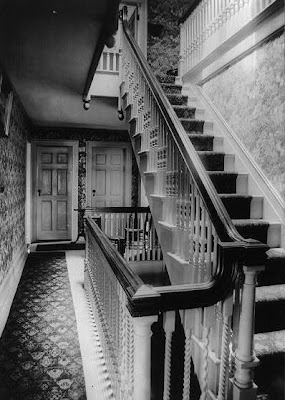 Angel actually gasped. A short little inward chuff of breath, nothing more. But I heard it. I was a pillar of salt, myself. The panes of glass in the door were really old, each with its own brand of waviness and bubbles here and there. It had more of an underwater effect than true transparency. I felt like a fisherman who feels an odd tug on his line, leans over the gunwhale to peer into a limpid pool, and sees last month's missing boater floating just below the surface instead of the expected carp.

The door swung quietly open and if anything, the effect was worse. A human waxwork had answered the door.

I don't know nothing, as they say, but I know my boss had been in contact with this house at least a dozen times between the phone and the mail to make an appointment for us to work here. But they're always the same, these flunkeys and underlings. They pretend you're just another waif wandering up the drive and expect you to explain yourself to the last jot and tittle. It is expected from them, and they expect it from you. Even the commonplace intermediaries do it, so it wasn't that much of a shock when a fellow that looked like he was purchased from a Madame Tussaud's catalog did it. His little imperious half-smile pushed my heebie-jeebies to the back burner, and my hackles came up in their place.

"We have an appointment. We're here to fix everything. We were told the staff would be prepared for us."

He made a little snuffling sound, turned on his heel and retreated back into the gloom of the kitchen. Mr. Pecksniff, I thought, and finally almost felt like smiling. I was ready for this maneuver, too. They walk away without saying anything, and you're supposed to stand comically at the door until they come back and sort of harrumph and shepherd you through the house like kindergarteners. No dice, Pecksniff. This isn't our first rodeo. I barged right in and followed him, with Angel hanging back a little.

We made it to an enormous table in the middle of the kitchen. There were four foolscap pages laid out in a perfect line, with perfect little handwritten lists on them. Each item had a dash before it, ready for Pecksniff here to make a mark when we completed it. He said nothing, stood stock still, and looked at a spot where we weren't.

Angel started looking at the list like it was a life preserver and he was dog-paddling ten miles off-shore. Pecksniff had gone dormant, or into remission, or whatever a bat does all day. I looked around.

The room was enormous. People call the place they make food a kitchen. When they get their hands on a little money, the kitchen gets the Beverly Hillbillies treatment -- same stuff, only four of everything. Different as different could be in here. The table our list sat on was a bowling alley on two dozen legs. There were stoves that looked like boilers from an ocean liner designed by Toulouse-Lautrec. Sinks like metal-lined canoes lined one wall, massive dressers lined another like a cityscape. Copper pans depended everywhere from the ceiling like stalactites. The word scullery came to mind, not kitchen. The owner of the house would never set foot in this room except to fire someone.

I started getting a weird feeling about being in there. The sun hadn't cleared the trees yet, and the place was as gloomy as a crypt. Old Pecksniff wasn't about to make a light for such as us. My mind started to wander to the poor souls that had spent their entire lives in this shadow world of drudgery right next to luxury. The sum total of their life's work was marked only by the worn edge of the tables and the uneven gloss on all the metal.

"The morning room sill shall want a dutchman."

Angel jumped and I woke up a bit. Pecksniff had been watching us without looking at us, another specialty of these underlings. When Angel's eyes had moved to the second page, Pecksniff knew it and explained the first item without being asked.

Shall want a dutchman. Perfect. The cadaver was talking in 18th century lingo to us. Any normal person would have said: needs a patch. Calling patches a dutchman was code for: don't spend any money buying anything and don't spend any time you can charge me for, either.

Poor people are extravagant compared to the silly rich.

(to be continued, if you insist)
Posted by SippicanCottage at 12:42 PM

Are you sure you aren't working in my neck of the woods? Love it!

On some late nights, when the bourbon has come and gone, and I am pecking away at my keyboard at some work of semi-fiction no one else will read, I tend to flatter myself.

It is at that point I believe I write as well as you do.

If I was any writer at all I could tell you how baseless that comparison is.

But then, you already know, Don't you?

I'm back ... third line from bottom of same paragraph ... "depended" s/b "descended." Typos make the writing more real for this reader but I insist on letting you know what I find - why waste the knowledge?

Depended is the correct word, and the one I intended. It has more than one meaning.

I know, I know! Then Peckinsniff says, If you need help with the coffin, call me..