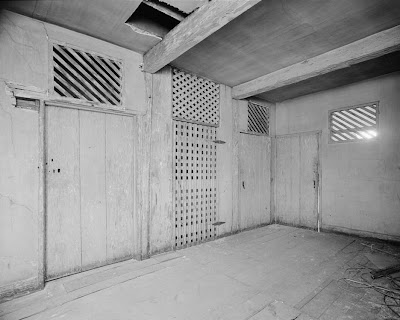 Old Pecksniff gave me one of those little chuffs that won him his nickname, spun on the ball of his foot, or his cloven hoof, or whatever he had in his shoe, and went back up the stairs. I made a quick pact with myself, promising to immediately cut my own throat with my putty knife if he switched off the light out of habit or malice when he got to the top of the stair, and so save myself from suffering at the hands of whatever pack of chimeras or gorgons or rabid minotaurs they kept down here. The light stayed on.

When I was little, my father sent me out to the woodpile, alone, at night. It was the middle of the winter, clear, cold, and moonless. Dad lied like an accountant and said the flashlight was dead. I hinted I'd rather not go. He hinted I'd better.

"Just keep looking all around and you won't be afraid."

The door clicked shut behind me, and the wan pool of light at the step didn't reach very far. I ignored the advice and tromped out through the windscoured drifts, my footfalls squeaking in the perfectly dessicated snow, to the big pile of oak and maple splits out by the edge of the trees. By the time I had gotten there, I had accumulated an enormous retinue of monsters, cutthroats, spectres, werewolves, and a herd of kelpies strung out behind me -- or so I imagined. I stood there a long time, stoopshouldered and shivering, the wind whispering odd things into my ear and watering my eyes, neither of which needed any encouragement at this point. Your mind can conjure up anything in a place like that. It took all my strength to look over my shoulder. Nothing. I learned my lesson; never save up cowardice hoping for a courage dividend later.

So screw Pecksniff. I walked around and shook all the doors and looked around. I'd tell him I was looking for a place to plug something in or get a pail of water if he came back.

Most of it was padlocked, or nailed or painted shut. I found a pail and stood on it and looked through the lattice here and there. If Sotheby's did flea markets, Luxor could fill the tents. Old creels and bamboo rods, leather suitcases left in the damp too long, paintings of crabby great-uncles, a fiberglass fish. There was one locked paddock that had a sort of oversized Dewey decimal system-looking bank of drawers against one wall, trailing off into the gloom.

On the back of one of the doors that swung freely, there was a posterboard with an odd assortment of symbols on it. It was a club coat of arms, I guess, but looked like a doodle designed by a schoolboy that ate paste when the teacher wasn't looking. Noah's Ark. A skull and bones. What looked like a pyramid fringed with candle flames. Everything in it was familiar, but didn't add up to anything much arrayed on the same page. It put me in mind of my father's membership certificate in the Ancient Order of Hibernians -- or as my friends and me who also had dads in the AOH called it: The Real IRA; Irish Republican Alcoholics. Our dads were all supposed to be mowing the lawn, but they snuck down to the hall and passed a hat to cobble together ten bucks to buy dynamite for Ireland. Nine-and-a-half bucks of which was used to buy a round to celebrate the solidarity of the thing. None of them had ever set foot in Ireland, and never would. We left all that shite behind. Mom hung dad's Hibernian membership on the back of the bathroom door, forever to be obscured by damp towels.

I had a bad habit of reading everything that was put in front of me. My first boss learned the hard way not to give me old newspapers to use as dropcloths when I painted the inside of cupboards. Obituaries, racing results so old all the horses were dead, bridge columns, didn't matter; all typefaces and topics were like waving a red rag in front of a bull to me. It's not my fault. This poster was worse. It was a puzzle.

A rooster. A beehive. A trowel and a sword together, of all things. Alexander, the Great Bricklayer?

Oh for pity's sake. The compass and the square. The all-seeing eye. Like a little boy that can't wait for the teacher to call on me, bursting with the answer, I said it out loud: "Lord of the Manor is a Freemason. Figures."

I was the kid at the woodpile again.

"He most decidedly is not."
Posted by SippicanCottage at 8:31 PM

Excellent break for commercial. I can't wait until tomorrow!