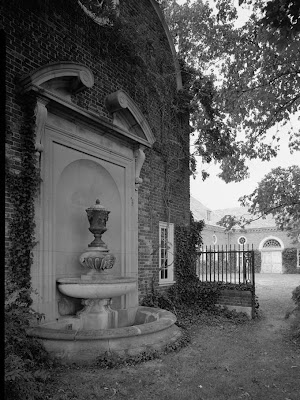 
So I'm out in the driveway again, alone, with the house glowering at me once more. I looked right back at it.

I wasn't afraid of being observed. No danger of Pecksniff pulling back a curtain and watching me. A dragon just sleeps atop his pile of gold and jewels. He doesn't worry himself overmuch over passersby. No matter what Angel thinks, any true Irishman knows his dragons. Cuchulain was pulling dragon hearts out and showing them to the brutes as they died before Cape Verde was a twinkle in a Portuguese slave-trader's eye. And after they lit out for America and the cranberry bogs, too, now that I think of it.


When Pearse summoned Cuchulain to his side,

We Irish, born into that ancient sect,

But thrown upon this filthy modern tide

And by its formless spawning fury wrecked,

Climb to our proper dark, that we may trace

The lineaments of a plummet-measured face.


Angel should know better than to make the Old Money mistake of lumping everyone outside your tribe together. They figure we all sit in the same Papist pews, and they can just file us all under: garlic eaters and save some trouble. The WOGs begin at Calais, they used to say, and pronounce it like callous to multiply the contempt intended. Doesn't matter if Dover has white cliffs or the Charles River next to it. Guys sipping gin and quinine in Peshawar said the same thing.

Irish garlic eaters. That's a good one. Dad would have gotten a kick out of that.

The house. Might as well have a real look at it since I'm out here. Around the side, the place has a fountain, too, left dry for the freezing season fast approaching. There's a date, incised deeply into the stone or concrete or whatever it is.

L VXOR
L is fifty, right? X, ten. Been a while. I just let the movie dates roll by in the credits.

No, not a number. That would be mundane. The house has a name. These people always name their houses. When they were still pestering whales and had seaside shacks, they'd put a board on the side of their house with a name on it, same as the boat had, and the habit stuck. And the V's not a V. It's an incised U. Luxor. Odd way to write it. What the hell does Egypt have to do with anything around here anyway? Well if that loon Hearst can have a Xanadu, I guess a blueblood here on the other coast can have his Thebes.

Jayzuz again. It's probably nine by now and nothing's done. I lied of course; there's no way I'll rat Angel out to young Charlie. I'll cover for him until the list is done or he comes back, and he knows it. I'll finish it all myself if I have to pull Pecksniff's heart out and show it to him.

I went around to the door again and paused for a moment, wondering if I should start a passion play all over again by knocking, thought the better of it and opened the door myself and went right on in. It's always expected that once the the factotums let us in, they were no longer at our service. We weren't being accorded respect, exactly. We were supposed to be invisible. That's different.

Just when I thought old Pecksniff couldn't get any creepier, he doubled down by reappearing at the corner of the big table in the kitchen, as if he hadn't moved an inch since Angel and I had fled to the relative safety of the driveway. By god, this guy is a daisy.

"Is there some difficulty?"

"No, nothing's wrong. Angel... my partner went to pick up some stock we might need," I lied like a Turk in a bazaar. "We'll just need a spot in the house to keep our tools and where we can work a little without worrying about hurting anything. Or a garage or something."

He did it again. Said nothing, just listened intently to me like I was a lost foreigner mis-conjugating strange verbs, and then turned on his heel and walked off without saying anything. I hesitated a moment, and then realized he was giving me a second chance to make a fool of myself by standing there waiting for an invitation. I hustled to catch up, and he led me to a dark, wainscoted anteroom, a kind of hub for him, I think, but out of earshot and view of the lords of the manor. He clicked an old-fashioned switch to make a light, and you could almost hear the lightning jump across the terminals when he closed the circuit. Nothing ever gets replaced in these places. The light revealed a staircase headed down. He descended the treads in his peculiar way, and I followed him down, picturing in my mind's eye him holding a torch over his head, entering a catacomb.

There was a door at the very bottom of the stair, a no-no in any modern house but common in these old shacks. The door was locked, but he produced a key immediately from thin air and opened it. It took every ounce of courage I had to follow him in there, and I immediately wished I hadn't.

The place smelled of worms and corruption and the grave. I knew the peculiar smell of lime underground, from all the patched parge coats of mortar on the rubble foundations to the nasty ropy calcimine whitewash everywhere. It makes you think of Tom Sawyer if you're out in the sunshine, and a pauper's grave down here. There were pens or rooms of some sort sectioned off and sort of caged in with lattice and rude doors fashioned from whatever lumber was unsuitable for anyone but the most menial help to look at. There were ancient hasps and padlocks on everything, which suggested keeping things in as much as out, which didn't improve the mood any.

"The old laundry. You may make whatever noise you like down here. No one will hear it, and it will cause no trouble."

I thought it would be considered bad manners to run screaming out of the house and into the woods, so I resisted the urge. I used to think I was smarter than Angel, but I got over that right then and there.
Posted by SippicanCottage at 1:03 PM

All I can say is you damn well better not get yourself killed down there, or we'll never know how this turns out.

I can't keep this to myself. I am posting a link to you on my blog.
Dammit you are good!

Once again checking on Gerards blog pays off handsomely.