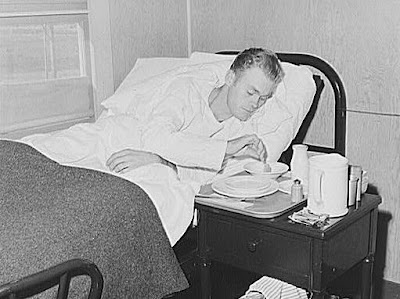 I had a bizarre interlude day before yesterday. Seemed odd, and unsettling.

I'm ill. Bronchitis, it appears; the little bugs thinking about pneumonia but too languid to bother. So I'm hacking and wheezing, and feel as though there's a concrete block on my chest, and a brick inside it.

That's serious business for me. But not for the reasons you'd think. All anyone cares about, ever, is yammering endlessly about health insurance, and I haven't got any. But that's not the problem. It almost never is. I have no idea what you're all talking about all the time. You all seem to spend every waking moment thinking and talking about paying for sitting in doctor's offices. You seem to enjoy yourselves there more than I do. You see, if I'm sick like that, I can't work, so all the health insurance in the world won't help me. We're instantly poor if I don't work. It's the nature of the beast if you're self-employed.

The word "insurance" used to have a definition. It meant you paid a small amount to safeguard against an unlikely but catastrophic event. It's illegal to purchase that in Massachusetts. Has been for a long while, or I'd already have it. Since the people who know how to bribe a state senator want all sorts of things mandated, you have to pay in advance for "healthcare," which means everything every crank wants to have paid for by other people that can loosely be called doctor-y. It's against the law for me to purchase insurance to pay if my kid gets cancer, because people want to get loaded on happy pills every day and have other people pay for it.

But as I said, I'm like a criminal in Massachusetts. It's mandatory to have "health insurance," and I don't. I just pay my family's doctor bills with my money, like I always have. The state fined me $600+ last year because I couldn't afford the bizarre set of circumstances they call health insurance. Last time I checked, it cost over $1100 a month, and I'd still pay if I went for routine care. And if one of us gets real sick, it would bankrupt us because paying a 20% copay on a six figure bill is science fiction anyway.

So I go to the walk-in clinic, and something like medicine happens -- at least what medicine resembled before you guys fixed it so it doesn't work anymore. The doctor didn't go to Harvard, but so what? I knew what was wrong with me before I went. The stripmall doctor didn't look at the wrong end of me or anything. I paid seventy bucks, didn't have to wait but ten minutes even though I didn't have an appointment, and got two prescriptions that will cure me. The doctor helpfully told me that if I went to the Stop & Shop, for some reason or other one of the prescriptions would be free. It was. Funny how with all the talk about all the help I'm going to get, I got robbed of $600 on one hand by everyone that's trying to "help" me, and a supermarket gave me something for free. Not funny haha. Funny.

When I was waiting in the lobby for the doctor to see me, the "Town Hall" meeting with President Obama was on the television. It occurred to me that I'd never listened to the guy give a speech, same as his predecessor. It was surreal for my wife and I to sit there and listen to us being discussed like we were a kind of furniture that needed rearranging. It's supposedly a time for questions, but I only have one question, and it's for the audience, not the dais demagogue -- for anyone that would watch or participate in such an event, pro or con:

He's no Clovis, and they have a cream for your scrofula now. Why would you let someone who knows precisely nothing of value about you talk to you like that?
Posted by SippicanCottage at 12:55 PM

Sipp...unfortunately you are one of a diminishing few that doesn't need leading by the hand (nose) through life.

"Why would you let someone who knows precisely nothing of value about you talk to you like that?"

Bravo sir! I think you just explained why all of the Tea Party/Townhall protesters are so angry.

I hope your doc-in-a-box visit has you feeling tip-top soon.

I hope you are feeling better, sir.

Some idiot told me the other day that all Washingto0n wants to do is give us health care just like Massachuetts. Naturally the individual had no inkling of what he was talking about -- no experience with mandated health insurance -- just like that guy on TV at the town hall.

I don't. He never speaks to me or for me.

But I have had bronchitis. Ouch.

I had to get my mitral valve repaired. I didn't have insurance. I am still here. I still have some money left, too.

As the "health care" debate has been raging on, I've been thinking about your family's experience with Massachusetts mandated insurance.

Isn't it time for another one of your instructive Pajamas media columns?

I currently pay for my own private plan because I'm self employed. I'm afraid that I too will become like a criminal if the so-called Progressives get their way.

You're always my cautionary tale when people mention MittCare. Freedom means ability to choose even the least worse consequence. Or not.

Do you think your brush with Lyme Disease is contributing to your current ailments?

It was surreal for my wife and I to sit there and listen to us being discussed like we were a kind of furniture that needed rearranging.

I sure hope he was talking about Sippican Cottage Furniture. That kind of advertising couldn't hurt.

I get the same feeling the few times I have bothered to listen to Zero.

Ruth Anne, you are solicitous. You should be a solicitor. Teehee.

You ask lawyerly questions. Since you asked; no, I've never really recovered from that, every which way, and might never.

This posting gets an A+++ from me and also a wish that you are feeling better.

So that is what RomneyCare, AKA the Massachusetts Miracle really is?

I think I'll pass on Mass.