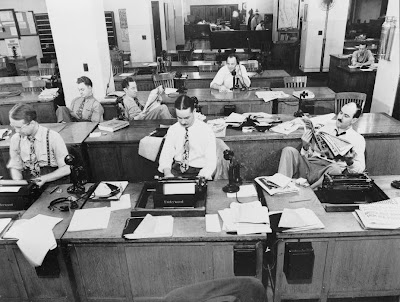 I looked at the Intertunnel over the weekend on someone else's laptop. I don't have a laptop. They asked me what I was doing; what are you looking at on that thing? I wasn't looking at anything, really. I was looking at everything and nothing, to see how it looked. What impression I might get from it.

People talk a lot about how the Intertunnel has upended the applecart of commerce in writing. True dat. But not in the way you might think.

I was amazed when I used another man's laptop, because I saw all sorts of stuff I never see. It was an Apple, so everything was exactly wrong and backwards, and so was easy to figure out. I had no idea all that advertising was on the webs. I never see it. I can't imagine how the average advertiser thinks they're getting any bang for their buck buying advertising by the impression.

We used the laptop to display video that was advertising. It's not sneaky. It was de facto advertising, we looked for it, and we watched it. I'm not sure it was efficacious either, as we never use the service being advertised, but we at least looked at it. It's a start. Apparently there's a Progressive Insurance ad on the page that displays the statistics for my blog. Apparently they charge someone to not show it to me, because I'd never seen it before.

It's all broken except it works somehow. I don't see any starlets missing any meals even though every kid with a computer knows how to steal movies. They've still got more than cornflakes and peanut butter in the company lunchroom at the New York Times, I imagine.

One of the mistakes being made by everyone is thinking that there is any kind of line between news and entertainment. I don't read any newspapers because I can't find out anything useful from them, and they are deuced poor entertainment. They remind me of watching a Health Class short film warning you about Polio. The topic is irrelevant and so the information is useless and so all that's left is the entertainment value in it. If you're a hipster doofus you can make a website devoted to how wry watching pointless stuff is, but that's about the sum of the entertainment you can get out of it.

It's not fun to collect and distribute real information. It's hard work, but you can charge for it. Dun and Bradstreet collects all sorts of real, hard information about companies. If you read their gathered information about those companies, you could make real, hard decisions about how you might interact with those companies, as a investor or a consumer or a competitor. And if you want D & B to tell you what they know, they'd like $139, right now, up front, no fooling.

Amuse yourself on the Internet. There's nothing else to do here but howl gigantic curses into the ether, or post pictures of your cat. If you think your content is worth money, charge for it and reap the tumbleweeds or the treasure. But for god sakes, stop whining.
Posted by SippicanCottage at 8:08 AM

ed in texas
That concept, that the information itself might be valuable, is what a guy named Bloomberg (current mayor of NY) made into a pile of coin.

"No whining." I think that was the first thing that my Drill Sergeant said.

Blogging is a hobby, not a profession for 99.9% of the participants. Frankly, if most actually wrote as well as they think they do, they'd already be published or running paid op columns in some print venue.

I skip past blogs with reams of advertising. As soon as the blinking, talking, moving stuff kicks in, I'm out of there. Same with an entire column of sidelight ads or the dreaded ad between posts. Generally the writing isn't worth the annoyance.

I don't know what these people are thinking, but it's obviously not reality based.

Wag is an excellent one word summation of Gerard, I'd layer that with a thick spread of smoking hot manliness. The man is a Dude of the first order.

Cat pictures? Come on over to my place.

I am amazed that you can find time for writing while creating original furniture. However you do it, keep it up as you are one of my favorite reads.

I dimly remember working in an office like the one pictured. Life moved at a more leisurely pace then.