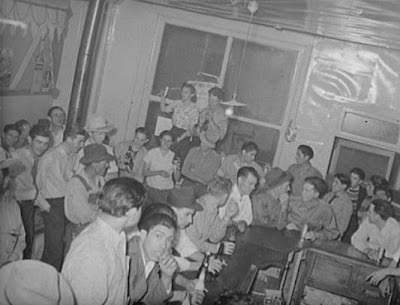 (Editor's Note: First offered in 2006)
(Author's Note: I was in the roadhouses because I worked there. I bet the editor was just another drunk in there. And there is no editor)

I've been in a thousand roadhouses. Paint peeling from tin ceilings, yellow pine floors stained with the offal of a million benders and scoured clean by the grit of numberless shoes. The neon winks at you. The Men's room door is on its fifty-fourth set of hinges, the room itself is on its third cleaning in forty years. There are bowling trophies and fish heads and incongruous signs on the walls all donated by the denizens -- some of whom are half forgotten but in attendance, others always present but dead. The glasses aren't clean but beer comes in its own glass, and you can order it by holding up your fingers. The pool table lists to port a bit; after 11:00 PM the patrons do too, so all is well. The quarters, stacked like a tower in Pisa, signal "next game" 'til tomorrow and tomorrow and then some anyway.

There's a stage, capacious enough for an anorexic to tell jokes from, with four people, their instruments and equipment, and a full drum kit on it. The singer wanders the floor anyway. He sings into a bus station microphone, whispering in it like a lover, or alternately screaming into it like a Stanley Kowalski sort of lover, and peppers his delivery with winks at pretty girls and harmonica playing like a distant elegaic train whistle on the prairie at night.

The guitar is a Fender Stratocaster, of course; it's strung with strings like cable, and you never hear a note unless it's intended. You can't mash them all around. The amplifier is right behind him, that player, and if he swings his hips -- he does-- the sound shakes the strings into a sort of harmonic frenzy, and he rides the rising howl like a surfer does a wave, and then swings the neck away and the volcanic tone returns to the slow boil.

There's a lot of space in the music. The bass is an anchor. The drummer could make do with just a high hat and snare. His right foot is like a piston driving a pile. He moves his stick to the ride cymbal, and you sense that the bell of the cymbal is a world away from the edge.

The guitarist knows what he is doing, and never plays what is being sung; he winds his counterpoint around the vocal like a vine on a drainpipe, and the beautiful rainwater courses down inside, splashes down in the garden, the curb, the gutter -- into the very earth. It rises again from that earth, and forms melancholy clouds, scudding across the musical horizon, then brings the cool, gentle rain down on all of our heads, which cleanses and anoints us.


Your girlfriend goes home with the bass player, of course.
Posted by SippicanCottage at 9:51 AM

Email ThisBlogThis!Share to TwitterShare to FacebookShare to Pinterest
Labels: Bits of my life pulled out and flung on the Internet floor, dancing, music

Any girl who goes home with the bass player isn't worth having!...I'll duck now

Back in the 70s, I was a petroleum transfer engineer at the local Exxon. Used to listen to Mr. Withers a bunch and thought he and his band probably helped define ‘cool’. I have proof. See below.