What Al Capone Understood That You Don't 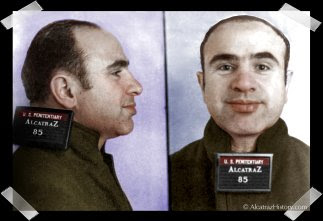 Gangster movies and the general media have a tendency to portray criminals as more interesting and sophisticated than they really are. They portray politicians, who are sometimes the same thing, in the same way. But few politicians are really all that shrewd. They're just shameless. That's different.

Hollywood likes to show gangsters being Machiavellian, but they're usually just willing to use force to get what they want, and are willing to take chances. Fearless and arrogant will get you a long way in a world full of the meek. Gangsters are in a state of nature, red in tooth and claw, while John Q. Public thinks meat comes in little packages from a deli. 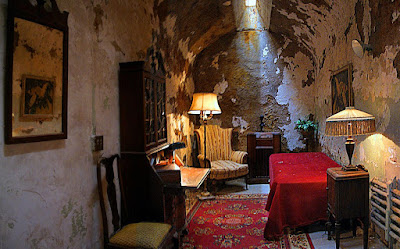 Al Capone was not a sophisticated man. He was a Camorra gangster, a Naples thing, which is not the same thing as the Mafia, which is a (the) Sicilian thing. Camorra gangsters don't have a lot of redeeming family values to add spice to your Pacino movie. Just violent and grabby.

That picture is Capone's cell in the Eastern State Penitentiary in Philadelphia. He spent eight months there for carrying a concealed weapon.

It would appear that the cell testifies that prison authorities could be easily bribed. Not exactly. I imagine that it was fear of Capone that got him his goodies, and the warders accepted his money as gravy. If they weren't afraid of him, they would have just taken his money, or not taken his money, but he wouldn't have got his goodies either way.

Al Capone was literally a barbarian. And yet he could assemble truly salubrious surroundings for himself in any circumstances. Tradition based in wholesomeness trumps intellect searching for thrills, every time, for comfort.

A Queen Anne wing chair is very comfortable to sit in. It affords motility -the ability to slightly shift your position without thinking to avoid discomfort. The wings and sides shield the occupant from drafts. The open shape of the arms invites the sitter visually. The patterned fabric has a certain light friction that keeps the occupant from slipping forward.

The floor lamp gives a pool of light. The shade is angled downward, because the purpose of the lamp is not general illumination. It is to make a well-lighted spot at a sitting area without producing any harsh glare. The other, table lamp does so even more, and softens the downward directed light with a tasseled fringe to avoid severity.

The carpet on a hard floor is a no-brainer. Living on hard floors so your Swiffer or Roomba is comfortable instead of you is not smart. And nailing the carpet down is like wearing the same underwear too long.

The Chippendale drop-front desk is elegant and useful. Books are precious, or should be, and you can keep them best where they can be seen, but are not open to dust. You can write and then close up the clutter writing brings.

There is a chair and a mirror at the entrance/exit. You need to look at yourself before you leave your abode, and you often need to put things down, including yourself, for a moment when you enter. Capone understood that even though his door was a modern porticullis.

There is a piece of art hung to contemplate while seated or standing. The radio for entertainment is not treated as solely an appliance; it needed to be as elegant as furniture, because when you put it in a room, it is furniture. And Al wanted to listen to opera in the evenings, because he knew it's crazy to wallow in misery voluntarily, even for your entertainment. There is something green next to it, to amuse the occupant with its tending, and to suggest the outdoors indoors.

As I said, Al Capone was a barbarian. I'd rather live in his prison cell than your house.
Posted by SippicanCottage at 8:52 AM

Sipp...I'm viewing this next week,It's the opposite of what I was looking for but the amount of work to be done is starting to attract me...fancy a working holiday?http://www.struttandparker.com/property-for-sale/wirral-merseyside/property_CHS090041.html

Thud- You are apparently richer than me.

What's got you down these days?

Sipp....I work for my wife's business,best for all involved given my abilities or lack of...maybe I should ask for a payrise?

Love this post. Have I mentioned this week that you're a beautiful writer?! Good lord. Awesome.

The rug really ties the room together.

Thud- Your work is excellent. Ask for a raise!

Eric- The world is a comedy to those that think, and a tragedy to those who feel. In addition, I occasionally hit my thumb with a hammer.

Pat- You're very kind, and I appreciate it. Thanks for reading and commenting.

Buggy- Teehee. Obviously you're not a golfer.