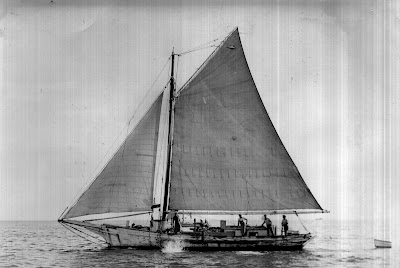 A man becomes a sea monkey without knowing. The boom goes port to starboard and back again and you learn to toss your head easy as you please, like a woman in a breeze. There's no deciding in it any more.

The tell-tales whisper to me. The others think I'm daft to say I can hear them. But I've got the tiller and the bank account and there's precious little tittering. They have last night's booze roaring in their ears and don't listen anyway. The ocean is their whorehouse. It's my chapel. I hear the very beads slip through the calloused fingers as the Pater Nosters are murmured.

The tell-tales pat the sails like my father used to pat the flank of his horse. I never understood his love for that brute. Father would send me out to hitch it to the cart and snicker each time knowing if I took my eyes off that bag of leather and bones for a moment I'd get bit. He'd come by and pat-pat and I swear that beast would have rolled over and let the old man scratch his belly. They were both hitched to a sort of cart, so maybe they commiserated somehow. There is love in this world that knows no understanding.

Father would say one thing and mean another. He was downright oriental in this fashion. You had to fathom what he was driving at all the time. He said that if you went on the ocean in a boat you did not love, the ocean would know it, and you would be consumed. He said that all things in this life are that way.

It occurs to me now that father hated that horse the whole time.

Sometimes I think I'm feeling my way along the bottom. The others are pukers sometimes, but I think I can feel my mind's fingers trail along the rock snot on the bottom all the time and the rollers don't bother me. They're all afraid of that bottom, oh yes. But it's where we must go for the oysters. And it's where we must go when the tell-tales don't whisper soon enough.
Posted by SippicanCottage at 6:36 AM

I somehow knew you were no stranger to a tiller.

Are you saying 'A tiller's his Hon'?

what is it about bad puns that some of us can't resist?