Silence Dogood Would Understand (From 2006) 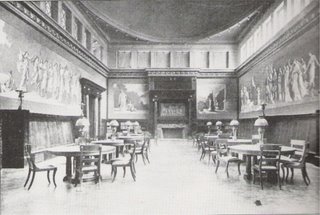 A council of officials of uncertain importance decided that since Emperor Iyasus of Ethiopia had retired to a monastery, they could appoint Tekle Haymanot I to be the Emperor.

Over in Ramillies, the War of the Spanish succession had English, Dutch, and German troops defeating the French. They'd mix themselves up and fight one another in one form or fashion for 250 years or so.

George Farquar had gotten over stabbing another actor during a swordfight, and was wowing them on Drury Lane with his play: The Recruiting Officer.

John Machin the mathemetician was getting a little notoriety for computing pi to 100 decimal places.

And in Boston, Massachusetts, Josiah Franklin wiped the tallow renderings from his soap and candle manufactory off his hands, and held his newborn son - his tenth: Benjamin.

He'd have seven more children, too. But it's Ben Franklin we all remember, because he's the most American man that ever lived.

Franklin did every darn thing, and did it well. He wasn't educated formally much -- his father only had enough money for one year at Boston Latin --but Ben became an autodidact, and read voraciously. When Benjamin was fifteen, his older brother James started the first newspaper in Boston, the Courant. Ben was forced to do menial work only; setting type, sweeping up, and selling the papers in the street, which bugged him. So he invented a female nom de plume, "Silence Dogood," and started writing editorial letters about matters divers and sundry in the colony, and especially how poorly a woman like her was treated.

Ben would slip the screeds under the door of the shop at night, and his brother would print them in the paper. They were a big hit, and everyone wanted to know: Who was Silence Dogood? Ben knew he had catapulted his brother's paper to prominence, and figured he'd admit his ruse to his brother and claim his place as a writer for the paper.

His brother hit him.

Back to the compositor's bench. Eventually James got thrown in jail for annoying the local clergy about smallpox vaccinations, of all things, and Ben got to run the paper until they let his brother out of jail.

He did a great job, and asked his brother if now he could write for the paper.

His brother hit him.

This grew tiresome. So he ran away to Philadelphia, on foot, though it was illegal to do so at the time -- it made him a vagrant. Eventually he found a job working at the local printer. But that first day, he spent his last money on a few stale rolls, and sat eating them --wet, disheveled, footsore, broke, in a strange city -- and still managed to attract the attention of the woman he'd marry seven years later: Deborah Read. And all that was before his eighteenth birthday.

Benjamin's 300th birthday anniversary is this year, and the rest of his life is being endlessly dissected and pawed over for the glory and good sense in it, and like a very few men, his life can take almost endless scrutiny without running out of things to look at. I'll leave the rest to others.
But I had an adventure with Ben, and I'd like to share it.

I grew up in the first town in America named for Ben Franklin. It was part of Wrentham, which originally was part of Dedham, Massachusetts, but in 1738, when they got themselves a Congregational parish, they decided to break away, and call the new town Exeter. Later, someone got the bright idea that if they massaged the ego of the most famous -- and one of the richest -- men in America, Ben Franklin, by offering to name the town after him, maybe they could flatter enough money out of the old patriot for a bell for their church steeple.

"Sense is preferable to sound," Franklin wrote back, and sent them a crate of books instead. And so the first public library in the country was born.

The town had other benefactors over the years, and in 1904, the daughters of the most prominent family in Franklin, the Rays, dedicated a magnificent Neoclassical library to honor their parents.

I spent more hours in that library than all the Italian stonemasons the Rays imported to build it ever did, combined. I haunted it. It looked almost exactly like the picture you see above when I was a child. How could you not know that books and words and scholarship were a noble and important thing when you sat in that magnificent reading room under the watchful eyes of the semi-nudes in the mural? The semi-nudes were once just plain nudes, and Tommaso Juglaris had to return to paint additional clothes on them. Franklin's always been like that.

A book was an expensive and rare thing for my family then. I could list every book in my house in 1964 right now; it wouldn't take long. I read eveything in the children's library by the time I was seven. I wanted to go upstairs, where the adult books were, when adult books meant something else than they do now.

They told me I was too young and I'd tear the pages from the books or put lollipops in the card files or roller skate in there or something; my mother had to go and explain to them that I needed to see more than the four newspapers my father would bring home every night. They relented.

The library had massive bronze doors with big rings you had to turn to enter, and at first I was too small and had to wait for someone to enter or exit, and I'd dart in. It was a temple, and I was a votary. And there, in the reading room, were Ben Franklin's Books. 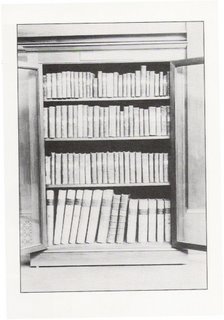 They were just stuck in a glass-doored cabinet in the reading room. I had read every damn thing in that library, including all the encyclopedias. I had walked past Franklin's books hundreds of times, and watched others go past them without giving them a glance thousands of times.

Like the Spanish Prisoner story, one day I just tried opening it. It was unlocked. It was a wonder no one, including me, had ever thought of that before. I get the feeling Ben Franklin was cleaning out his back room when he donated the books. No matter. I don't remember exactly what any of them were. They've blended together with all the others I scoured for the next thing I wanted to know, and the next, and the one after that. And I put them back without anyone ever knowing. But I knew.

The library's still there, because stone don't burn; most every other stately Victorian era house the Rays built in town have been burned down by the dissipated Dean College students who eventually used them as dormitories. I wandered through the library a few years ago. They've ruined it of course; it's full of lousy books and rental movies I'd cross the street to avoid seeing, crummy furniture and computers no one needs in a library much. And Franklin's books aren't out where you can see them any more.

What gets into your mind? Where does the inspiration come from? What gave me the idea I wanted to look at those books like the damned want icewater? Beats me. Why do you walk to Philadelphia and buy rolls? I can tell you it was fun to hold them in my hands, all those years ago, and think about the man that sent them, through the ages, for me.

Posted by SippicanCottage at 8:21 AM

Email ThisBlogThis!Share to TwitterShare to FacebookShare to Pinterest
Labels: Bits of my life pulled out and flung on the Internet floor, history

As a child visiting my mother's native Philadelphia, she would drag us to educational places. I remember the Franklin Institute and the room where the Declaration of Independence was signed. We hushed in that room just as if we had walked into another Sanctuary.

Our country was gifted by great, wise men with diverse talents and sufficient courage to birth this nation. Oh for a Franklin, or an Adams or a Washington or a Jefferson today!

Wow. I wish I had had a library like that. I vaguely recall the Public Library in Kingston from my early childhood, an ivy-covered limestone building. Every other library I've used was resolutely modern. Except for the high school library, which was just a rectangular room completely lined with books. At least the furniture was solid wood.

Ruth Anne, it's my husband who hauls me to places like that, LOL. The perils of having a historian husband. His students are still bemused by the fact that he, a Canadian, is teaching them, Americans, American history and that he knows so much more about it than they do. LOL.

Yes, Silence would understand. So do we. What a gorgeous story. Thank you so much. I missed this one the first time around.

My first library was plain, but similarly sacred. There was a rite: to receive my library card, I had to learn to write my name. A great day it was when I achieved this feat and this honor.

Now I live in a lovely little New England town with an old-fashioned brick library. Renovated, but respectfully so. I relish it.

And we have this big, interactive library now. Every once in a while it feels like sacred space as well, as it did for me this evening, listening to you and Silence Dogwood tell this lovely story.

My own home town had a very humble little library, all wood polish, old leather and dust.As a child I felt an intruder in an adult world and loved it dearly.

I had the opportunity to visit Boston last fall, a nice enough city.

I spent a couple of days following your freedom trail, bought the usual tourist guides and feasted on the National Parks friendly staff knowledge and free literature, it piqued my interest a little more about the origins of your country so I decided to visit Boston library a magnificent old building on Copley Square with a monstrous 1960's carbuncle added to it around the corner. It was a big mistake your description - "They've ruined it of course; it's full of lousy books and rental movies" applies, together with ripped and stained carpets and an apparent inability to relamp burned out fluorescent lamps. Why do they do that? Has individually directed knowledge acquisition no value in this age?

More to the point, thank you for your essay on how working class kids amused and educated themselves in the (I assume 1960's) I can relate to it though I lived an ocean away in suburban England.

What a provoking man you are. And you make me cry.