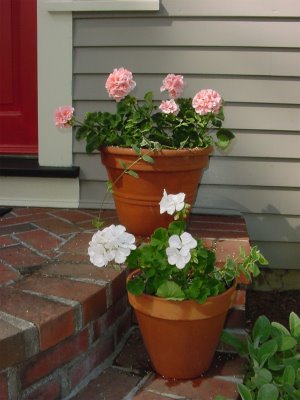 [Editor's Note: This is a re-run from a year ago]
{Author's Note: There is no editor}
We're simple gardeners here at the Sippican Cottage. While we share your admiration for those whose gardens are overburdened with exotic cultivars, and on whose lips Latinate names trill, we just don't want to pay too much attention to what we're doing.

There's more to it than that for me, perhaps. To be an expert, you have to know so much about something that you can't even look at it for the pure joy that's in it anymore. If you've ever been in the office of a really accomplished specialist doctor, you can always spot them looking at you -- eventually, if not right from your greeting -- as the bundle of bones and guts you are. As they say in the mafia movies, it's not personal, it's strictly business.

I worry about doctors that take too much of an interest in me personally anyway. I'd be in a tavern if I wanted commiserating companionship, after all. And the medicine in the tavern is more efficacious, generally. The best and most competent doctor I ever met told me the worst news in the most businesslike manner, and left the room to leave me alone with my wife. He tended to his business, and left us to tend to ours. We need more of that, and not just in the medical profession.

I can't enjoy recorded music if it's a selection I've learned to play myself. I see the bones and the guts of it, arrayed like cadavers in the music morgue, when I should be getting the lilt. I have gone way out of my way to avoid ever deconstructing any of the music of a certain soul singer, because I never want the magician to show me his trick after he performs it, and I don't want to peek either. I don't want to ruin it by understanding it.

I don't want to ruin it by understanding it. Hmm. Music. Gardening. Love.

It's a geranium. It not the genus Pelargonium of the Kingdom of Plantae of the Division of Magnoliophyta of the class Manoliopsida of the order Geraniales from the family of Geraniaceae.

I think when the sun comes out, I'll sit with my wife on that brick step next to the pots of geraniums, and open the window a little so we can hear, indistinctly perhaps, Al Green sing on the box.

End of story.
Posted by SippicanCottage at 12:09 PM

I cannot believe how beautiful this is. I refuse to call you an artist or worse a writer. It sounds way too... mundane. You are brilliant. There's nothing else I can say.

Thanks for those kind words, and for reading and commenting.