Me And George Clooney Are In Woman's World This Week 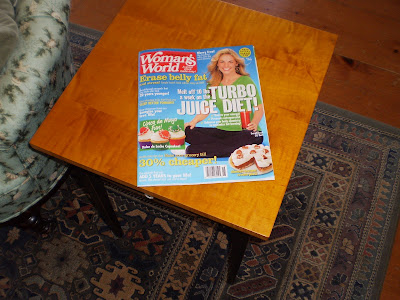 What a fascinating publication.

I know I'm supposed to sneer at it because it's in the check-out line at the supermarket. I suppose a cover that simultaneously exhibits a Turbo Juice Diet and cupcakes is a target rich environment for making sport. It says "God Bless America" right in the title block, which would propel the average hipster intellectual directly from derision to rage. Me, I'm kind of in awe of the thing.

I never looked in one until I was in it. That's not that unusual for me. I've been on TV and in a handful of newspapers and so forth. I've been on some radio stations. Way back when, I was sunbathing at the beach, and a biplane droned by dragging a banner with an advertisement inviting me to go and see the band I was in that evening. It had to be pointed out to me. "Isn't that, you know, you?" I had never paid even cursory attention to any of those outlets or venues before I was featured in them. I'm in the Noel Coward camp on that issue.

But that has no meaning, at least from my point of view. I heartily disdain the common attitude that everything that I don't like, or simply isn't entirely geared towards my world view, is bad and should be banned. I'm not interested in cupcakes or dieting. So what?

The really interesting thing about Woman's World is that like most things that are "square," it's useful to a lot of people and it makes money. Think about that in the publishing world. That's an exclusive club they've joined.

I'd point you to their website, but it doesn't exist. Think of the nerve of that. All the whiners in the newspaper business say the Internet is killing them because they can't charge for their content. Man up, shut it off, and charge for your content. It's very simple.

Pinch Sulzberger would rather give Bill O'Reilly a loufah rubdown than deign to pay attention to Woman's World. But Woman's World charges 62 bucks a year for 52 issues. They have 1.4 million subscribers. The New York Times is a daily, of course, but they barely crawl over the million subscriber line, and likely won't be able to keep their head above the million paying customer line much longer. And since they're hemorrhaging money like a print version of an abbatoir, they're basically paying people to read them, and borrowing money to do so. My wife had to pay $1.79 to purchase a Woman's World today to see if I was in it. If you want to read it - pay, is such a wonderful bet to make, and win at, for a publisher these days.

I certainly have learned more about what the average person wants, needs, and is interested in by reading Woman's World than I would by reading a week's worth of The New York Times. I've known lots of women, and many are interested in dieting and cupcakes - simultaneously or alternatingly, take your pick, - no matter how strenuously they try to convince you they've removed themselves from the hoi polloi.

People will pay to read Woman's World, and wouldn't cross the street to read 100 pages of editorials masquerading as news if it was free. Which one is useful and interesting? Come on, it's science; don't be a denier.
Posted by SippicanCottage at 11:53 AM

Email ThisBlogThis!Share to TwitterShare to FacebookShare to Pinterest
Labels: Bits of my life pulled out and flung on the Internet floor, business, home improvement, shameless commerce

Everyone gets pulled up in the internet popularity gold rush. Only like the top 10000 sites can really charge for advertising, and only a handful really make money doing it.

It wouldn't hurt to have a blog, but to put the whole issue online for free? I recall NYT having their 'premium' where you could read the beginning of the article or something, and then had to have premium to finish it...

Of course, they saw pageviews drop as a result!

So are they paid to be influencers and advocates or to sell newspapers?

The Brave New World sometimes looks a lot like a bread line...

Those magazines are awesome. There's about three or four of them that Wal-Mart carries, all pretty similar although with some differences in editorial decisions. They are just like boiled down versions of what women's magazines used to be, and they don't have three hundred pages of ads featuring nekkid women. (Or fiction, alas, but I think that ship's sailed except in Reader's Digest.) Also, the cheapness of the magazine paper is friendly, somehow. It encourages you to clip, save, and throw away as much as you like.

And that's the thing. I don't have time or room for most physical magazines. Those ones, I can grab and use without it seeming like a lot of work, or that the ads will never end and the content begin.

(River!!
You should stop by and say hi - you've been missed!)

I don't read those (or any magazines, really) myself, but I know a lot of women who do, and I find them oddly fascinating. They contain a little bit of everything, and most importantly, they know their market: busy moms, housewives and women who just want a little of this and a little of that, a couple of creative ideas, a good quick story. They're useful, in ways that the Times is not.

Personally, I'd rather read a newspaper. What can I say? I've never been a woman's woman, I guess.

Still, I confess to having bought one or two over the years. They disappointed me, which is why it stayed at one or two.

But the real point of your post is that YOU ARE IN THE CURRENT ISSUE! And that is way beyond cool, and I may go out and buy the thing in your honour. Congratulations!

Janet- I was being a bit droll. There's a coupon for some of my stuff in there.

And George Clooney's horoscope, in case you need it.

The cuopons may come in handy for when I finaly light on a new home in Ca I'm going to need something other than Crate and barrel stuff.

The magazine is making money and very very few people other than you would figure that out [smart as ever you are]. At the same time, few others ask why that may be when the rest of the MSM is falling down [fiscally] around them.

This magazine could be a good test study of what works!

It is nice to be back here-I must remember to be a more regular visitor.

Hi AJ- Love you more than my folks.