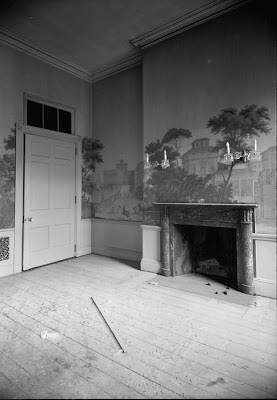 This is all there is of him now.

Oh how he railed at the bankers. Mother would remind him, occasionally, that he was a banker. He'd splutter and rage and Mother would leave to see what the cook was doing and return and neither of them ever missed a beat. I'd watch the dirty urban raindrops make their way down the panes, backlit by the milky sunshine that was our ration at the end of the brownstone canyons, and wait for it all to end. The rain, the impotent rage, all of it. Now it was done.

I wander through the rooms, and they are full of nothing. I never heard it put better than that. A life full of nothing. There was always someplace to be, something that required immediate attention, something that would bring on the stemwinding peroration, to no one in particular, about the hard, cold heart of everyone who came into his line of sight when he was trying to make the column on the left and the column on the right match up. A life devoted to those damn dots.

I never could muster any awe or fear of the old man. He was volcanic, and yet the rumblings signified nothing. The threat of the eruption is daily, but the actual item never comes, and so one develops a certain ambivalence about it. It was always like waiting for the last dull minutes of a boring sermon to end. There was no sin in it, and none in ignoring it. You endured it only, but did not suffer, really.

Father had that Irishman that worked for him. The only one. He was as full of life as Father was full of worms. Father mocked him when he was not here. There was a touch of the obsequious about the guy that my Father loved. "Oh, that Hibernian tugs his forelock and backs out of here like a serf, but you know he's in the tavern right now in his cups and laughing at me, and all his cronies with him. He'll never amount to anything."

Now the old man was done. Mother was gone two decades ago. It fell to me. I'll have nothing to do with this place. It had the smell of the grave in it all along. The lawyers pushed the papers under my nose, with the same dull mechanical mannerisms and basilisk expressions on their faces as their customer, laid out like a Pharoah in the funeral parlor. I suppose they laughed later, too, when they offered me a third of the value of the place, and I took it. I would have paid them to take it.

I'm going to the tavern, to look for a man.
Posted by SippicanCottage at 12:32 PM