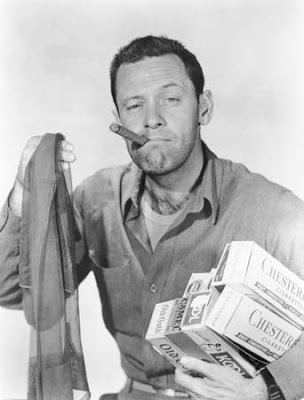 He's got a long resume. I won't belabor it.

He was only a little older than my father. He represents one of the two types of men that post-war veterans like my dad wanted to see on the screen. There was the overtly masculine Holden, and the passively masculine Jimmy Stewart. You can fill everyone else into the two columns as you like.

My father liked Jimmy Stewart. Stewart was a pilot in WW II, and had that self-effacing dutiful dignity the fifties had in spades. Holden was something else altogether.

I remember them both mostly cast as a regular "everyman," thrust into daunting affairs, who shrugged their shoulders, winked, and carried on. Self-reliance was big then.

David Lean is the greatest filmmaker ever. No one will likely ever match a career that encompasses the likes of Lawrence of Arabia and The Bridge on the River Kwai again.

One of the rare and wonderful things that happen too occasionally in films and plays is the encapsulation of great themes into compact settings. Henry V's big speech can be yelled off an empty stage and still resound, after all. The superfluous writ large is more the modus operandi now.

Actors live to be given great things to say, and work and pray that dumb luck and effort will give them a chance to say the magic thing that makes them immortal. William Holden dragged his arse all over an imaginary Burma fashioned in Ceylon for his chance to explain the passing of the dutiful splendor of the British Empire into oblivion, and the concurrent ascendancy of America. It's featured at the 1:18 mark of the trailer:

I don't know if your post was triggered by the passing of Maurice Jarre - the great film composer and friend of David Lean's. I read an obituary yesterday in The Economist: Here's a sample.
"Mr Jarre’s commission was to write the music for it {Lawrence of Arabia}. It was extraordinary that he had been asked. Sam Spiegel, the producer, had heard only his ten-minute score for a French film called “Sundays and Cybele”, written for bass, counter-bass, flute and table-harp. Now he was supposed to produce, in six weeks, two hours of music for a 100-piece orchestra. Back in his room in Half Moon Street he tried to read all he could about T.E. Lawrence, including the huge “Seven Pillars of Wisdom”, as well as searching for that little swatch of notes that might turn into a theme. Search, search, search, search, as Stravinsky said. “Sam Spiegel told me, you have the job of Superman!” Mr Jarre joyously recalled."

p.s. I read somewhere that William Holden had a "drinking helmet" to wear when on a bender

p.s. No producer will allow a long static shot like the one in Lawrence of Arabia where Omar Sharif comes to the well again, ever.