An Excess Of Zeal 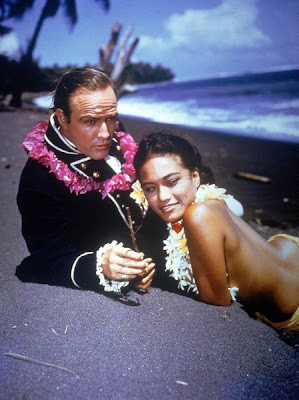 I can't stop watching the 1962 version of Mutiny on the Bounty. It was a sorta flop when it came out, but it's one of those movies that allows for a great deal of reflection over the themes in it, which are profound. Or you could just gape at it. When I was but little, I remember seeing it on a drive-in screen the size of a football field, entirely enthralled with the blue of the Pacific sky and sea. A meal in a restaurant was exotic to us. Tahiti was as much another world to us as any tar on the Bounty.

You have to take Marlon Brando as Christian in the spirit in which it's offered, I guess. He's always interesting to look at, if not always exactly suited to the work. Trevor Howard is an enormously talented guy, mostly overlooked, and is perfect for the job of Bligh.

The theme that that which is allowed is not necessarily recommended, or even tolerated in retrospect, is important, and timely still.

It was assumed that a gentleman would have an internal moral clock that would keep him from what Churchill later called "frightfulness," and so it was best to leave the direction of men to gentlemen. If only.

An excess of zeal.
Posted by SippicanCottage at 11:20 AM

Even though Captain Bligh was considered a villian, he must have been a hell of a man. Managed to get those lifeboats through the ocean to civilization, without losing a man. Went on to deal with Australia (where he wasn't overly popular either.)Christian comes off as a clueless hippie.

Britains old class system was and is much derided but for me it did help society understand that some behaviour is unacceptable.

Watched "The Bounty" last evening - great cast, but I wandered away from it before it was over. I have a feeling it doesn't end well.

But what I liked about it was that the friendship between Bligh and Christian was emphasized.

And who can blame a brit for falling for a topless Tahitian chick?