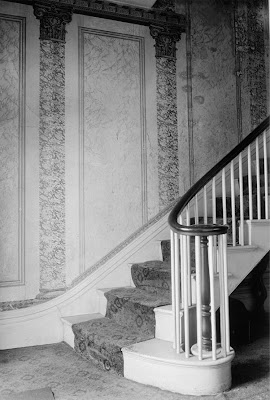 Long after all his help was mold, he'd still descend the stairs like some baron. You'd have to wait there like a peon, hat in hand. Hat in hand wasn't just an expression to him. If he came down and you had a hat on your head in his lobby, he'd turn right around without speaking. When he had a maid or something still left to smooth it over, you had a chance to get at him again. Now, forget it.

He held the sway of money over us. You'd open your folio after the obsequies. The formality of manners was all on you. He'd never speak. But in his way, listening to your entreaty was his way of acknowledging you as a fellow human. If he had no business with you you didn't exist.

He wasn't short, but he'd always stand on the last step coming down. You'd have to hold out the papers on the folder or your briefcase laid on its side on your palms, and he'd take out his pen and sign. Or not. He'd never ask a question or answer any. It was expected that it would all be on the paper. God help you if it wasn't.

He signed every paper with the solemnity of ceremony for the Declaration of Independence. His handwriting was perfect, but florid. It was his art.

The city went to hell and gone all around him. He'd never go outside, and after all the help lit out or died on him, the place had a ramshackle and gloomy aspect. The local kids would saw the little five-pointed nut off the tops of the fire hydrants for the nickel they could get for the brass, and would generally break anything they couldn't steal, but no one dared approach the house, even after the old man died.

It was left to me to close up his affairs. Astonishing that he never had any money, really, that I could find. He would study the world in some unseen way and send a note to our modern day counting house, offering to broker some arcane shift of the numbers from one column to another in some hidden ledger, and the people I worked for knew his name on the paper would make it happen. His name was the key in all those locks.

I could feel the dead weight of his soul in that house. I sat in church every Sunday, and even with the thurible swinging right under my nose and the wafer disintegrating in my mouth, I felt nothing. Stand inside that guy's door for half a minute and you feel like you just broke the seal on a mummy's tomb that maybe you should have passed on by. He was a dread god, my signatory.

My boss told me the man with the fine fist was once filled with bonhomie. He'd travel and sip champagne for dinner and smoke big cigars after the deals were struck. Then his daughter died from the influenza while he was away, and he never left the house again that anyone saw -- until they carried him out. If you ask me, he never left it.

The maid from back in the fifties that drank a bit and got flirty said he wouldn't even let a curtain be drawn back from the windows, because he said he saw the girl he left to the fever in the garden.

They'll knock it down, because no one will buy it. He isn't around to put his name on the deal, after all, and his name was all there was to it.

I knew I shouldn't, but everybody touches the stove once or twice in their life. I looked back at the house. 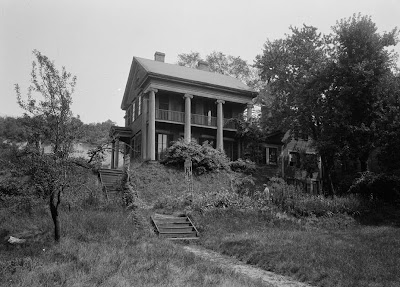 Posted by SippicanCottage at 12:03 PM

Email ThisBlogThis!Share to TwitterShare to FacebookShare to Pinterest
Labels: Bits of my life pulled out and flung on the Internet floor, flash fiction

You been reading Henry James or Edith Wharton?

Hi Eric- Thanks for reading and commenting.

I'm afraid never read anything by either of them. I have seen Henry James' portrait by John Singer Sargent, though, and I was born near Codman Square. So I've got that going for me.

I so enjoy stopping by here. Like the old man's house, your writing haunts me, it has a weight to it that one feels long after reading.

It was the flu, right? You swine, Mr. Havisham!