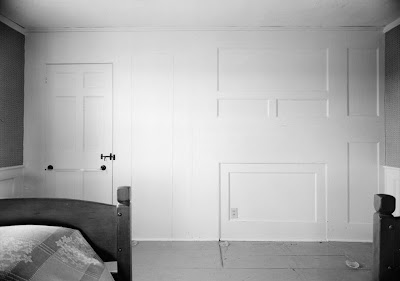 A body knows a room after a while.

Can't be plastic only. The sunlight tells you nothing then; it's all the same day and night and what's the sense in that? It's this swimming like a shark in the nighttime ocean they crave and I don't understand. They want it all the same; winter, summer; young, old; man, woman; happy, sad. They take pills to keep themselves from seeing the light change shapes on the wall and pass away.

It's the passing away they fear to consider. They say the church is for the superstitious, but I've been in the church and everyone in there knows how to behave in the graveyard. The superstition is thinking you are never any closer to taking up residence there. The sun would write it on the wall if you'd let it.

The wall at the foot of the bed is filled with ghosts. I know some first-hand; the others I can make out through the paint. Lives have passed by in this room.

The kids are kind but hurried and foolish. They don't notice little things. The bedposts are squared in a certain way so the beds may be joined together. No need for that now. The clock in the hall bangs around the circle for me, alone, but not alone. What I was given was enough, because I know in my heart of hearts that those that pity me my frailty and time alone never will have such as I had, even for a little while. They wouldn't recognize it if they saw it; how could they ever find it in the first place?

They walled up the firebox and put in a plug for a television for me. They don't know me. Scenes play on the wall already. They said it was dangerous to make a fire in there.

The danger is in no fire, ever, children.
Posted by SippicanCottage at 9:02 AM

For a bit of whimsy, The Shadows...

Oh, I really like this one. You are a master of flash fiction.