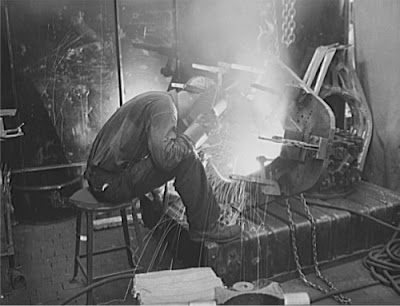 [Editor's Note: If you're just getting here, Sippican is droning on about walking uphill both ways to work in the seventies or something, a continuation of this.]

{Author's Note: It might have been the very early eighties, I can't recall and won't research it. I'd fire that editor if I had one.}

I can't remember what year it was, or the exact address of the place, or a host of other things, but I can tell you what I had for lunch on my first day as a welder in the desert. I can tell you because I had the exact same thing every day for a year. Paper bag was a Toreador Squat, I think. Peanut butter sandwich on wheat bread. Verifine apple juice in a likewise squat little glass bottle with a metal cap and a sort of foam label/wrapper, an apple, a granola bar and a paper napkin. I tried eating the napkin a few times before I lost interest.

You couldn't get an apartment in LA without a bank account and a job. You couldn't get a bank account without a fixed address. I couldn't get a job without an apartment. I can't remember who was governor of California at the time. It might have been Jerry Brown or maybe George Deukmejian. At any rate, Franz Kafka was actually running the place. I picked a day, and simultaneously told the apartment landlady I had the job, told the bank I had the apartment, and told the job I could TIG weld thermocouples all the live-long day, baby. The Million Pound Bank Note is just a short story to you; it's an instruction manual to me. You guys should read less Rand and more Twain if you want to get on in this world. By "less Rand," I mean "no Rand," and "all Twain," actually.

(I put "actually" at the end of that sentence so you'd get the proper Valley Girl vibe that was born in LA at the time.)

TIG means Tungsten Inert Gas. You have an electrode in your right hand and you blast an arc through an aureole of plasma while you feed in the filler metal with your other hand. It's harder to do than other types of welding.

I went to Catholic School, so when I said I lied about welding, I don't mean lie in the contemporary sense. I am incapable of looking anyone directly in the face and lying. The nun is there over your shoulder forevermore. To us, even giving people the wrong impression was considered lying. We didn't parse "is." People mistake it for false modesty now, but it's pure terror of the shades of nuns past.

But it's also just a venial sin, and in the Berretta fashion of being willing to do the time for the crime I figured I could take a few weeks in Purgatory or Limbo or Hell's Kitchen or the Department of Motor Vehicles or whatever God's badboy waiting room is called. A man's gotta eat.

I had TIG welded under a microscope in a clean room before. I wore a nylon smock, sat at a sort of school desk, looked through a little green peep lens, pressed a button and stepped on a foot pedal while a tiny weld was made. But it was TIG welding.

Now it was 5:45 in the morning. You have to start early in the desert or it gets too hot for much of anything. The roof is corrugated steel, uninsulated. There are no windows. I eventually used to see the guys working at other shops on the street in sort of shantytown lean-tos, or just under a roof with no walls, and envy them. We were a more formal business, so we got to work in a concrete block Minotaur's labyrinth with a warming tray over our heads. I'll leave it to your imagination and arithmetic to figure out what time you get up to arrive at a job over fifty miles away at 5:45.

I'm not stupid, I'm just dumb. I know I'm in for it, and have to be prepared. No nylon smock is gonna cut it here. I wore jeans, boots, and a flannel shirt. I brought leather gauntlets.

When people talk about thermocouples, they generally think of the little one in their oven the size of two Excedrin laid end to end. Hmmm.... That's incorrect; no one ever thinks about any sort of thermocouple until you have to weld them or you don't eat. Then you think of them really hard.

There was no money in that sort of thermocouple and the company didn't bother with them. We made them for sticking into thermowells that we also made, which in turn were stuck into oil wells and foundry cauldrons and heat treat furnaces. We made those, too.

A small thermocouple for us was about the diameter of a pencil, a big one like the handle of a baseball bat, and made all sorts of lengths. They are made from a stainless steel tube, filled with a kind of white itching powder they called insulation, with two conductors made from dissimilar metals buried in it. The raw stock came coiled to make it easy to store, and you'd desuage them using a barbaric machine that used a revolving bend to straighten the coil as you pushed it through and held on for dear life. We made the desuaging machine, too, and sold it to other companies who had employees as valuable as the crewmen with no names on Star Trek that beam down to the planet's surface and take up permanent residence there.

Then there's this smell. Did I tell you about the smell?

(to be continued)
Posted by SippicanCottage at 7:55 AM

No Rand? Totally, fer sure!

I just realized -- Barney Frank is your Representative?!?

You get extra bonus points for maintaining a pleasant demeanor and good sense.

PJ: That district goes through four counties. It's absurd.

Kevin White was a screech. He had this preposterous accent. Frank has a speech impediment, which to his credit he's mostly overcome, but back then it was WHARGARBL bad. The two of them together was like going to a snakehandling church and listening to people speaking in tongues. I can still hear White now:

My fellow citizens of the Shitty of Boshton...

When Kevin White left office, he stole the mayor's desk. It once belonged to James Michael Curley, the Boston mayor that makes Huey Long look like a shy, honest man in comparison.

I suffer, I think, from an excess of feeling. You, my friend, seem to have a healthy balance.