[Editor's Note: Rerun. The guy's busy making things besides text. Besides, you all have "Internet Alzheimers" and can't remember what you read last week, so what's the diff?]
{Author's Note: Notable in my mind because it's the first time my Intertunnel friend Pastor Jeff read my blog and marked the occasion with a comment. A decent sort of fellow, that Jeff. P.S.: I think we just coined the term Internet Alzheimers. And there is no editor.}
We had snow yesterday at daybreak. The light was so faint, and tinged with blue, that the whole scene outside the door seems under water. I took a picture to try to catch the light: 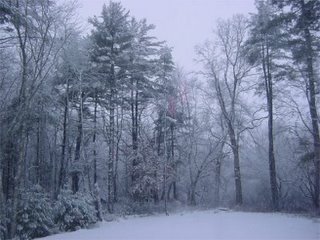 Pine, Oak, Maple, Holly, and a few others mixed in. There are geese and ducks in the water just past the first row of trees. This is the kind of snow we get here in the southcoast; not enough to plow, generally, but enough to soften the barren look of winter a bit.

It's funny to consider that, according to statistics, what you're looking at is farmland "lost" to development. This was all a pasture meadow, for ruminant animals 75 years ago, when sturdier folks still tried to cadge a living farming in New England. The old surveying documents use what few trees were here previously as markers, and they were chosen because they were conspicuous for their lonesomeness. The soil is acid and there isn't much topsoil over the sandy subsoil. You could mow it flat and plant cranberries, but there's such a glut of cranberries that the government pays farmers not to grow them now, after attracting them to the industry by guaranteeing their prices previously.

My deed actually still allows me to drive my livestock across the road onto my neighbor's property to water my herds if I need to; but the cats just drink out of the little dishes under the potted plants, so there is no need to take them up on it.

The land we own covers five acres. About three quarters of one acre is lawn, house, driveway, and plantings. The rest is wild, and will remain so. It's surrounded by thousands of acres of river, fen, swamp, bog, forest, more swamp, brambles, poison ivy, nettles, ticks, and mosquitoes big enough to make you put lead diving shoes on your toddlers outside, lest they be carried off.

Farmland "lost" to development; I think not. Looks like "reforestation" to me. And last time I checked at the supermarket also built on "farmland lost to development," the shelves are filled with the flesh of the creatures that formerly grazed in what rapidly turned into our little pine jungle. They must have found some of that lost land somewhere else, I expect. Or used less land to generate more food is more likely.

Are the cows any sadder, unable to drink my swampwater? I don't know. But the ospreys like it here now. So do we.

Posted by SippicanCottage at 8:32 AM

Email ThisBlogThis!Share to TwitterShare to FacebookShare to Pinterest
Labels: Bits of my life pulled out and flung on the Internet floor, gardening