Dear School Administrators: Your Curriculum Sucks. My Kid Is Fine

A certain video hosting outfit erased, without notification, a video of my kid dancing because some venal grasping grabby entertainment company wants to beat pennies from children for every lick on Hollywood's fecal lollipop, Fair Use under DMCA for mashups and spoofing be damned. So I'm (up)loaded for bear.

That coincided nicely with my son's kindergarten administrators telling us that he's: "unable to express ideas in front of a group, unable to selectively listen for sounds, follow multi-step directions," and our supreme favorite: "unable to to complete assigned tasks in allotted time."

I don't have time to bring the little feller's 522 piece Lego set suggested for 8-12 year olds and stand there while he assembles an entire Beach House, with absolutely no help, using nothing but a 72 page exploded diagram pamphlet. He does it faster than I could do it, but it takes a little while and we're all too busy for that, and I'm not sure 72 pages qualifies as multi-step, because I'm a dolt. Likewise, I don't have a video of our boy fearlessly performing a Smashmouth song in front of an audience of 250 or so at Lake Winnepesaukee when he was just four years old, because, of course, I was busy on stage performing with him at the time. I doubt that qualifies for selectively listening for sounds anyway, as the drummer kept coming in early and the boy ignored him.

A pretty girl sent me a picture of it, though: 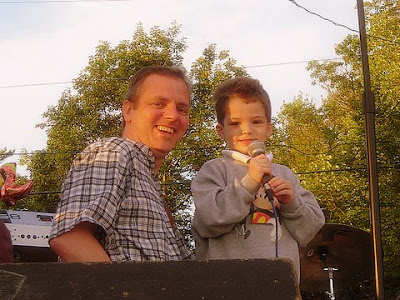 You can tell he's not an adult because adults never hold the microphone correctly like he is doing in the picture. Save your wisecracks; I know he's cute and I look like hell. But cut me some slack, I had a temperature of 104 degrees the night before, as I was suffering from Lyme Disease just then but it was still undiagnosed. I looked like hell but the show went off on time, because I was hired to perform there and we take completing assigned tasks in the allotted time fairly seriously at our house. That assigned task was a four-and-a-half hour drive from our house, but somehow we managed.

The school administrator that summoned us to discuss my boy's "inability to complete assigned tasks in the allotted time" came in, plopped a slovenly 8" thick, undifferentiated and dogeared pile of foolscap paper on the table, and was sipping from a franchise restaurant disposable hot coffee container unavailable in the town I live in. And although the meeting was held at their school, had been postponed twice already, and she has a secretary, she was a full twenty-five minutes late.

My boy has never missed the bus.

So you're "a group." How'd my little boy do expressing himself in that video?

PS: I'm emailing this to the school administrator right now. Should I email her my earlier entry where I exposed another of our school system's teachers masquerading as a teenager on the Internet? No, that would be cruel.
Posted by SippicanCottage at 9:48 AM

Email ThisBlogThis!Share to TwitterShare to FacebookShare to Pinterest
Labels: Bits of my life pulled out and flung on the Internet floor, dancing, humor, life, music

Your son dances like an angel. Tuck and I were rapt. The school administrators feel extremely good about themselves without reason.

The kid's fine. Education in these United States, however, is screwed up. And it's been a long time since education has been about teaching children -- protecting jobs, maybe; trying out social theory de jour, absolutely; political action, of course. But teaching children?

Hi Sissy and Tuck! If you watch closely you can see all the big dance moves. Pickin' the apples. Driving the Lowrider car. Startin' the chainsaw. Pushing the shopping cart. Do the monkey.

Hi Glynn- The people are all nice enough. My little boy's teacher is a pleasant young lady. There seems to be this institutional will that has a mind of its own at this point. A runaway train with no conductor.

Nice people who are "true believers" that children should all be neatly pigeonholed by the age of 5. Ugh. It seems I recall you not having a great opinion of homeschooling, but it really can be a great option for kids who don't fit the mold.
My daughter and I watched your boy's video - what a cutie. You can really see him doing those dance moves in his head, and his body is amazingly rhythmic and coordinated for his age.

Hi Teresa- Thanks as always for reading and commenting.

I do not have a low opinion of homeschooling. It's more like I believe that all children are homeschooled, whether they attend public school or not. Mine certainly are.

The public school is trying to usurp our our authority as parents. The help they offer to us is either superfluous or bad, as the problems they identify are either imaginary or on their end.

My older son was doing his homework last night. He's learning about 1066 in school. Fine by me. His textbook is dreadful. It's in the disorganized collage style, almost devoid of text, that's in favor in public schools now. I just turn to my right 6 inches and pull the first volume of Winston Churchill's History of the English Speaking Peoples off the shelf and thumb to William the Conqueror. Churchill's prose about the Norman conquest, written while NAZIs were trampling Eastern Europe, is poetic and electrifying compared to the intellectual Vegan grocery list that is my boy's textbook. My boy is engrossed by it.

If they asked me, that would be his textbook. But they're not asking me. But then again, I don't need any permission, either.

Personally, I am an sutodidact at almost everything I know. If that's not homeschooling, I don't know what is.

Just another example of the failings of the education industry and not your boy...a boy as we can all see is a credit to you and your wife....do what you have to do to cause these fools some mischief.from the little of you I know I would trust your judgement of the boys abilities father or not.

Can't help but see a replay of the scene from Uncle Buck where John Candy (Buck Melanoma) has a sit-down with his niece's principal.

Thud- They're not bad people. This isn't East Germany. We just sorta smile and shrug and soldier on. The little feller likes going to school so I assume they're doing something right.

As in all things, it's not the trouble that will get you, it's the "help" you must avoid.

Did you really email it to the admins? Because I'd have liked to be a fly on the wall when they received it ....

I am trying to find a school for my son for kindergarten next year, during which he will be six because his birthday is two weeks after their "cutoff," that doesn't make me break out in hives at the thought of leaving him there for six hours a day.

Great phrase, made me laugh!
Those textbooks are written for non-readers - you can certainly see it. Who could read such dreck as that after having read Churchill?

My husband and I are both self- taught to a great degree, both former n'er do well highschool dropouts. Fortunately, neither of us bought the lie that school is the only place for larnin'. As long as a person can read, write, figure and reason, the learning never really stops.
He likes your blog too, and often reads it to his crew on the tugboat!

It's more like I believe that all children are homeschooled, whether they attend public school or not. Mine certainly are.

Bingo. Sometimes you get "How can you homeschool your children?" from harried parents trying to figure out where the time comes from. And then you say, "Well, how much time do you spend with your kids on homework?"

"So who's teaching him?"

"Yeah, the difference is, we get to do it before dinner."

We follow a lot of the IAHP stuff and they say there's nothing wrong, necessarily, with sending your kids to school--you just have to school-proof them first.

I'm curious, were they trying to get the little feller on drugs? What was the proposed resolution to these imagined shortcomings?

Unfortunately, the coin of the realm in government schools is usually conformity.

Hi Blake- I'm sure there's all sorts of horrors available further on down the menu of "help," like the drugging you mention, but since we refuse to even eat in that diner, I don't know exactly what they were trying to cook up.

We never will know, either.

One of The Boy's teachers tried to convince us he was autistic.

"I believe that all children are homeschooled, whether they attend public school or not." Excellent! Any parent that would hand his offspring Winston Churchill in lieu the dreck that passes for text books these days is a gem indeed and his children the richer for it.

Hey! That book's not in lieu. I paid for it.

I merely meant to say that your taste in historical works is impeccable and your children will be much rewarded for having read them.