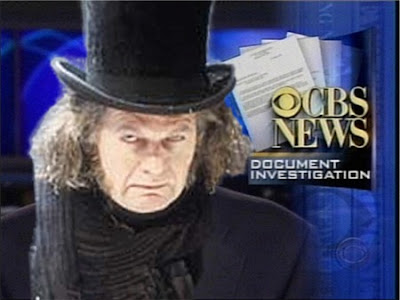 A Christmas Carol has redemption in it, but it's a grim piece of business. I don't mind that. Dickens was kinda full of it most of the time, anyway. He was constantly describing a bleak, humorless, changeless world of fingereating factories and economic desolation that disappeared while his ink was still wet, and was probably never as bad as he thought it was in the first place. Doesn't matter. No fiction writer should worry too much about being evenhanded. It's OK to be a monomaniac if you're good at it, fiction or not. Studs Terkel didn't write for Fortune magazine, either. Tend to your own garden; let someone else take care of the rest of the landscape.

Scrooge is all wrong, or at least backwards, for our times. Scrooge was a benighted individual, twisted by his circumstances, but ultimately redeemed by the good example set by everybody around him. He's not dumb, and it dawns on him that the hoarding of everything, including --especially-- his love for his fellow man, brought him no pleasure; and he can't help but notice that people that he considers fools and knaves are happy despite their circumstances. He has his epiphany, and we ours watching him.

The tale is backwards now because Scrooge was alone in his misery, surrounded by plenty and bonhomie if he would just partake of it; we are now multitudes; nations; a veritable globe of hoarders and schadenfreude peddlers, searching for any last outpost of goodwill towards others, simple pleasures, or just plain harmless fun that can be vilified and then dismantled.

If there is a pulpit, a pedestal, a proscenium or a podium where the milk of human kindness is being dispensed right now, I've missed it. Half of the population thinks the government should do everything for everybody, which is a cute way of saying I'd like to do nothing for anybody, and there may be a few things around the margin of that largesse I could wrap up and put in my freezer; the other half is talking about hoarding gold, bullets and Spam, which is just a cute way of rationalizing why being a cheapskate and friendless jerk was a wise plan in the long run. You can take your Ayn Rand and your Ned Ludd alike and shove...

See, now I'm doing it. I'm drifting through this bizarro Scrooge and Marley world, and it's getting to me. It's backwards and no one sees it. Mobs of competing Scrooges roam the streets, statehouses, newsrooms and vestries, looking for some remaining opposition Tiny Tim, to yank the crutch from his arm and smash it because the store he bought it in wasn't unionized and the greeter didn't have acupuncture with no co-pay included on their medical. Or maybe Tim's in a union and we can't have that. They're pulling the drumstick from Fezziwig's mouth because he's a fattie and it's dark meat filled with transfats and they're under interdict. The one coal in the grate Bob Cratchit warms himself by is stamped out because it emits too much carbon, while they tell his wife maybe she shouldn't have so many kids and then she could feed them. People with trustfunds or sinecures stand around in a chorus and talk about how some misery might build a little character in that Cratchit clan.

We think if we could only find that one last Scrooge and pry what we want for ourselves from his miserly hand we'd be happy. That would be bad enough, but I'm beginning to think it's even worse than that: We're a marauding army of Scrooges looking for one last Tiny Tim to beat up for his lunch money.

Maybe we should look for that last Scrooge in the mirror. I'm doing my best to avoid seeing him in there; I'll be by the fire with the last remaining Tiny Tims, while the zombie hordes of Marleys desolate the landscape outside. You're welcome to join us.

We are not daily beggars
That beg from door to door,
But we are neighbors' children
Whom you have seen before
Love and joy come to you,
And to you your wassail, too,
And God bless you, and send you
A Happy New Year,
And God send you a Happy New Year.

Posted by SippicanCottage at 7:36 AM

I'm just about to settle down with the family to watch the Alaistair Sim version of scrooge...a real christmas treat...Merry Christmas Sipp to you and your family from all of us over the water.

Not only are we all Scrooge, Sippican, but you -- unfortunate lad, are it:

I like your observation. Seems like everyone is grouchy these days, including me. I see more Scrooge in me than I would like to. No need to go into a lot of detail on what makes me grouchy - just cruise the blogs or read the news. Maybe I should just disengage for a month or so. Anyway, thanks for the post.

That was an extraordinary post. Worthy of Dickens on his best day.

And as for the day in question, I hope Christmas finds you well and full of cheer.

Merry Christmas to you and your family.
What a memorable Christmas post, as thoughtful as last year's.

(Any chance of going to the backroom and shuffling through the files to find that one? After Christmas, of course, this one should stay on top.)
-Deb in Madison

Well, I dunno about that, but you, like Dickens seem to be trying to advance humanæ litteræ as it were, although, my friend Pompey says there's enough human litter around as it is, but he's got a peculiar view of people.

Anyway, just keep writing. And a merry xmas and a happy new year to you too.

I've gone through to the other side.

Don't have any reason to have more bullets. We've got the food that we have.

I have a job. I haven't seen a Saturday since October. It's good. Real good.

The only news I get is the lede on the local radio top of the hour news - sometimes not even a network production. Until that story becomes "Washington has told (insert name of mismanaged and /or obsolete business model, victim/pimp group) to file for bankruptcy or liquidate" there's really no reason to listen.

Obama's current staffing picks make it clear he knows he's over his head. It's going to be Bush Lite on international affairs and soft (as much as the Dem/Rep machine infecting both houses of congress will allow)communism until the pain gets really bad... then he'll replay all of FDR's worst tinkering and mistakes, just faster.

But I am loving life. Smile on my way into the hole at 0615, and smile tiredly walking back to my truck around six or seven, every night, six days a week. Kiss my wife morning and night, and buy hard goods and pay down what's left of the reasonable mortgage with the pay...

Merry Christmas, to all, and to all a good night.

Maybe that's why I feel so left out. I missed the whole hope and change feel-good moment and couldn't get worked up about PEOTUS's birth-certificate, either.