Never Pick Fights With People That Buy Pixels By The Kilojoule 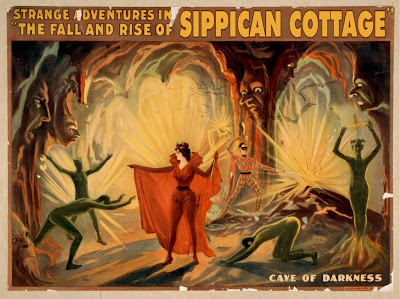 Ladies and gentlemen, I'm just a caveman. I fell on some ice and later got thawed out by some of your scientists. Your world frightens and confuses me! Sometimes the honking horns of your traffic make me want to get out of my Ford and run off into the hills, or wherever. Sometimes when I see videos on my Intertube machine, I wonder: "Did little demons get inside and draw them on the cave walls?"

My older cavecub's junior high school has an Audio/Visual club. They limit the amount of cubs they allow in it. My cavecub got passed over.

Caveman Woodbanger is supposed to be sanguine or mystified or peeved or whatnot. But Caveman Woodbutcher knows all about the ability of your average school teacher to see the potential in a cavecub. Caveman thinks we expect too much of teachers in many ways; there are a lot of cubs and they're not mind readers. I cast my mind back to when the dinosaurs and I roamed the Earth and my own high school wouldn't allow me to take shop class no matter how much me and my troglodyte parents tried to convince them to let me. What a waste of everyone's time it would have been to let me at any tools. They knew I'd never stick with it. I must go back to the runes. It's not that caveman and cavecub care all that much. Everyone gets to do what they want as soon as you grow up and leave the Secondary Cave. It's the intergenerational monotony of the thing that strikes caveman funny.

Likewise, what a waste of time it would be to let my cavecub into the A/V club. I'm sure it's loaded with cubs churning out videos like these, using nothing but the obsolete video editing software that came with Windows; Vixy; cave cartoons found on YouTube; cavetoys found in littler cavecub's room; an eight-year-old digital still camera; and help, encouragement, and bad jokes from their old cavedad:

I see the teacher who runs the A/V club has the kids entering things on Smith Magazine's Six Word Memoirs. Oops. Not exactly:


For the last four days, I have done nothing but email teens who are finalists for our upcoming teens-only six-word memoir book. It’s hundreds and hundreds of stories, plus some pictures, some advice, some tough questions, and some secret-sharing of my own. Today, I got a reply informing me that a memoir Larry and I had selected wasn’t written by a teen at all, but by their teacher, testing the waters.

I just fell off the mastodon wagon, but I don't think you call that "testing the waters" in publishing. At least not in depositions, anyway.

That's OK. My cavecub's picture has been on Six Word Memoirs for almost a year already. But I wrote the blurb and took the picture; he and I are too far to the left on the evolution chart to ... ahem... test any waters.

So Unfrozen Caveman Woodbutcher is here to praise my local schoolteacher. Put him up on the Mount Rushmore of edumacation with Horace Mann and Christy McCauliffe and Aristotle. Even an unfrozen caveman can see that his assistance in helping us avoid exposing our cavecub to strange old men that masquerade as teenagers on the Intertunnel has really been first-rate.
Posted by SippicanCottage at 9:46 PM

Man, I feel you've gone all Dr. J with your posting these days, my friend! Sublime, and playing "above the rim," is what you is...

If I believed in that sort of thing, it'd be humbling!

Thanks Ron. I like your recent avatar picture. Cheers!

Hulk-Boy not get into club, either.

Club not so fussy now that everyone squashed.

Hulk-Boy is happier without flat friends...