"I am under no illusions as to my pictures. I am not an artist, and it is most disagreeable to me to be called one. I am a clergyman with a love of the beautiful." 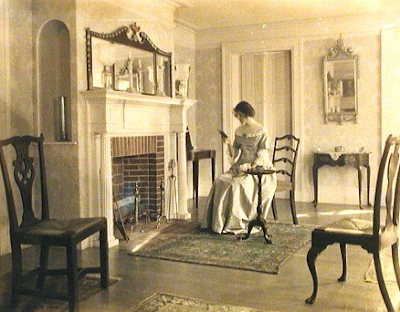 I look for examples of antique furniture online. I've noticed an interesting phenomenon; museums have crummy websites. I bet they don't think they're crummy. I imagine they think they're swell. More about that later.

I'm interested in Wallace Nutting. If you've never heard of him, that's understandable. He's not exactly Britney Spears, but he was fairly notable in his way. Born at the dawn of the Civil War, passed away at the start of WW II, to my endless amusement he hailed from a place called Rockbottom, Massachusetts.

He was the bluest of bluebloods. Pilgrim ancestors, Phillips Exeter Academy, Harvard. He was a minister, and then he started his second career as an antiquarian when he was about 45 years old. Sounds partly familiar. He first took pictures while out in the country, and later employed a staff of ladies to hand-tint them. They were nature scenes at first, and then he began to buy and renovate colonial houses, furnish them in period style, and depict domestic scenes using models dressed in period clothes. Here's one called Backgammon: 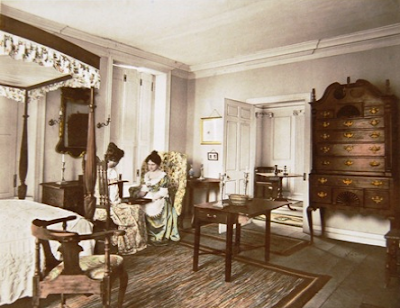 They were often referred to as "chromos." He sold ten million of them from a catalog. He wrote books about his peripatations. I have a copy of a few of them. They're like reading a somber version of Henry David Thoreau's Cape Cod. If Nutting ever told a joke, I've never heard about it. He made his contemporary, Calvin Coolidge, look like W.C. Fields in comparison.

He opened up a few houses as museums. He was always hustling, so you could pull something off the wall and buy it if you had a mind to. That brings us back to museum websites. Nutting was a colleague of a fellow with the triple barreled name of William Sumner Appleton. Appleton was a founder of the Society for the Preservation of New England Antiquities. Appleton and Nutting went in on some projects together, and Nutting contributed his words, pictures, and items to the Society.

But Appleton and his SPNEA brethren didn't like the taint of filthy lucre on their history. They had a falling out over Nutting's commercialism, and they went their separate ways.

Nutting opened up a shop making reproduction furniture. His furniture, though it's less than a hundred years old, is collected as if it was original. His books are highly prized, though most are out of print. I refer to Nutting's Furniture Treasury all the time.

I can find all sorts of information about Nutting and his furniture, furnishings, and opinions all over the place, for free or for short money. The SPNEA? I can't help noticing their website parses out information with an eyedropper, desperately trying to coax you to spend some money to get them to part with it. They're now trying everything they execrated Nutting for then, renting out restored properties for weddings, licensing copies of antiques and selling them, along with the usual begging.

I can go to an auction house website, and get dozens of high-quality photos of all sorts of antiques, along with measurements and a little provenance, and it doesn't cost a penny to look. The auctioneers aren't doing it out of the goodness of their heart. But Adam Smith will tell you it doesn't matter why it happens. The SPNEA website wants to show me a dreadful slideshow using the execrable RealPlayer plugin. No thanks.

No profit is made, no doubt, and thank god for that. It all must go to keeping trustfund babies employed at above market wages, harrumphing at cocktail parties about mercenaries like Wallace Nutting, and people like me too, I suppose, while they hoard the information they should be trumpeting everywhere and charge like a phone-sex line for what little they deign to mete out.

Hey, look how well that worked out for The New York Times. I'm sure it will turn out swell for the museums, too.
Posted by SippicanCottage at 8:04 AM

Ah, the memories. I'm going to have to look for those five or six Nuttings I own in the boxes in the basement.

Time for a new exhibit!

(And why is my secret word to verify the word "fitish?")

Heh. Down in the basement in your houseboat?

The houseboat, you insufferable twit, is the OTHER house!

I was going to order my entire other house to be filled with handcrafted furns from Sippican, but now I'm just going to default to Danish Modern.

Hey, I'm not lace curtain Irish. I'm not even two toilet Irish. I'm an ignorant bogtrotter. The only "other house" my people ever own generally has a half-moon cut in the door and a Sears catalog hanging on a nail inside.

You can find stuff down in the basement, there, too.

Is Danish Modern the donut with the sprinkles?

"generally has a half-moon cut in the door and a Sears catalog hanging on a nail inside."

Mine has a copy of the works of Aristotle. We're up to the section on Ethics now.

And the donut with the sprinkles is called "The Danish Modem."

You're a jelly doughnut?

I generally find my ethics not far from the toilet, too.

I could tell you all stories about this sort of thing. The little historical associations that are run by a county government somewhere, with 'day camps' for school kids and attempts at 'reenactments' of some event by tubby bearded guys with muskets that they sell tickets to see and old aristos 'borrowing' the antiques for their own homes while they're on the board of trustees.

The sad thing is that there is so much interesting stuff in these collections that nobody is ever going to see. Although, you have to be interested in that stuff in the first place.

Don't get me started on The Smithsonian! It's terrifically frustrating to KNOW what things they have in their catalog that they don't bother putting on the website, or even acknowledging that they have!

Your blog is absolutely delightful. From the great posts to the comments they inspire.
Definitely bookmarked.

As for the sad truth about museums:

When it comes to showcasing great art and collections over the internet, bloggers, art lovers and interested individuals do more to make this kind of information available to the public than many museums ever did.

Thanks, Cyfree. You are in good company here.

Don't mean to bad mouth but many museums have bad websites, bad viewing options, and terrible 'stores,' selling all new, crappy repros, or outrageously priced unncecessaries.
Unfortunate for them with much better opportunities on websites who are passionate about their collections and as you say don't charge to view. Also, it would make our hair stand up if we knew what lay in museum warehoues and basements, secret things they won't publically acknowledge. Is the Smithsonia hiding bones of an 8 ft., ancient human culture found in the US? And what kind of collections would Right-Patterson Air Force Base, or any Gov't Bldg in Washington, D.C.be hiding in their basements??? Now there's a book: What's in your basement?! Hmmm, could I get a grant to investigate interesting warehouses and basements?? But I can't utilize 8ft. human bones, or aliens from Right-Patterson like I could utilize Wallace Nuttings impeccable furniture, or Roycrofts, or Stickley's, or Rookwood's pots, etc. Wish I had some of Nutting's anything in my basement. I just found your website. Apologies for this ridiculously long response. Betty.

Hi there! I hope these posts are not old and I'm wasting my time!

I am sitting here looking at two Wallace Nutting prints, they appear to be signed. They are colorized as you explained and they are beautifully done. Both are of ladies in their homes...one coming down the stairs, the other with her hands in a box on the desk. I LOVE the scenes outside her windows! These are my mothers pictures and I am just researching them for her. Was wondering if they are pretty common or if they are worth anything. You seem to know a lot about Mr. Nutting so I thought I would ask you.

I hope to hear from you! I enjoy reading your articles. Thank you in advance!

Hi M.- Thanks for reading and commenting.

I can't appraise the value of your prints. However, this fellow can: Michael Ivankovitch.

You are kind sipp. Toooooooo kind.

Oh wow... a Nutting gallery! The man is all over the place. ;) Thank you so much. I'll have to see if my mother wants an appraisal.

Thanks again! I appreciate it.

YES, c'est moi. I monitor every move on this site.