Whatever You're Afraid Of Has Already Happened 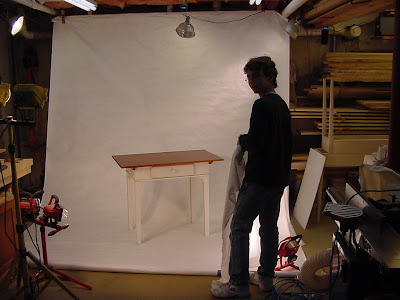 Taking the picture is not making the table.

The news media is decidedly uncurious.

To be curious is to ask questions because you do not know, but would like to. Asking "intelligent questions" doesn't mean you are a self-appointed expert on the matter at hand. That's a debate, and you're not even supposed to be the moderator of any debate, never mind a participant, if you run a newsy printing press. You're supposed to be a stand-in for an audience member who can't make it. If you dispute with the object of your attention, you are not even trying to elicit information. You are trying to disseminate competing information, by stealth and fraud. Get another job. You're not suited to the one you have.

There are a hearty handful of TV shows on air right now that involve pointing a camera at people working. Did you know people work, and make things? And the shows aren't all Potemkin jobsites like all the home improvement programs that show pregnant women in flip-flops doing their own bathroom demolition -- while the camera' s on. My little son watches "How It's Made," and there is nothing in that show but that most sublime ingredient: curiosity.

I can't remember and don't care what the economic theory is called that posits that digging a ditch is a worthwhile endeavor but being a manager of ditch diggers is not, because I am capable of running a real business, but not credentialed to teach it in a school where everyone will never go out of doors and no one has any idea how the real world works. And I can dig a ditch.

Many who visit here seem to think of me, kindly, as a kind of noble savage; but I'm not like that. My usefulness to a spectator is not limited to being the subject of an intellectual vivisection. I don't need someone from the Ivy League to tell me what I'm doing. I'm doing it, and I'm aware of it. Most of the unsolicited advice cum coercion I receive from the halls of academe and all the solons is coming from people that couldn't do much more than cadge a sinecure in a million years, and don't know what's happening with anyone else who is even microscopically different than they are. They're not about to ask me or anyone else anything, ever. They talk among themselves and pontificate. Pontiffs are for Rome, dudes. I don't pray in your church.

I started out to say that many are talking about the sky falling, but it's an imaginary sky and so their terror is amusing and stupid to me. Others are warning me that things that have already happened to me are going to happen to me, so look out. Thanks for nothing.

I tried to buy a piece of machinery a little while ago, to expand my business. Your fears of credit drying up are amusing, as all small businessmen's lines of credit, including mine, freaked out almost a year ago for no good reason, so save me your warnings about it getting bad. I got a notice from the machine tool supplier that the item wasn't coming and they didn't know when it would. And their competitors went out of business. And the alternatives still available cost triple and aren't as good.

For the first time in decades I had the money I needed and the promise of the business I required to support a purchase, and I could not get my hands on the thing I wanted, for no discernible reason. A kind of freakout is required to disrupt this supply chain. I'm not buying Hadron Colliders here; it's 19th century stuff. And I'm back to 19th century supply chain, apparently.

Do you know how traffic jams on the highway work? They're fascinating. You'd think as vehicles are added to the stream, the progress of the whole would be incrementally affected. It doesn't work that way because people are not robots.

Someone tries to race ahead. Others creep up too close on the car they're following to thwart the lane jumpers from butting in in front of them. And then someone gets nervous, or sees the long arm of the law by the side of the road. Even if they aren't sure they're doing something wrong, they tap the brakes. And the tailgating traffic, aware only of the bumper in front of them, does the same, and the traffic compresses like an accordion for no real reason. There's a lot of horn blasts and finger waving and the cops usually ignore the guy driving eighty in the breakdown lane and arrest someone because their paperwork is not in order. Then everyone slows to rubberneck at the malefactor pulled over and smugly harrumphs, like zebras at the watering hole when the lion eats someone else.

Don't worry. When you're all done freaking out, some of us will go out ahead and obey all the traffic laws as well as the laws of common sense and the same number of cars will flow smoothly along again. Be careful of larding up the traffic laws or it will take longer.

When everything's fine again, Maria Bartiromo will claim she did it by asking Ben Bernanke an inappropriate question.
Posted by SippicanCottage at 7:27 AM

YEAH! How It's Made is a front-running favorite around here too.

In response to the recent political and economic caterwauling. I actually made something; a 6 foot plate rack to fill a really odd space in our 100 year old badly angled house.

I am almost done, and it seems like the only thing I have actually accomplished all year.

The results of my actual job seems to have evaporated, which has come to resemble a restaurant. The tables get cleaned, and then you start all over again the next day. One day, and one year, seems much like the other.

But I went to school with a bunch of fundies who never seemed to understand why I didn't buy the necessary books, but rather checked them out at the library. I have to admit I was ashamed then; now that thinking pisses me off.

I have no illusions about my job or my status. I am an employee who only can ask how high when told to jump. Each year we are asked to jump slightly higher.

But I am almost 50, and my legs don't do that so well anymore. And when I am gone, I will rapidly be forgotten, like everyone else has been. That's the nature of being a machine's cog.

So I thank you for your blog. I come back now and again for inspiration to create, to do. And for that I am grateful.

Pontiffs are for Rome, dudes. I don't pray in your church.

This election has gone on forever. I'm tired, and only part of it is because of the endless, and tedious, finish carpentry on this project we call our house.

That said, the actual voting experience this morning was refreshing. Normal people, gathering peacefully, waiting their turn. Everyone serious, but not somber.

Anwyn- That is your table in the picture.

Pogo- Always nice to see your name. We are fellow travelers, you and I.

Eric- You know the secret knock for our clubhouse, so you get to nick what you like.

Stuart- You always remember things you do yourself. Things you pay for fade.

I always vote. I enjoy it. I live in a small town and we drop off our children at the school and walk a block to our town's little Music Hall, across the street from the ocean.

I never pay all that much attention to politicking, though. The dullest people in the world are politicians. They're only interesting if they're terrifying, and so I have no use for them either way, generally.