What The Discerning Woodworker Listens To 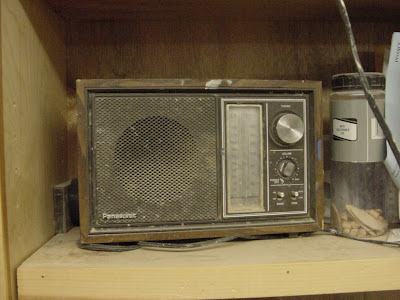 I'm in a good mood lately. I'm under a tremendous amount of pressure but I don't mind. If I wanted to be a nine-to-fiver I could have stayed in the cubicle farm.

The fluorescent lights buzz like crazy. On top of that, I've got tinnitus from too many music jobs, too many pneumatic nailgun blasts, and the fever of 104 I had from a tick bite. You think I'm a woodworker, but in my mind, I'm a beekeeper.

I got tired of sports talk radio. It was fun for a while to listen to schlubs foam at the mouth about offside calls like Robespierre outside the Bastille, but I did a little thinking. Entertainment makes people unhappy. I'm a people, too.

I used to run jobsites with many disparate people working side by side. The radio was a constant source of annoyance and trouble.

The rednecks would want seventies arena rock. The mechanical trades usually had sort-of Goth types with lots of tats that wanted to listen to speed metal. The tilesetters were often more urban and wanted hardcore kill whitey thumping. The concrete finishers were all Brazilian and their radio had announcers yelling in that "I just scored a goooooooooooaaaaaal" over-the-top style between wild salsa numbers. The truck drivers wanted country. You could fill in all the other points of the compass with everybody else.

All the subcontractors would bring in their own, very big radio and the fight would begin. Sometimes actual fights, and believe me, if you were an ultimate fighting champion you'd take one look at some of the dudes that used to work for me and take a pass. They made The Road Warrior look like a Disney movie, and they weren't acting.

I was their lord and master on the jobsite, and I only had one rule: If anyone complained, I turned them all off forevermore. Many a job was built in total silence, too, because we can't just all get along, at least not at first. They all got along great with each other when joined in a unanimous hatred of me for nuking all the radios, so it just goes to show you I'm a Uniter, not a Divider.

They would never admit it, but they were all happier with the radios off. Even the stuff they fervently adored made them moody and cranky. I noticed that they'd grumble at first when working with nothing but their own thoughts and their tools but ultimately they were less likely to kill one another. Fewer tools were thrown.

Sometimes you have to realize that what you think makes you happy actually makes you sad. By "sad," I mean: a raging angry spluttering jerk. Hairshirt self-abnegationists won't help us deal with this. They always end up tapping their feet in airport men's rooms or something anyway. But people can convince themselves, usually after a long period of making themselves miserable, that maybe they could live without all the self-inflicted wounds that make the slings and arrows of outrageous fortune pale in comparison.

I decided to stop listening to people being upset for no reason. It doesn't matter if you're not like that yourself. Sooner or later it seeps in through the pores no matter what you think.

When I used to play music for money, I didn't care much what I was playing. They were just musical bricks to be laid. By good fortune, I fell in eventually with people whose only criteria for choosing material was that it be fun. Guys would come up to us and ask us to play Freebird and so forth, and we'd gently inform them that we didn't care what men wanted. I've played Brown Eyed Girl three consecutive times because girls wanted to hear it. The girls were happy and the men stayed to be around happy girls. I learned from that. People like to be happy. They think they don't, but they do.

So I've drilled a hole in the office floor, and put a satellite setup of computer speakers in the workshop downstairs, and I bookmarked Musicovery. And in a fit of saving myself aggravation, I uncheck all the boxes except classical. And then I click on the chart for the mood, and nail it dead-on "dark and calm." The useful but insane people that run Musicovery think music Hitler had piped in while he blitzkreiged Poland is "positive and energetic," but they're not fooling me. You bring a positive attitude and energy to the proceedings yourself; the Ride of the Valkyries won't help.

Satie. Bartok. Chopin. Mozart. Beats the hell out of Brahms Third Racket over on the uplifting side, never mind a steady diet of Guitar Hero brainbashing.

I banish the bees in my head. And I listen to music literally taken off the walls in a concentration camp, and think to myself: People are wonderful. Life is great.

Posted by SippicanCottage at 7:44 AM

My dad must not like to be happy, because he listens to Rush Limbaugh when he makes furniture.

See the people standing there who disagree and never tune
And wonder why they don't get on my radio.

I'm painting my bedroom in the colourful way
(Some day)
And when my mind is pondering
There i will go.

I've been listening a long time, but I still haven't run out of Bach, Handel, Beethoven, Vivaldi, or Mozart.

Altering song lyrics on the fly was our specialty back in the happy hour days. My friend Steve came up with the greatest mondegreen ever, from Lucy In The Sky With Diamonds:

A girl with Colitis goes by...

Pandora is great, too.

But damn that was good, Sipp.

I've gravitated towards silence these past few years. The buzzing in my head comes not from tinnitus but from talking all day. I enjoy not saying a word for hours at a time. Some people are energized by conversation. It's my job, so I gotta talk (mostly asking and listening).

I find it draining, like I've run 10 miles. Later, after being and nothingness for a few hours, a few minutes of an instrumental tune helps melt away the anguish I absorb from the people I see.

At these times I find First Light from Brian Eno and Harold Budd's The Plateaux of Mirror beautiful and very comforting.

The most difficult terrain we'll ever conquer is the six inches between our ears.


Sometimes the six inches between my ears couldn't be crossed with a space ship. It's felt much that way this last week.

I've been hired to do layout for a multilevel parking structure that covers a city block. To have such a plum fall in my lap at such a time of economic uncertainty is an unalloyed blessing.

But I am allowing myself to be intimidated; there is new (absolutely state of the art)equipment to master, reporting procedures to learn (or implement, since I've seen a lot of variance in practice between the other surveyors), and the pressure inherent in a project that was handed to the company because the previous contractor failed to keep to schedule.

My performance in the field will be driven by just what the trades need at any given moment, and if I can embrace that reality instead of imagining every single technical aspect of the job that might go awry, I'll be in much, much better shape.

I wish the job wasn't fifty miles away in the heart of a city. But they want iced tea in Hades, too.

Again, thank you for this post. Thanks to ruth anne adams, too.

Gorecki’s 3rd is an eloquent lament for the 20th Century. The words written on the Polish Gestapo cell by an 18 year old girl are:

No, Mother, do not weep. Most chaste Queen of Heaven, support me always. Ave Maria ”.

More about it here.

What I listen to at home when I work is the Beatles, but not the albums but the studio outtakes! Their working, I'm working...they call each other dirty names, screw up the takes, generally have a blast...

Work Ambient I call it.