If You Lived Here, You'd Be Crapi Now 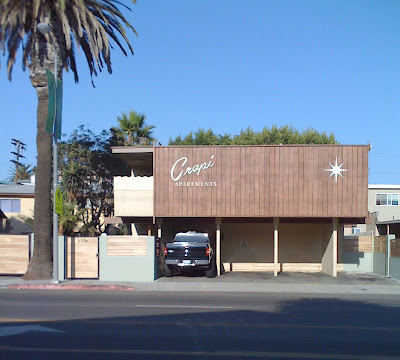 This is the Intertunnel, so let me first assure you that the picture has not been altered. My nephew took the picture on his way home in Venice, CA.

When I was young, my Father would take us to visit our relatives in Boston, and we'd drive by an apartment building that was essentially built in the median strip of Storrow Drive. It featured an enormous billboard:

If You Lived Here, You'd Be Home Now
Dad's a wag, so he'd have a different version of it ready every time we drove by it.

Anyway, naming your buildings, and the neighborhoods they're in, is an American art form. There's a list of only a dozen or so words allowed for naming tract-house neighborhoods, which can be used in any combination of pairs to differentiate your cul-de-sac slice of heaven from the benighted troglodytes that live two streets away.

You can get an extra four grand at closing if you're a developer if you add "Old" at the front of your two word head fake, and "Village" at the end. Little known fact.

The same urge for gibberish that brings us terms like: "Person of Color" has crept into the proceedings now, so developers that name the streets after their children now tart up the process by calling the whole shebang:

THE ___________ at _____________.
The first blank is increasingly filled in with "Preserve," instead of "Homes," to pay homage to the dual gods of agoraphobia and environmentalism while you're bulldozing a wetland full of snail darters and bald eagles to fill it up with snouthouses. You can stick "Estates," or "Residences," or "Homestead" in there; doesn't matter, really. "Village" seems to crop up here again. I see many more people put "Plantation" in there, lately, which conjures up all sorts of imagery, doesn't it? I guess it's OK, as everyone that tends to the crops outside (the lawn) is Central American now. I can't picture the aforementioned person of color being too enthusiastic about moving back to something called The Plantation. Maybe it's just me.

For the second blank, you just ram any combination of any two words from our list in any order and you're golden.

When you get old and need a diaper again, you can always call it: "The place at the thingie, there," and everyone will know what you're talking about anyway.

So the Crapi isn't so strange, really, is it? It could be just some horrible mistake at the Capri sign shop, but who knows? Venice, CA is named for Venice, Italy, of course. I lived right down the street in Culver City for a while, a long time ago, and I noticed the similarity between Venice, Italy's storied canals and the drainage ditches filled with flies, dead dogs, and puddles that adorn the American version. And watching rollerskaters roll by wearing thong bikinis over their pneumatic boobs is just like feeding pigeons in front of St. Marks Cathedral. So maybe the fellow that built the Crapi knew exactly what he wanted to name his building after: The Italian word for more than one female goat.

Not that there's anything wrong with that.
Posted by SippicanCottage at 7:07 AM

I've noticed the same thing about subdivision, er, development, er, preserve names for years. As a programmer I've always wanted to write a program to generate all the permutations and then go trademark them all, but (a) I'm lazy, and (b) I'm cheap.

You forgot one thing, and that is if you use "Old" (or better, "Olde") then there better be other Ye Olde English affectations in the name, too:

The Village at Olde Stonewoode

Ah, for a bit of levity and realism:

The Shacks at Olde Millworks
The Trailers in the Park

Ah damn. Jim beat me to it. Paul Fussel, in his book "Class" mentioned the same phenomena of 'Ye Olde' sorts of names. Its so true. I lived in an apartment complex named "Wynbrooke" once.

I lived in a neighborhood once called "Eagles' Pointe." First of all, if ever there were eagles, they were long gone by then.

I just informed the wife she is a person of colo(u)r...she asked me to tidy garage...no change there.I own a pub called ye hole in ye wall...I hate the title but as Liverpools oldest the regulars kind of like it...so sod it.

I do suppose that 'Alameda Lakes' does sound better than 'the old Alameda road sand pit... which is what it was.

That looks like one of the apartment buildings the family was fleeing from (one step ahead of the landlord seeking a few months back rent) in the excellent movie, The Slums of Beverly Hills.

I do maintenance work at a place called "Villages of Woodholme".

It's a nice enough place, even if it is a 55+ "community" (the lack of children makes it vaguely creepy).

But the name has always tickled me-- it's built on the grounds of a one-time state hospital, now converted into a private nursing home, with the 55+ housing built in clusters around it.

The place might have been wooded once, but no more. And just what the heck is a "holme", anyway?

A "holme" is a small island, usually in a river, or at least close to shore..

After living for 10 years in contemporary Britain, "estates" has a whole different meaning for me from the one intended.

Three random comemnts:
Joel Garreau observed in "Edge Cities" that most subdivisisons are named after the flora or fauna that was destroyed to build it: "Endangered Species Estates." Or Eagles' Pointe.
There is a huge new subdivison outside Phoenix with a lovely Spanish sounding name. The developer admits it has no meaning in Spanish.
Finally... it's odd that all the towns in England are named after streets in suburban Houston.

My first job was at this steak house in my town of 4000 people. And some nights we thought it was Crapi.

Three more for the The List at Sippican Cottage:

Who wouldn't want to live at The Haven at Ridgecrest Vista?

Did you really post this at 4:07 A.M, or is your web server on the opposite side of the globe?

Living here in Texas you forgot the word Ranch