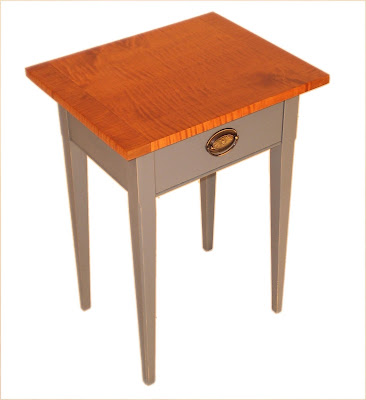 I delivered furniture to far-off locations the other day.

There's a lot to keep straight in your mind. Program your GPS for the stops, phone, camera, receipts for the items, folders with the contact numbers for the customers, arranging the items so they don't shift in the truck when you people drive like you do. I had a bucket filled with a limited amount of tools in the back to effect small repairs. More about that later.

The items themselves were a success. People who purchase the stuff over the Intertunnel seemed to have steeled themselves to be slightly disappointed by the things they buy. I confound them by sending or showing up with furniture that's better than what they expected. I apologize if I'm ruining the Intertunnel for everyone else.

I drove from before 5:00 AM 'til 9:00 at night. I'd still be driving if I didn't have the GPS device. Washington should abandon all future ratcheting up of CAFE standards for cars and just give a Nuvi to everybody and cut gas consumption by 5%, easy. I was lost more than 5% of the time before. Your directions always stink.

So you return home, kinda tired, and try to remember everything when your mind is fried. You pick up all the stuff you have and bring it in the house. But you're bound to forget something.

I forgot the bucket of tools. When I started working the next day, I turned to the spot where the glue bottle was, and it wasn't. "Light dawns over Marble Head," we used to call that. You go outside to get it.

Forgot it was the coldest November in memory, too.

So I'm faced with the horns of a dilemma. Horn One: You're not supposed to waste things. Two: What if it froze?

I checked the weather on the Internet. I honestly don't understand why anyone would watch a lunatic waving his arms at a green screen talking about someone else's weather. But then again, he's on a broadcast that has brittle-looking clothes horses reading a bad newspaper slowly. Kinda a matched set. You must think you're going to live to be a thousand if you've got time to watch a news broadcast. It was below freezing, barely, the night before.

I'm an intelligent person, I guess. I know things. There were many considerations fighting for primacy.
I could go on. You can find all sorts of facets to any problem right out of your head, and go looking for more on the library shelf if you'd like. You can find accomplices on the Intertunnel for any behavior or mindset, no matter how manifestly crappy it is, or find detractors of the most strident kind for even the most benignant behaviors. You can think about things forever.

You're not supposed to have abstract standards of right and wrong any more. The Ten Commandments have been whittled down to the Five or Six Sotto Voce Suggestions If They're Not Inconvenient And Someone's Looking. You'll find PETA protester heinie on display in public more often than the hoary stone tablets now.

It's considered irrational to follow any rules with any gusto. But I consider you irrational if you think you can understand everything with your own unaided intellect. The truly rational pick salubrious abstract standards to follow. "Rational" people think they understand everything and then spend their lives seeing great conspiracies and UFOs and Thetans everywhere.

I used to be an executive. You are required to take decisions. "Take" is the correct word, not "make," because it was implicit by your position that if it got as far up the food chain as you, you'd decide. Your first duty, however, was to never take decisions others should make. Bad managers make decisions about things they shouldn't even take. People often mistake bad managers for good managers because they have huge piles of folders piled all over their offices. Must be working hard. They're afraid to do their own job so they do other people's jobs instead.

Many people likewise think you'd be an automaton if you have abstract standards of behavior. Very wrong. Adults always have competing ideas available to them. Nothing much is simple. Your job is to sort through those competing ideas and get to the point where you can apply your standards. It's Sophie's Choice all day long in the real world where your decisions have consequences. If you live in the world of ideas alone, you imagine it's Sophie's Choice over where to eat lunch today.

You can torture any idiotic thing into a cogent idea, and fool yourself into thinking you're swell for doing so if you're shameless enough. Lawyers get pilloried for that, but that's their job. You ordered them to be shameless on your behalf, and bought the neckbrace they suggested. You took the decision.

I didn't waste one moment of my time worrying about what to do about the glue, unless you call this essay "worrying." I dumped it out immediately because you do not risk launching problems into the future for the unsuspecting for immediate gratification.
Posted by SippicanCottage at 7:15 AM

I know this wasn't really about glue, but I want to write about glue anyway.

22 years ago I had a summer job as a courier, shuttling papers and boxes all over northern Indiana. The biggest orders I delivered were glue. Glue used to make Hummers, as a matter of fact. Frozen glue.

Glue-order bill of lading in hand I'd take one of the company vans to a place called Artificial Ice. They'd have as many 80-pound buckets of the stuff as would fit into my van ready for me.

Because this was a glue that was supposed to be frozen, and given that it was usually in the 90s and the van was not air conditioned, I felt urgency in hauling butt with it across town to the Hummer plant.

Then, one day, a young girl stepped out in the middle of a block in front of my van as I hauled butt. I slammed on the brakes, but with 1,000 pounds of glue back there, the brakes were almost utterly useless.

Almost. The van slowed just enough that all those buckets suddenly slid forward. I felt them hit my seat hard as I watched them pop the vacant passenger's seat off its bolts.

I don't know what happened to the girl. She just disappeared. I hope to heck that she saw me barreling down on her and leapt back onto the curb and ran away.

But after that, I didn't much care whether the glue thawed even in the slightest as I drove it, and future orders, at a snail's pace across town. Figured it served the Hummer people right for using a courier who didn't have a freezer truck.

I manage a lot of people, doing a lot of diverse things. A long time ago, I learned the two-step secret to management: (1) hire good people, (2) get out of their way.
There's likely a third step, now that I think about it: (3) defend your good people when bad managers in other departments object to the good work your people are doing.

Just curious; is the freezing point of glue the same as water?

My guess is that because of its chemical makeup it would freeze at either a higher or lower point, which, if such point were known, would have rendered at least half of the arguments for or against its use moot.

Tying into the more esoteric side of the piece, having all of the facts can save some serious worry

You hand deliver your furniture? Holey moley, I'm never going to get that stool, am I?

Eric- I only deliver big things within reasonable driving distance. Which order is yours? The red one? It's already gone to UPS.