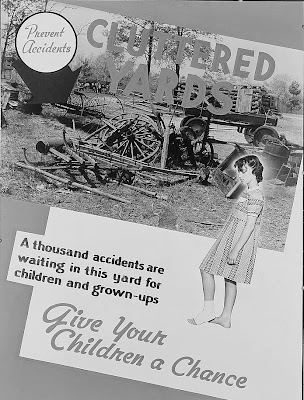 Let me tell you about safety.

As you move up the intellectual food chain, and your experience with the world inhabited by those faced with real, daunting challenges is practically non-existent, your attenuated worldview becomes almost worthless to people who are faced with real danger.

If you are entirely insulated from the consequences of your actions, it would be decent to recuse yourself from offering advice to others, no less so than a man who stands to profit from the outcome. When a man is facing a spinning blade, the cardinal sin is to distract him. Yelling: "Look out!" is akin to shoving him into the blade. The time to identify danger is before, not after. It is predictability and stability and a certain kind of respect that is helpful. Nothing else.

Let me tell you about the blade. You think you can handle it because you fancy yourself intelligent. You're wrong. Because the danger it presents, the real danger, is hidden from you.

I watch people who have no business offering advice to anyone telling amateurs and professionals alike how to do what they're trying to do. I see the safety fetishist's clown shoes -- safety glasses worn to hang a picture -- and the matching squeak-nose of warnings over the toxicity of stuff you could eat, never mind touch, juxtaposed with behavior that reminds me of sheep sniffing around the shambles.

You have to avoid putting yourself in the position where your hand will be drawn into the blade and there's nothing you can do to stop it. There was no danger, really; you were maimed without danger announcing itself first. It was there all along in a way you'll never "get" until it's too late.

The wood lays there on the table. Perhaps it's some mundane species. Straight, plain grain. Maybe it's exotic or unusual. You like the look and feel of it. The smell of it. It gives you a little thrill to think what could be made from it. It's full of a kind of promise of a fantastic future.

But it grew from a little sapling. Buffeted by winds, warped and enfeebled by its greedy reaching to get up to the sun before the others that would wither in the shadow of its canopy, there are stresses built up in the wood. Maybe the tree grew straight up, but the ground where it was born and raised was tilted, and the constant stress was locked in the grain. Maybe the sawyer saw that it was growing at a crazy angle, and put it on the logging truck anyway, out in the landscape where no one would know that no straight timber could ever come out of it. He'd have his money and someone else closer to the blade would find out what was in there the hard way.

Besides the stresses in the wood, there is a phenomenon associated with how it is seasoned. Most wood must be seasoned out in the air -- or in an oven to do it quicker -- to allow it to become useful by acclimating it to its future use. Leaving the lumber out to dry is time consuming and has its risk: bugs and weather and fires and so forth. But there is a real danger in drying out the lumber too quickly in a kiln, too. It's referred to as case hardening. Sounds like metallurgy, but it's not. It means when you try to pass the blade through the baulk of wood, the tensions locked into the wood are released --or better put: are revealed-- by its travel through the blade. The outside of the wood seems OK. But the inside is different.

You are holding on to that piece of wood, if you trust yourself not to put your hand too near, and trust others never to fool you, or be fools themselves. You've been told that others have made you safe, and so you trust it a bit more than you should, maybe. On the table saw, the case hardened wood might pinch the saw kerf closed, and it will grab the back of the spinning blade and be hurled at you. Or conversely, perhaps you will hang on to it tightly enough, and it will buck and rocket away in some unexpected direction, and draw your hand into the abyss.
Posted by SippicanCottage at 11:36 AM

Narcosis of the tool.

Your yurt is almost ready. I'm finished pouring the concrete, and the steel was delivered today.

I'm not sure why you fancy a yurt though, I always figured you for a guy that liked big hogans. Or winnebagos.

Well, it was not really a yurt for me. I thought it would make you and your family more comfortable. I'll still let you folks into the house to use the kitchen as long as you promise to be quiet and clean up after yourselves.

Oh, yes, you can come to the Boxing Day part too.

A parable of Biblical proportions foretelling the wages of Obamania. I am in awe of your insight and writerly skills. A darned good cabinetmaker too.

Boy did this post make me squirmy, imagining a stressed-out piece of wood taking its cruel life out on my poor hand.

Even Jesus broke down his parables for the hard of learning.

It is a tribute to the ambiguity of your post that Sissy took it as a warning about Obama while I thought the description of case hardened lumber was about McCain.

I take you as a man who knows the value of the secret ballot so I will not press for clarification.

I really enjoy your blog.

So, how many stitches did you need? And how many fingers do you have left?

In the worst case, you can command your computer by voice and be a full-time blogger, should you need to give up furniture-making.

And my first thought was of Sarah Palin. IMO, this essay nicely complements Victor Davis Hanson's thoughts on What Really is Wisdom.

A finely hewn parable that leaves each reader with a message appropriate to their circumstances.

You thoughtfully left out any mention of the sawdust that makes you break out in a rash or poisons you in a more subtle fashion.

And then, someone invents something...

Blades for you is fumes for the hubster. Although he and the blade became acquainted, and he needed at least 25 stitches in his arm. Nope, for the painterman, it's the kilz that kills.

Someone mentioned Obama, another mentioned McCain and Palin.

Isn't that mandatory on the internet for people of opposing views? Did I miss it? Is it on another thread?

I don't think you noobs know how this is supposed to work and quite frankly, I won't be happy 'til someone compares me to Hitler.

You, sir, are WORSE than Hitler.

Hitler was, at least, of woman born. You, Sir, are but a fascist planarian.

My faith in the tubes is restored.

I respected the spinning blade as a young man. It was clearly dangerous and someone could get hurt if not careful. Someone. Not me.

After the piece of oak was torn out of my hands, flew across the room, and through the hollow core door, I learned true respect.

What, can't we just get a political Saw Stop to protect us from ourselves?

Complacency kills. I have the scars on my hand from it. I was cutting a log with a bow saw at the Youth Camp when a kid distracted me. The blade went back and forth across my hand when I turned my head.

This summer while with the USCGAUX we were returning to Station Belle Isle and I was rigging a fender when it fell overboard. It dragged me down the boat before I listened and let go of the rope. Thankfully I had enough sense not to wrap the rope around my hand or I might have lost it or gone overboard.

Rabindrnath Tagore--
A mind all logic is like a knife all blade. It makes the hand bleed that uses it.

Nice parable. Might not the point be that _anyone_ could be dangerous, not just our favorite fool?

When you handle the master carpenter's tools,
chances are that you'll cut your hand.