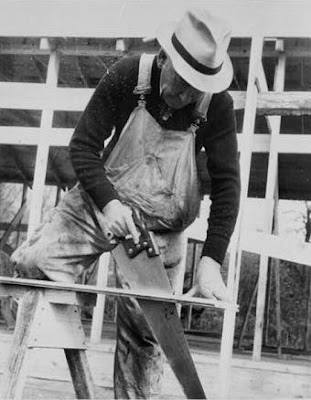 I need to be a little bit tedious here for a moment.

No, really; more than usual. It's because you have to grasp the enormity of this foolishness first. So here goes:

I've worked every kind of construction there is. Commercial construction, residential construction. I've painted the inside of a doghouse, and I've built football stadiums. Rough arts? Check. I've painted murals and wallpapered, too, so it's not just the barbarian arts I'm talking about. I've worked alongside many a homeowner, and at their direction in their occupied homes, as well as out in the field where no end user comes.

I've worked on single family homes a lot. Duplexes? Sure. Multi-family? Check. Condos? Absolutely. Big ol' apartment buildings? Of course. Call them what you like --whip out your PUD. I've already seen it.

I've cleared the land. Dug the hole. Stacked the blocks. Poured the chowder. I've stuck a spud into the steel. Welded? Name your metal. Hell, I've paved the street. Put in the sewer and the drainage.

I've screamed into the phone and the ear and the air alike. Worked alone. Directed hundreds.

I've drawn the plans. Applied for the permits. Put in Environmental Remediation. Sat in interminable meeting for the privilege of being yelled at before being denied and approved alike.

Railroad, Colonial, Adam, Georgian, Second Empire, Stick, Eastlake, Colonial Revival, Tudor, Queen Anne, Ranch, Prairie... this is getting tedious. If I can think of a kind of house I've had nothing to do with I'll mention it. Ummm......

People? Black, white, brown -- all the hues of the rainbow and the UN combined. Disfigured or whole, ancient or young, from every continent. Well, maybe not Antarctica. I've worked with every race, color, and creed. Gay, straight, and just plain strange. Men, women, boys, girls. Disabled people I couldn't keep up with, and able-bodied lazy people. Everybody.

I've worked for customers so imperious that they wouldn't allow us to drink from their garden hose while we were working. Outside. In August. In Massachusetts. Some people, conversely, would set a place for us at their table if we were in their house at dinnertime.

I've seen most all the Do It Yourself kinds of shows now. And I can tell you, without fear of contradiction, that in the hundreds of thousands of hours I've worked, and during the gazillion man-hours of other people's work I have observed, not one, single, solitary human being in the real construction world has every given any other person a "high-five" before, during, or after the job. It has literally never happened in my presence.

I don't know what you people are watching, but it ain't work.
Posted by SippicanCottage at 9:21 AM

Hey, you forgot Craftsman (my personal favorite, but then I'm a know-nothing Midwesterner :o).

I am reminded of the quintessential dry-witted English climber, Bill Tilman, when describing summiting Nanda Devi - "I believe we so far forgot ourselves as to shake hands on it."

The source of all extra-galactic nonsense on DIY TV shows.... the hot sucking black hole?

A brief nod of the head over a very strong cup of tea is just about possible after a job well done...maybe.

I was wondering what you would charge to travel to my state and evaluate an old home that needs to be jacked up and have a whole new engine put in it. Then it needs some body work.

My wife and I watched too much Monster House. Now whenever we finish a task in our (endless) fixer-upper, we can't help but shout "DONE!".

Back in the day we didn't do high fives. Nobody was tall enough.

I think you should go to Ruth Anne's and give her an estimate, and then high five her, on video, and post it on this blog. Because you haven't done it before, and you need to collect that chit as well!

So, not even when you and your friend Mark got the newel post bolted on, then?

Why, oh why, don't you live in Louisiana so I could hire you to come fix my house and repair the damage caused by the tree that landed on it and replace the sills which have been half-eaten by termites because I was too slothful and too much of a brand-new homeowner to remember to hire a termite protection service after I bought the place?

"I believe we so far forgot ourselves as to shake hands on it."

Gotta love the British. They'd go up to a raging mob of Zulus and say: "Now see here, fellows, this won't do at all. Please desist with this hurlyburly at once and disperse, or I shall get cross."

Gerard- Norm never high fives anyone, so he's all right with me.

Ruth Anne- I'm busy running my furniture business into the ground right now. Desolating the East Coast in its entirety is on my To-Do list for later.

Pat- I've encountered lots of termites here in New England. "Ham and Egg" carpenters used to make an entire living out of replacing porches here, over and over, before the dawn of pressure treated wood. But it's nothing compared to Louisiana. They eat the wood while you're nailing it where you are.

I can get behind that. As for the Brits and the handshake, I'm pretty sure you've read Manchester's recounting of Captain Packenham rowing to shore to stop a massacre of Armenians, dressed to the nines, surrounded by a mob stroking their bloody knives, he stroked his beard and told his interpreter: "Let us begin. Tell these ugly bastards that I am not going to tolerate any more of their bestial habits."

Back in the day, when I worked as a machinist, we would 'High-Five' on some occasions when a progect went particularly well.

Such as when a extremely hard production set-up ran perfectly the first time.

Totally spontaneous, and usually between folks who were freinds to start with.

But to 'High-Five' because we had completed a common task? Not likely; we were prfessionals.

I saw the ever-emaciating Kelly Ripa high-five a dog in her fancy schmancy robokitchen, after she kicked a falling fully frosted and decorated cupcake over her head. If only I had those kinds of appliances, I could do that. Probably.