I'll Take The End In The Middle 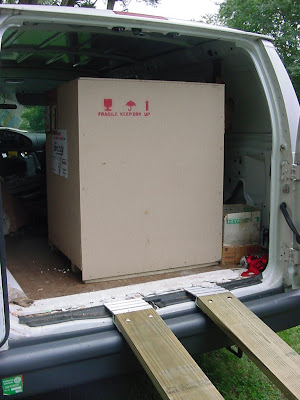 To recap, I have a 350 Pound Doorstop In My Basement, and I'm damn near out of business until I replace it. Do you know how to move heavy things? I see all sorts of educated people that can't fathom how people built the pyramids. They'll believe aliens did it, but not regular people. When you become far removed from everyday things, you'll believe anything but the truth. Construction workers don't watch Mythbusters.

If I told you you had to move that 439 pound box down a flight of stairs, could you do it? Here's what's at your disposal: A thirteen year old boy, his mom, and whatever you have laying around. Easy. By the way; you're in a hurry, because the item is made from cast iron, and it's going to rain. And you can't drop it -- it's precision machinery.

At the risk of sounding like Steve Martin or Charlie Rangel telling you the way to be a millionaire and not pay taxes is to "get a million dollars and then don't pay your taxes," I'm going to just wave my hand and tell you you've got to accept the shipment five miles away because your driveway is too long and skinny for the truck. Then you get the box into the back of your van using only a ramp.

Look, you're going to have to understand the simple machines and be able to predict how much of a boost each can give your available manpower. For the benefit of people with advanced degrees that train you to be able to type into a little phone with your thumbs and not much else, the simple machines are:
Some machines are instantly recognizable as what they are. Others need a little contemplation to recognize. A saw is basically a wedge, for instance. So is a nail.

The very first thing, and most important, is making up your mind to do it. I'm serious. You need to determine if it's possible, and then commit yourself to doing it. Otherwise you're going to succumb to the spectre of one idea after another to quit and get more help and more equipment forevermore.

Everyone wants a wheel, right away. It's the last thing you want, in many cases. The wheel and axle part of our story was the semi truck that delivered it. Gravity and weight will get someone hurt, especially if it's skating all over the place on wheels. We walked the box up the ramp. On wheels, we could never have pushed it up. 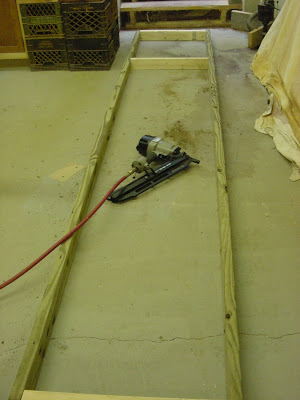 We're going to keep the item from sliding down the sled with a strongback. Putting structural members perpedicular to one another increases their resultant capabilities. 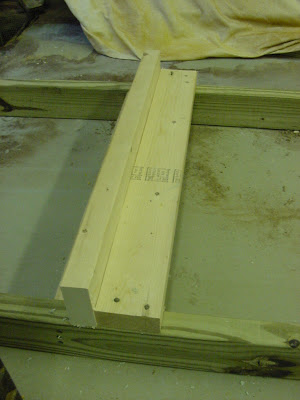 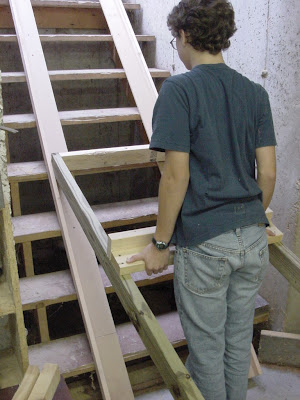 We'll capture the sled on an inclined plane, and use friction to keep it from ending up in China, and me, flat, in geostationary orbit above China. Remember, wheels are bad. 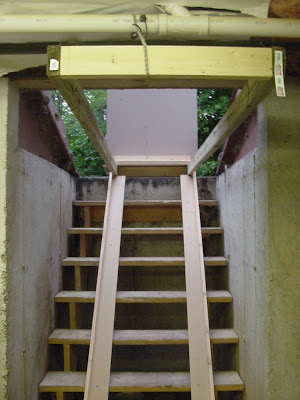 We're going to need a platform at the top to sit the box on. Let's make it from... heh... IKEA furniture. 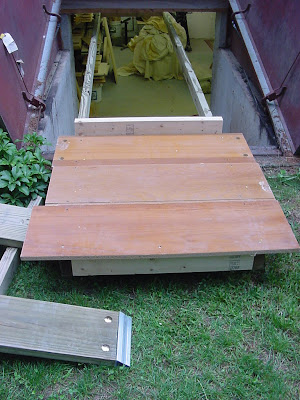 Somebody gave me a knock-down shelf 25 years ago. This is all it's good for in the long run. Buy real furniture, people! I use pneumatic nails to nail it to the frame. 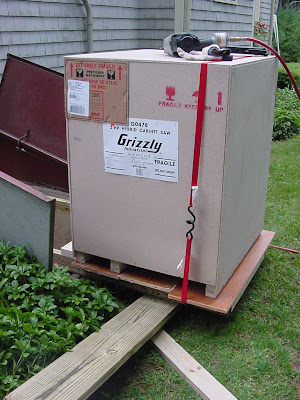 So we walked it down the ramp from the truck and put it right on the sled. We needed to avoid it tipping over and crushing me, standing at the bottom of the ramp, so I nailed the pallet to the sled with as many three inch framing nails as I could fit. The strap was gravy.

I could easily lift the box by pulling down on the bottom of the lever arm we'd made. There was less than three feet under the box, and I had over nine feet of lever. But there would be a moment when the sled would be tipped downhill, but not fully in contact with the whole ramp. It might start moving pretty quick -- too fast. Fast is always bad. So we put self-adhesive abrasive tape on the ramp to increase the friction.

There's a lot of figuring and checking. My helpers can't be hurt, as they're at the top of this rollercoaster looking down, but I imagine that watching the thing crush me and being sent to the workhouse for the rest of their miserable lives would be less fun than shoe-shopping and playing X-Box, so I was determined not to let the thing land on me. I'm considerate like that.

But it started to rain, less than thirty seconds after I was dumb enough to say: "Thank God it hasn't rained." Time to act.

I tipped that thing down, and the sled hung up perfectly on the ramp. The boy ran around to the bottom with me, and we inched it down by wiggling it a bit. The angle of the sled gets less acute as the lever end slides across the floor, and so the force trying to make it a runaway train abates pretty quick. Et voila!; it has arrived: 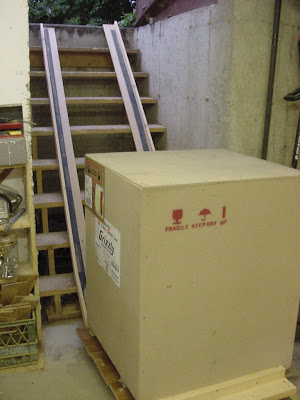 And then the setup faeries came while we ate cupcakes and then slumbered, and they put the thing together from the jumble of gun-greased cast iron and bolts that was in the crate. Or I put it together. It was one or the other; I can't recall now.

And now, we're back in business. 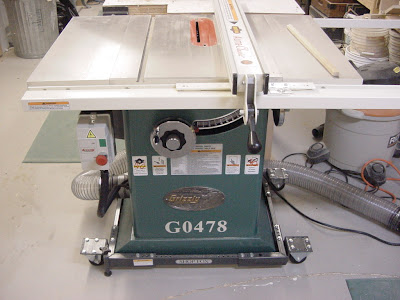 Posted by SippicanCottage at 7:49 AM

This brought back some memories... my dad's a cabinetmaker, and when my brother and I were kids we helped him move all manner of equipment (and lumber) into his basement shop.

I doff my cap to you!...smart indeed.

Seems to me that the smart play and the easier and safer play would just be to build a new shop at ground level.

Fabulous. Congrats on being back in business. Sorry for your nonfunctioning-saw misfortune that brought us all this sterling lesson in physics.

This is why people quit before they start - they think they are getting a thing to do a job, and are too discouraged when they realize they have to do a job to get the thing.

Wife: What are you reading?
Self: Sippican.
Wife: What about?
Self: A table saw.
Wife: YOU'RE reading about a table saw? When did you get interested in table saws?
Self: When I read a great blog post about one. Like now. And the photos are great.

I love the seeming irony of a 439-pound table saw marked "fragile" on its side. You'd better believe it is.

Real irony is getting all set up and finding out that somebody didn't believe the labeling.

By the way, I put my two cents solution on the thread that was linked at the top of "I'll Take The End In The Middle".

That'll show me for not reading instructions.

You can quote me on this- 'Life is Physics'.

Have a word with my dad sometime, will you? The man is brilliant, a law professor, an internationally known expert in his field. But when it comes to practical stuff like this, he believes in doing things the really, really hard way.

The most we ever use when moving heavy things (like pianos) is a ramp. Beyond that, his answer to everything is to get more of us kids involved. He would have just had himself and the 4 boys on the steps, below the heavy box, slowly walking it down.

Oh, and he always chooses to do the outside manual labor (re-shingling the back house/home office, putting up the fence posts, etc.) at about 1pm in July or August.

Mileage certainly varies. MY table saw was only about 300 pounds, and I only had to go UP about 4 feet, but with some sharp turns. I opened up the box and moved it piece by piece...and a dolly with wheels was just the ticket for that 200-lb top. But there's no way I'd dolly something that big down 9 feet of stairs. Love the Ikea sled; I might have roped the crate to the van and just let 'er slide...

Hi everyone. Thanks for reading and commenting and linking.

Jimgrey: The term "cabinetmaker" is actually the correct word for what I do. It's the traditional name for a furniture maker.

Gerard- I used to make a sort of joke when people would want to start building structures before all the permits and site work was in place:

"Maybe we can build the thing now and slip the foundation under it later."

I stopped making the joke when I started getting "Terrific!" as an answer.

I'm making a table for Anwyn so if she tells me to, I'm erasing anybody else's comments.

gyoung- I'm always fascinated with dull things. Chisels, mostly. Glad you were too.

Tmjutah- You're better educated than me. Doesn't seem to have hurt you none.

Dr.Kill - Guinness has also introduced chemistry into the equation.

Hi Pat- If I had four helpers I would have done it just like your dad, I'm afraid. You're going to have to give him a hard time on your own, I have no standing in his court.

Hi Mike- You'll have to take it as a given I couldn't have done it in a more sensible fashion. The ground slopes away precipitously at the top of the stairs, and the van can't go there.

It's easier to get a table saw down the stairs with manpower alone than to get the van out of a swamp. Don't ask how I know this.

Quite the project. Actually got the reference to Christmas Story in your answers. Makes up for missing the "glass eye" the other day.

Tuck adored your tools post. Tell me, sir, what do you think of Ron Hazelton's House Calls? http://www.ronhazelton.com/

Hi Sissy- I don't know who Ron Hazelton is, even after I went to your link.

I approve of everyone I've never heard of.

In a previous life, I taught 11 yr olds about simple machines. We also studied Egypt in our classroom, and I typically tied the two curricula together at some point. Still, the kids were skeptical that ancient ("primitive" in their minds) people could build the pyramids with levers and ramps. Maybe it was due partly to the fact that they were from predominately upper middle class homes, where an average kid never gets the chance to witness his/her father and mother solving a problem like this.

NIce, but now, we need to see how you got the doorstop out

Travis- Maybe it's just me, but going up the stairs is much easier. I could probably do it with just a hand truck and the my teenage son.