(I Continue To) Disregard The Man Behind The Curtain 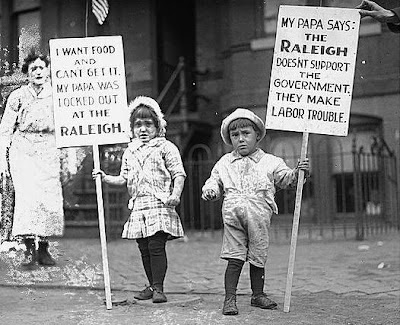 I am not wealthy. I was not born wealthy, and will likely not die wealthy. I have worked at hard, physical labor for a great portion of my life. My parents and grandparents almost all worked at least for a portion of their lives in those mills you see in grainy photos, where an untimely lapse in concentration could cost you a finger, or worse. Before them, it was all Europe and lord only knows how bad it was to send us all here.

While it's true that I've been treated pretty badly by many employers -- and imagined I was being treated badly by some employers who weren't treating me very badly at all -- I have also been threatened with the destruction of the only valuable thing I owned at the time -- my car--and serious bodily harm if that didn't convince me never again to exceed the quota of work deemed appropriate by my "brothers" in the union. In a parking lot at midnight. I know what I did, but I'm not sayin'. Tell me; what would you do?

When I worked for others, I've negotiated such things as trash hauling contracts in New York supplied by perfect gentlemen who are very much in a union. Conversely, I've been shown a chrome plated .45 as a means of collecting Accounts Payable by a decidedly non-union fellow. Life is not as simple as they portray it in the movies. In the movies, any evil fellow in a suit always has a picture of a Republican president prominently displayed in their office, usually where any normal person has a picture of their family. In my life, the only really crooked executives I ever met all had pictures of JFK in their offices. I don't know what any of that represents, really.

I have always had a predilection for reading, especially history, so I know all about the Ludlow Massacre and I know what a Wobbly is. I've read Ida Tarbell articles from McClure's. I've got a picture of Mother Jones with Calvin Coolidge around here somewhere. I know what a Pinkerton man was for. I've read Howard Zinn's People's History of the United States and John D. Rockefeller's biography alike. When I read Studs Terkel's Working, I didn't run around yelling "Something must be done!" ; I played a sort of game to compare how many of my own jobs had been worse. I'm old enough to recall a rather thrilling union tableau in a shipyard in Gdansk. And I know all about Sacco and Vanzetti.

That's a long list of things to explain one thing: People enter into all sorts of organized things-- corporations and unions; rock bands and time-share condo deals; bowling leagues and the Cosa Nostra. I wish you all well. But me? I never wanted to be equivalent of the child in that picture, who doesn't even know what the sign says; and as long as there's breath in my body I'll never again put myself in the thrall of that hand you see, if you look closely, reaching in from the top right corner of the picture.

Happy Labor Day everybody.
Posted by SippicanCottage at 1:07 PM

For me, "Labor Day" has an entirely different significance as of 5 years ago.

It's about time I thanked you for the hours of pleasure and what I've learned at your site over what? the past year or two. Your dry wit and writing style is magnetic. I first came by way of a link from Gerard's site where he often links to your blog.

Well said on unions, though I know some of them have had their time and place. I believe the teachers' unions are the scourge of education and the U.S.A.

Hi Ruth- Been present at a couple labor days myself. Know what you mean.

JW, thank you for your praise and for reading and commenting.