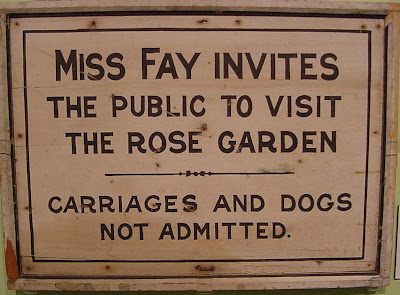 We visited the Sandwich Heritage Museum on Sunday. It's a great place to do nothing.

There's no fun there. We had fun, but that's a different matter. We were not subjected to the trials of fun. We brought some along with us and had it. That's different. We very much subscribe to Yogi Berra's dictum that places can be so crowded that no one goes there anymore.

They had an exhibit of pirate stuff. It was there last year too. It's about as populated with things to look at as the Arctic Circle is with four-star restaurants. Like I said though, they just have to make an effort, and give us a little stuff to work with. My little boy dressed himself in a frock coat and a tricorne hat they had in a little chest and put himself in the jail there, and generally enjoyed himself. Little boys used to be captivated by pirates, and Indians, and gold rush adventurers, and Jules Verne explorations. That urge to live outside the mundane world seems to be generally supplanted by clubbing a hooker to get your money back, using your right thumb on the X button, now. The pirates were better, I think.

As I said before, I like the Steampunk kids for their flights of fancy and their visual panache. Real elegance. But Steampunk isn't old school enough for me; let's have Old School Steampunk. How about the lock on the inside of the pirate chest. Yeah, that's what I'm talking about: 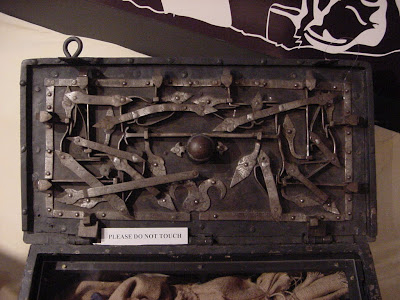 Click to embiggen the photo. My audience knows me, so they can sleep easy tonight knowing that, of course, I touched it.
Posted by SippicanCottage at 12:14 PM