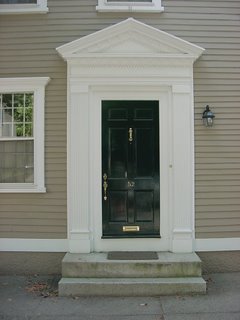 Oh yeah, that's what I'm talkin' about. Gimme some of that American architecture.

Benefit Street in Providence, Rhode Island has a wide selection. Now, by wide selection I don't mean there are split level ranches and Bauhaus stucco boxes mixed in. I'm referring to a range of architecture from Georgian, to Adam, to Colonial Revival, with a smattering of Second Empire and other assorted Frenchified sort of things. Oh yeah, some Greek Revival. Somebody's always doing CPR on Greek architecture. There's some Italianate whatsis here and there. They dabble a bit in the Victorian, but just. For the most part, it's that chaste and elegant American extrapolation on the English tradition.

There's really only subtle changes between Georgian, Adam, and Colonial Revival period things. The first picture is an excellent example of the Georgian. A simple two story box, two rooms deep, with doors and windows strictly symetrically arranged. The style books can't make up their minds if the style goes from 1700-1780, or all the way to 1830. If it doesn't go to 1830, this house isn't one. But that's a classic Georgian door. Or Adam. You decide. 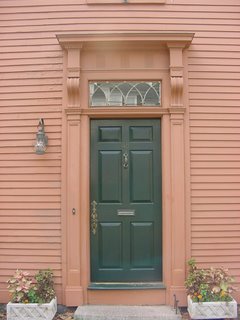 I thought the owner might come out and shoo me away from this bronzey-rusty-peachy wonder if I kept staring at it. I'm going to call this Adam. That's a bracketed console entry, which was very popular in later Victorian styles, but this is like their daddy. The leaded glass is really delicately done, and there were little bees or pineapples or flowers or something decorating the interstices and all the proportions are elegant and the black door looks marvelous with that not quite definable siding color and --Oh Lord I've been leering at this guy's front door like a lunatic for five minutes by the clock, and if he doesn't call the cops soon I'll be lucky. Take a picture it'll last longer, as they say; so I did.

Adams houses aren't much different from Georgian Houses; just a little more delicate in execution, and more likely to improvise a little with the massing of projecting wings and porches and ells and so forth. They have Palladian windows a lot. In New England, during the 1980s, there was a short fad for a kind of Jetsons Adam Revival house, with a projecting center gable, a garage attached but set back a foot from the front facade, a palladian window over the front door in the second story -- usually part of a two story foyer -- and a symmetrical facade. The house might have rambling ells behind. That house passed the true test of architecture -- the trick or treater knew exactly which door to go to.

That plan was superior to every damn thing that has come after it. 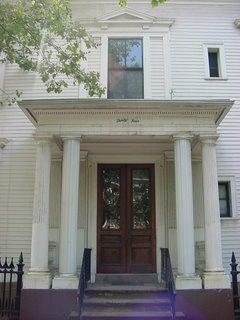 Here's our last one for today. Early Classical Revival, I think. It's got the big entry porch they loved, a much more imposing building and facade. That style overlaps with Greek Revival, and this has all the Greek goodies on it. It's a great big place, and it's a throwback to thirty years ago on Benefit Street. It's a rooming house. Most of Benefit Street used to be inexpensive apartments for students going to the nearby Rhode Island School of Design, or Brown. There seems to be a fetish for vicious dogs again, at least judging by the three pit bulls we saw being walked, so perhaps the neighborhood is that most common of urban situations: You probably don't need a pistol, but sharp teeth might come in handy in a pinch.

There's a lot of teeth on the mouldings too. I guess it's always been that kind of neighborhood.
Posted by SippicanCottage at 8:37 AM

Email ThisBlogThis!Share to TwitterShare to FacebookShare to Pinterest
Labels: architecture

Thank you for this post. I just discovered your blog. Boy do I miss the East Coast.

Hi Jennifer- Thanks for reading and commenting.

A Longbaugh Bench will help all your ills, infirmities, deformities, proclivities, activities -- and you can sit on it, too.

Just checked in after a long time.

We painted our house based on the colors of the house in the first photo. My wife actually knocked on the door and asked and the woman still had the paint sample cards.

She said that we were not the first people to ask.

Hi Henry- Thanks for reading and commenting.

That's a great story. Lends a touch of verisimilitude to the whole proceedin's around here.

The color scheme there is very subtle and elegant. Seems easy -- gray, black, white! Not so.

Fie on me. I rode down Benefit street last night on way home from work and the house I mentioned is about 2 blocks further down the street. Very similar colors -- grey, black, cream -- on a very similar house, but the frieze is rectangular.

I hereby offer the official Sippican Cottage forgiveness and benediction to Henry for lapsing into a Benefit Street reverie.