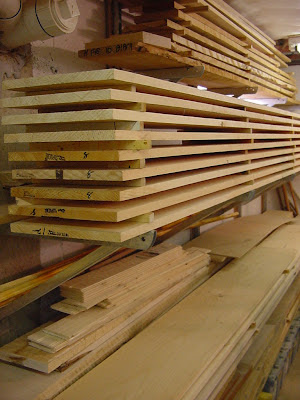 That's pinus strobus. Eastern White Pine. I know it about as well as anybody, I guess.

I use a great deal of it making furniture. But I was introduced to it a long time before that in the housing industry. If you look at a piece of framing lumber, you'll likely see a grade stamp on it that says SPF with some numbers. No, your lumber isn't worried about sunburn. SPF stand for Spruce, Pine, Fir -- all evergreen trees with needles that have about the same strength and so are lumped together for grading purposes. Pine is immensely strong for its light weight and makes good framing lumber.

I know 1x12 number 2 common pine as well as anyone. (Some call that "C Select" grade. Lumber has a lot of inside jargon) My entire house, except the tile in the kitchen and bath, is floored with it, screwed and pegged. Number 2 is an appearance grade that means it has a few sound knots. 1x12 is a nominal size. It means the board was 1" thick and 12" wide before it was dried (it shrinks) and dressed (the cutters take their vigorish) A 1x12 is actually 3/4" thick by 11-1/4" wide. A "board foot" of this lumber is not a foot square. It is 12" long by 11-1/4 wide by 3/4" thick. People often buy board feet and forget nominal sizes, plus good old-fashioned waste. If you buy clear pine with no knots, it costs more than expensive hardwoods in many cases. I made my entire kitchen cabinetry out of the flooring stock by cutting out the clear sections of knotty boards first. I used the knotty sections for secondary things and kindling.

My property is covered with pines, many over 75 feet tall. Hundreds of them. They grow straight up like weeds. When I wanted to clear an acre of them to build the house, the sawyer didn't charge me anything. He took the nice, straight boles of the trees he felled to the sawmill and sold them to cover the costs of clearing the lot.

I've learned that pine is a slab of gasoline. Almost literally.

What I mean by that is, the cost of pine is almost 100% the cost of the energy involved in getting it to where you're going to use it in the form you want it. The wood is almost worthless just standing there with birds chirping in it. Here's the energy list:

I have to get in a truck to pick it up, too. They're between eight and sixteen feet long. Not great in your Subaru sticking out the window.

Read any news outlet. They'll tell you that since all that energy is required to get splinters into my finger, it's Armageddon and we're all gonna die in an inflationary tsunami.

It's true I didn't enjoy paying $4.07 per gallon to go to the lumber yard. But I need pine to make furniture. And I paid 34% less for it this week than I did exactly one year ago. Same quality. Same vendor. Same everything.

By any measure of what goes into the cost of a board foot of pine, I should have paid a lot more now. But like most things economic, you can't figure out anything by reading the papers. A lot of it is borderline counterintuitive, or obscure, anyway. The demand for lumber to construct housing is down, so the price is not goosed by any boom. Everybody sharpens their pencil a bit. But there are other factors in play.

Any news article you see that outlines inflationary pressures based solely on the price of raw commodities, without discussing productivity or other concurrent economies of cost, is written by, and aimed towards, a fool.

Just like the lumberyard, and the yards that supply them, I've had all sorts of pressures put on me that might make what I produce more expensive. But at the same time, I've had all sorts of labor and material saving devices come into the picture. It's only inflationary if the productivity gains don't outstrip the rise in cost of materials and labor.

The shorter version of all that is, in general, Something Else Happens. Sometimes good, sometimes bad, but not linear. There is no more complex system than the modern economy.

Counterintuitively but wisely, the lumberyard is expanding their facility a great deal right now. When there was a boom, they used their existing location to its max and and made their money. Now it's slack, and they use the pause to get ready for the next rush. Maybe you could learn something from them. You're never going to learn anything worth knowing by watching Katie Couric.
Posted by SippicanCottage at 10:54 AM

You don't, you know, have to always be rubbing it in.

Come on, Gerard, get over it.

You don't think it's worth knowing about Katie-oscopies?

People don't feel smart unless they are crying doom. Naturally, then, if our road trips and plane tickets are getting more expensive, well, we're all gonna burn.

Thanks for keeping me from locking the wife, kid and dogs in the bomb shelter before it really becomes necessary - that is, when the beer prices go up.

I do love a bit of knotty pine!...lumber costs over here rising so if you hear any scouse accents on your lot as tree disapears you know where it went!...my gothic confection almost finished...will post it tomorrow...not up to your standards but its a start.

I have to disagree with you on something. While the the price of #2 wp may be up from a year ago, most of the other commodity lumber (i.e. #2 SPF, OSB, CDX and others) are off substantially from 2 years ago. Some of these decreases are up to 40%. This change in market conditions is purely due to supply and demands factors.

I run a small retail lumber chain in the midwest. While our MBF volumne is close to the same as 24 months ago, revenues are off significantly in those departments.

Hi anon- thanks for reading and commenting.

I guess you missed this part, though:

"I paid 34% less for it this week than I did exactly one year ago. Same quality. Same vendor. Same everything."

I write in a loopy style, so it's not entirely your fault.

Your "about me" got me to laugh.
Thank you.

Like wood and furniture, bu am not very 'in to' either.

Lately it has looked to me like a lot of waste wood is being wasted.
The worst of it could be burned for heat or energy. The best couldmake good furniture or art.

Although this is a really interesting post, it's kind of vague on what productivity improvements might have caused a 33% decline in price. Can we expect the same in other areas or is it a one-product fluke?

Hi Richard- Thanks for reading and commenting.

I'm glad you found my about page amusing. It is my sole purpase, here, really.

Almost nothing is wasted here at the cottage. I do not, and never have had, a dumpster for my business. Come to think of it, I never got a dumpster to build the house, either.

Noumenon- Likewise, thanks for reading and commenting.

I did only make the one point -- that economics is not linear, it's a big bag of guts and if you push on one side, it bulges and slouches all over elsewhere. If you push too hard, it can burst, of course. Sooner or later I had to shut up.

I could name a great many things that I can get that are cheaper, better, and just plain available, that recently, weren't. The pine boards were just an example. But their price fall despite their intimate ties with the cost of fuel was counterintuitive and hinted at an overarching theme.

I once did list ten things that are better than they used to be:

It's weird, I read several pages of your archives and I would have guessed from that that you were not the type to answer commenters. Well, thanks.

Noumenon- You're welcome. Thanks for reading and commenting.

Most websites that deal in current events try to elicit controversy and get large strings of comments going. I'm not averse to that, but it is not my focus. I write essays, mostly.

I'm grateful when people leave me messages about stuff here. There is a substantial coterie of people who leave messages regularly, and they've given me terrific ideas for things to write about, and also ideas for my furniture business.

Your earlier comment got me thinking about all the various goods that I use in my business that are cheaper than when I began 4-5 years ago. They are generally in the form of superior goods for other goods that have become pricey, so "inflation" doesn't correlate directly.

An example is because petroleum has become expensive, wood stain and coatings that have "paint thinner" as a base have increased in price greatly. In the newspaper, that would be shown as pure inflationary pressure on me to raise prices. But I've changed over to all aniline dye, for instance, which is a superior product, and a fraction of the price of petroleum-based item it replaced. Something else happened there, too.

I thought about writing a list of such things, spurred by your brief comment. I'll get around to it.