[Editor's Note: Sure, we take requests. Ruth Anne, The Maternal Optimist, is calling out for an encore, or perhaps a do-over of a venerable essay that caught her fancy. We live to serve, Madam. We feel we must comply, because if you know the lovely Ruth Anne, you know she'll remember it forever and make cutting puns about it in perpetuity if we don't.]

{Author's Note: There is no editor, but I suspect Ruth Anne might be real.} 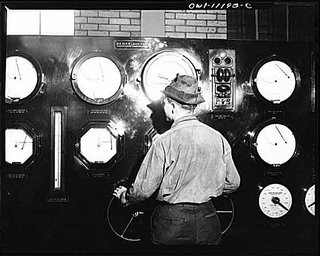 OK yesterday we defamed the elderly. It don't matter; they've barely learned to use the telephone, and I doubt any of them are ever going to be reading teh intarnets, no matter how big they make teh intarnet pipes. So let's get back to where we started: If you're not a stick-in-the-mud, technology can improve your life immensely.

As I am the foremost authority on myself, I can assure you in my case that's absolutely true. That might seem odd at first blush.

I make reproduction antique furniture. Talk about a stick in the mud. Well, go to IKEA if you want to buy Jetsons furniture made out of wooden shredded wheat and formaldehyde glue, swathed in woodgrained wrapping paper. I'm not interested. And I'm not interested because "modern" furniture is an old idea. It's just as dated as any Shaker table is. It's the method of making it and selling it that's new, and I put IKEA in the shade on that score.
So I'm a thoroughly modern mill- man, trust me. So what exactly makes my day so modern, in the true sense of the word, and how is it different than it was just twenty-five years ago? I'm glad you asked:

There you have it. It's always "the future" right now, and it's so bright... well, I told that joke already. I must be getting old, I'm repeating myself.
Posted by SippicanCottage at 8:35 AM

Finally made it to an IKEA. I was on holiday in Dallas. Yes, Dallas. Scandinavians have a certain eye for things that left me squinting. I came away with the notion that, aside from the hand crafting vs. made-by-assembly-line-in-the-dark-of-the-northern-winter and the mindset that a furniture box shouldn't fit under the seat in the van, the most critical difference between this place and your shop was all the attractive women in the aisles.

Of course, for half of this theory, I'm working on pure assumption.

But, but, but ... America is an awful, eeeevil place, full of slack-jawed troglodytes. Our lives are getting worse all the time! Average people can't get ahead! You're either lying or you cheated someone to get where you are! I heard it on YouTube, so it must be true!

That's true, but it's a curse, really.

Hey Steve- I've seen all the attractive women currently in my shop naked.

Pastor J- You humorously say "slack-jawed troglodytes" like that's a bad thing. I suppose we could live in a sophisticated country with four hundred kinds of cheese but only one political party. I'll pass.

As good a summary as I've read as to how good we have it today...somebody should tell the politicians as apparently we are all in dire need of saving...me... I'm a happy chappy too.

You could go on and on with that list, but it would cost billions of pixels....

Hi Tully- Yes, and I threw my back out lugging the hogshead of pixels up the stairs to write this list, so I'm done.

I agree. The future rules, and these are all the good reason why. I take advantage of the future's awesomeness on a daily basis, just never was able to put into words why it was so great until now.

I've been saying this stuff for years. It sucks to live today for some reasons, except for the fact that we're livin' in the future, man.

Cell phones have changed the entire planet in the last decade. In my profession (police), we've seen it change the way we receive and answer calls, and the way that we respond to them when we get there.

Computers-- especially laptops-- have changed the world. Hell, I'm at home, and I'm not even using my desktop. Why should I? the little notebook does it as well, and I can pack it with. In my patrol car, I can bring up a suspect's mug shot, criminal history, and what he paid for his house, without even invoking privelidges given by the badge-- I'm doing that on the public side, through Internet Explorer.

My tired old Honda that's 11 years old and has almost 200k miles on it still gets 32 mpg, when I drive it like a bat out of hell.

Telephone service is cheaper than it's ever been in the history of ever. I can talk all day long to my friends in other states on the reasonable flat fee that I pay once a month.