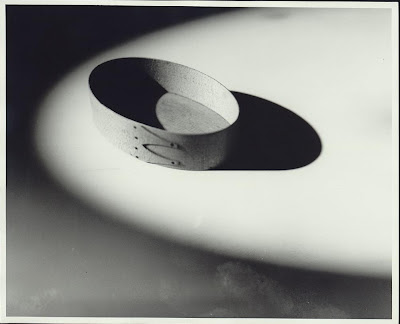 The most expensive Shaker handiwork I've ever seen is one of these boxes. I look at the auction records for Shaker items from time to time, and I see their magnificent sewing tables and desks going for real money, as collecting the items has gone to its logical conclusion and only museums and the hardcore speculator can afford most of the genuine big articles.

I found an example of two small boxes like the one pictured, with their lids, that were auctioned in 2003. They are a very bright yellow. Shaker items are often assumed to be from a sort of rich but drab palette of colors, but most of that is because of the passage of time. They were routinely painted screaming yellow and lipstick red and a really jazzy salmon color, among others, but they fade to more sedate hues.

There's a handsome Shaker cupboard in the same auction report. Five drawers below with two big doors above. It looks like it's made of cherry. It's really big, really fine, in excellent shape as far as you can tell from the picture, and went for $12,500. Why so much for the little box?

Because it's perfect, and sublime. When you can make an art photograph out of your object, you're generally on to something.

I have lots of books about Shakers. In one, there's a fellow named Delmer. Can't recall his last name. He's in Maine, and he's making those boxes about a hundred years ago. He's standing in front of a pile of them that goes up to the ceiling behind him. He's in a barn, not a mobile home, so "up to the ceiling" means something.

The boxes were utilitarian. They were for a humdrum purpose. And Delmer made them over and over, and tried to make every one perfect. He hurled thousands of them into the maw of the world, which used them and wasted them or lost them or whatever happened to them all in the intervening years. And there were hundreds of Delmers.

Now they are precious. They are rare because there were so many and they were so cheap there was no reason to save them. And they are fantastically prized for their rarity. But there's something more; lots of ugly things are rare.

If you woke Delmer up from his eternal slumber, and lied to him and told him they were all lost, and so no one could testify to the effort and care and art and mystery he put into them, I bet he wouldn't care a whit. I doubt he would have changed a thing. He tried to make a perfect thing in his human and imperfect way, and gave it over to a very imperfect world.

I'd like to tell him just how close he got to the sun. But I am not that nice a person, really. I'd have an ulterior motive to give him his posthumous attaboy. I'd ask him what the warmth of that faraway orb felt like on his face; because how many of us will ever know the sensation?
Posted by SippicanCottage at 9:55 AM

Any chance I can purchase a Sippican original of the Delmar box?

Here's a Shaker quote. Maybe it will explain.

If it is not useful or necessary, free yourself from imagining that you need to make it.

If it is useful and necessary, free yourself from imagining that you need to enhance it by adding what is not an integral part of its usefulness or necessity.

And finally: If it is both useful and necessary and you can recognize and eliminate what is not essential, then go ahead and make it as beautifully as you can.