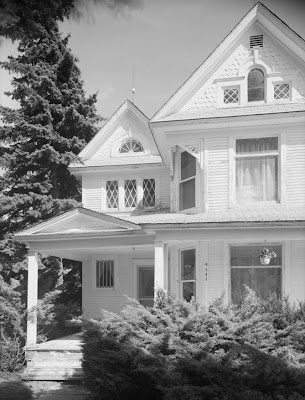 I am a lover of houses.

To be a lover of houses, you really have to be a lover of people. Houses used to be inextricably linked to the people that inhabited them. That's slipping a bit. More than a bit. A lot. Damn it, there's been a wholesale destruction of the concept.

I've made all sorts of things, many house-like. I make furniture now. So I still have something to do with houses. I've recently gotten a look at all the shows on cable TV that feature the purchase, renovation, decoration, or sale of a house as a sort of American Idol bloodsport, and I don't like what I see. Here's why:

I used to renovate houses fairly often, sometimes really ancient ones. I always was attentive for what was considered part of the essential fabric of the house, and noted how often I was charged with ripping out and replacing things that had been added or changed by the occupants, based on fads that come and go.

All the shows I saw based the rehabilitation of homes-- some were new houses, too-- on what I consider very ephemeral fashion. But a house is not garment. You are making long term decisions with short term design elements. The house itself is a two or three hundred year decision, or could be, if you remember to put batteries in your smoke alarms.

I started early in life in this business, so I've already seen all the mistakes that popular renovation culture makes. The cutting edge stuff you're picking out at Home Depot? I've already ripped it out of houses --twice-- in the last twenty-five years, while the homeowner said: "What were those people thinking?"

As far as the renovation TV zeitgeist, the only overarching theme I see is that even people of modest means are now taking advantage of the services of buyer agents, decorators, and landscape and house designers that may or may not be contractors. Only the very wealthy used to do that. I like to see people of moderate means establishing households and being happy. Call me a soft touch, if you will, but I'm hardly a snob about such matters.

The customers' attitude is generally a kind of profound confusion. They have no frame of reference about the beauty, utility, or value of one thing, never mind all the things together. So they invite people in to spend their money and tell them what to like. And with few exceptions, they're inviting the wrong people.

I've seen many wonderful and terrible things. I've watched women in open-toed shoes performing demolition. I've seen the Village People do plumbing. I've seen an Amazon woman whip out house redesigns, some quite fetching, like she's winding a watch. I've seen ex-football players make a kind of frat-house tree fort for a homeowner to hide from his wife in. Norm Abram is still rattling around on the periphery. And after taking it all in, I only have one thing to say:

If I see one more room with everything powder blue and cocoa brown, glass tile, and industrial knobs on everything, I'm going to climb right through the screen and kill someone.
Posted by SippicanCottage at 8:57 AM

What a beautiful Victorian. I am renovating an 1895 Victorian.

Love the blog, by the way.

You are so right, Sipp. That silvery blue/cocoa brown color combo is so destined for the trash heap where 1970s avocado green/harvest yellow and sickly 1980s mauve/french blue reside. Yet "they" keep pushing it on those HGTV design shows.
Another thing about that channel that bugs me is the time line and complete cost of every renovation is often never disclosed.
Deb in Madison

Its never disclosed because most people wouldn't even start if they new what the cost was.

I and my wife recently bought a bungalow, and the previous owners had essentially set off semigloss white paint bombs in each room. Every surface except the floor.

Now every room is a different color.