An Invitation Into A Disorderly Mind 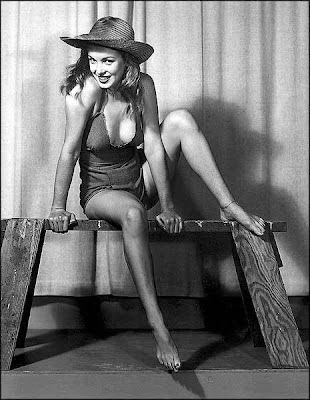 I hate the word. It's inelegant. The Internet is disorderly and inelegant, so it fits, but I more or less have never gotten the urge to be "a blogger." This might seem counterintuitive to those who read the URL for this page and see dot blogspot right in my name. Google named it, I didn't. Google couldn't even name themselves properly. Who should expect them to name others wisely? I tire of gibberish in great things.

Bloggers are other people. I am not casting aspersions. I'm just telling ya, is all. I confused a few people yesterday, because I put the raw feed from my head on the page. If you look at the picture I supplied, and read what I wrote, it's entirely coherent. But old friend AJ Lynch's observation:


Say that again but slower this time.

are entirely fair. They are cruising the Internet looking for people expressing themselves forthrightly. There's nothing more forthright than the Internet. I can't ever recall being told to Die In A Fire in real life, after all.

So I'm a little too obscurantist for the Intertunnel. I can't help it. I write essays here. It's different. I apologize unreservedly, in advance, for everything I'm ever going to say in the future.

Those were my wedding vows, by the way.

Perhaps I owe it to my audience to explain the idiosyncratic workings of my mind. Here goes.

See the picture at the top of the page? I saw it on our beloved Intertunnel yesterday. What's the first thing that comes into your mind when you see it? Wanna know what mine is? This: 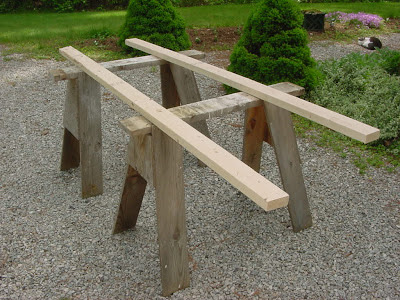 Marilyn Monroe is sitting on a very old school sawhorse, one that I've made myself. I have never encountered another person still making them this way. I learned it from men, all dead now, for whom Marilyn Monroe was more than a Elton John retreaded song reference. My modern carpenter friends would never make sawhorses this way, as it is complicated and labor intensive compared to their designs. But I've used mine for 25 years and kept them outside for much of it. They don't even wiggle in the joints yet. I do, and I generally am kept indoors at night. There is no shame in the carpentry trade in buying pre-made sawhorses now, either, although the people I first learned carpentry from would have never spoken to you for the rest of your life if you brought one to work.

Oh, and Marilyn Monroe? She'd be camped out on my doorstep waiting for me to come home, if she was still alive. Girls like that are a dime a dozen. I'd have to send my wife out to shoo her away. But man, look at those legs.

They're 1x6 utility grade pine. Set the framing square at 24" on the blade and 4" on the tongue to get the angle right.


Visit Sippican Cottage Furniture
Posted by SippicanCottage at 10:28 AM

I had two thoughs. One on seeing the picture--hey, she's sitting on a sawhorse.

Then I read halfway down the post--what? that's Marilyn Monroe? and had to look again.

It doesn't look like her--brown long straightish hair, legs a lot longer than I thought hers were, body a lot leaner. That's the best-looking picture I've ever seen of her. She looks like a normal, healthy girl rather than a person who has established she has one purpose in life: sex appeal. Alas.

Tony Daniel said...
This comment has been removed by the author.
11:32 AM

My granddad had those sawhorses, too -- but he never used them after August 4, 1962. After all these years, a family mystery solved. Thanks!

I don't know what's going on with your blog ... when I access it whether through IE or Firefox, the browser starts contacting cdn.gigya.com and starts writing insane amounts of data to my pagefile, until it freezes my browser then brings my whole system to a crawl. Anyone have an idea on this? It's been happening for the past few weeks. Can't read Sip because of it, and that makes me cranky.
-Bob

I use a masons bank for all thw various jobs i do...kind of a sawhorse on steroids.

Now that I've been able to block cdn.gigya.com and farm.sproutbuilder.com, I can read the site in peace again. Had to modify the file c:\windows\system32\drivers\etc\hosts with a text editor, which basically tells your PC to look to itself for those sites rather than their real ip addresses. Whew, glad that's outta the way.

My first thought looking at that pic (OK, my second or third thought) was actually "hey, those look like our host's sawhorses that he showed us a while back." I'm still surprised to see that the girl perched atop them is Norma, though.
-Bob

Funny ... I noticed the hat. It's a cute hat on her, and completes the look.

I didn't know it was Marilyn Monroe, either, but I agree with Anwyn that she looks healthy and normal. It's a shame she got caught up in a game nobody can win.

Bob- I'd be interested to know if anyone else had the same trouble. The Sproutbuilder and associated Gigya addresses are associated with the animated ad I run at the top of the page. I am (was) a beta tester of the widget maker, but no one had mentioned a problem with displaying it before. I use both Firefox and IE and have not had a problem.

Thud: I have not heard the term "mason's bank" before. There is a thing we used to use called stand-offs. Imagine one set of legs on that sawhorse chopped off. You'd lean the stub against the house, and the angle of the legs would make any weight on the horse push the stand-off against the wall. Surprisingly stable.

A "Mason's plank" is a common term to me. It's a very rough plank about a half inch thicker than a carpenter's plank, sized for the additional weight of masonry or bricks placed on it when the hod carrier shows up. I once had some fellows working on a house for me. I told them to use 2x10s I had laying around for planks. I left and came back and they told me they found a mason's plank instead. They said it seemed kind of heavy, but it worked real good.

I fully expect you to whistle at my funeral and for Mrs. Cottage to wear that red dress.

Wonderful pic that I too page upped to verify it was Norma Jean. Right about the saw horses too, though I confess I've added two sets of composite horses to help save space when stored. My wood ones were confiscated to support a table top we used at honey harvest time last summer. They're still out there...

Sippican..masons once worked on a bank of earth that took the stone to work height.Afterwards they used a very sturdy version of a saw horse.I use it for all jobs...crude joinery included...my chippie likes it...very steady.

I was trying to say what you wrote was so "deep" (for lack of a better term), that I needed to read it again but slower.

No criticism meant to you buddy! I am gonna get you a book deal before I die.

..brilliant sentiments..thats very engaging work your doing..I will follow up with you from now on..thank you sir.. and greetings from 04345.

Hi,
I really like your sawhorses shown on your April 17, 2008 post. They just
look right. I understand the instructions on how to get the angle correct
for the cut on the legs - could you be so kind as to furnish more dimensional
and instructional info on your sawhorses? Things like:

1) The beam on the sawhorses looks to be a 2x6? How long do you like the beam
to be?

2) The edges of the beam do not look to be chamfered to receive the legs, is
that right?

3) How long do you like the legs to be? Do you chamfer the ends of the legs
so that the bottom of the legs will sit flush on a flat floor?

4) The gussets are just regular 1/2 in. plywood? They do not look to be a
particular length as they are longer on one set of the sawhorses shown
than the other, since that is not really critical, right?

5) How far from the end of the beam do you attach the legs on the beam?

6) Looking straight down the beam from the end of the sawhorse, what do you
like that angle to be? In other words, what do you like the angle on the
gussets to be?

7) Do you like to attach with nails or screws?

Hi Eugene- Thanks for reading and leaving a comment. Instead of answering your questions here in the comments section, I'll write a new blogpost that gives all the dimensions. Stay tuned.

Thanks so much for your reply. I will be looking out for the new post.

Hello SippicanCottage,
Hope this note finds you doing well in the new year. Do you still plan to write a new blogpost detailing the construction of the sawhorses?
I enjoy reading your blog, but I was really looking forward to that post!