(I'm Not Going To) The Boatyard 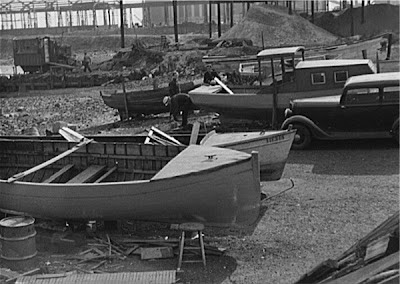 [Editor's note: The author is bumming me out. He wants me to re-run this from years past, and I want to go to the boatyard, too, but I'm too busy.]
{Author's Note: There is no editor. The boat is very real, and very dusty now.}
This is the time of year for the boatyard.

I got rid of my sailboat. Gave it away. I didn't use it, and I tired of it calling out to me all the time, reminding me that it was there and I wasn't using it. The reminder came, generally, in the form of a bill of some sort. If it just existed, that would be one thing. But it became a taxi to nowhere, up on blocks, with the meter running. No fun.

Don't get me wrong; it was marvelous to go out on Buzzards Bay in the high summer and trail your hand in the hissing foam along the gunwhale and feel the sun and the breeze on your face. But it was an awfully long run for such a short slide. I spent as much time painting it as sailing it the year before I finally pulled the plug on it.

I made another boat. It was my original idea, to make a boat with my own hands and get out on the water in that. It would take all the dilettante out of it for me. However modest it might be, no one makes sport of a boat you made yourself. People have all sorts of ideas about other people's boats at the harbor, most pretty catty, but there's a sort of respect that comes with the fabrication of the thing.

I made the little boat all from mahogany and mahogany plywood. I finished it about three years ago or so. It was in the way, half built, for more than half a decade before that. I finished it in a flurry in three weeks so I could get it out of the way. I never launched it.

I stuck it in an unused bay in a friendly garage, and only the dust motes drift by it. It calls to me, as the other one always did, but in a different way. There is no meter. There is no urgency. There is no feeling of foolishness of pouring cash into a hole in the ocean.

Whenever you're ready, it says.
Posted by SippicanCottage at 10:11 AM