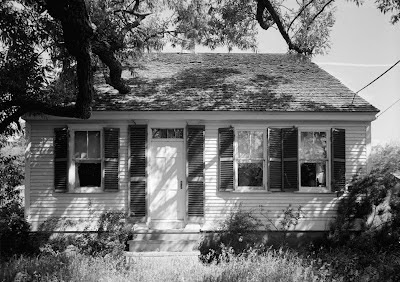 I remember her laughter drifting out from the kitchen window. It was always muffled even before the trip through the house distilled it. Grandma would never let it all out. She laughed a lot, and smiled most of the rest of the time, but never with abandon. She'd glow with it like a lamp in a house at night.

Grandpa never spoke. I never met a man more like the Sphinx. He had that smile that wasn't. Halfway between smiling and plain looking at you. He could have been a fool, I guess; his silence could have covered up for a million inane things he might have said, after all. I doubt it.

The grass was always hay when I came. Each blade a tree in a miniature forest. I'd get out the rusty push mower and meditate over the swish swish swish of the blades. The daylilies would sway like languorous hula dancers in the sea breeze and you'd dance the rigid right-angle minuet of the landscaper beside them. After you cut the grass it looked like a bald man's crew cut. It's all sand anyway.

Grandma would bring you out a glass of lemonade. I remember that, though it was long ago. Her eyes were weary and her hand trembled so one time it would be a sort of liquid lemon praline, and the next a jolt of lemon battery acid. But it was ice and lemons mashed by her hand and gobs of sugar from the same chipped bowl your mother dipped her spoon in to dust her cereal, back when U-Boats cruised off the coast there. It was a taste of forever, unchanging. I'll never forget it.

All gone now, of course, but for the totem of the house. The time has long since gone by that's needed to take the sting of it being empty from everyone. We all owned it, so no one did, and we'd go and shear the lawn once in a while and chase out a raccoon or a squirrel that managed to find a way in from time to time. We'd swim in the tepid ocean and drink at the little shack on the access road with the blue-hairs and the fishermen. Maybe an afternoon on the butt sprung couch or a night sleeping on one of the musty mattresses in the cobwebby bedrooms. Then back to the world over the bridges.

"A Three-Quarter Cape," my Grandmother would gently correct you, if you called it a Cape.

Maybe I should open this house again. I'm three-quarters Cape already, too.
Posted by SippicanCottage at 11:00 AM

One of my grandmothers lived in a shotgun house in New Orleans -- armoires instead of closets, a clawfoot bathtub, old furniture. The other lived in Shreveport in a two-bedroom house built by my grandfather and father -- overstuffed furniture, big four-poster bed, upright piano in the living room, pecan tree in the front yard and a sheep in the backyard that I fed old bread to. Those memories are still magic.

I hate/love coming to this site when you show these various houses and buildings...damn!...I can't get enough of them.

Well, Thud, we love and hate having you here, too.