Sometimes (I Re-run Stories About) Peace Activists (That) Have Muskets 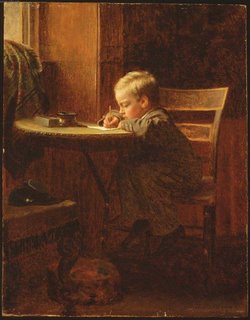 An older brother is sacred thing, my Father told me. Just so. But he don't know the half of it. Father's older brother went west on him, and disappeared. Maybe he's in Californy. He don't know. But he says he cares.

I care about Noah. He's mine. Older brother I mean. Mother says he was born in 1845, in the biggest thunderstorm ever, and Mother knew he'd be taciturn forever, for he didn't say a word that day.

Sometimes I think Mother is pullin' on my leg.

But Noah don't talk much around father. Mother says the oldest is the wisest. Maybe so. I talk all the time she says, even when I'm sleeping, but I wouldn't know. And when I'm gettin' switched for begging boiled sweets at the store, or pokin' at the pigs through the rails, or hidin' in the smokehouse when we play Red Rover, or hidin' checkers from my sister in my cheeks and puttin' 'em back on the board when she aint lookin', Noah just smiles and carries on, quiet like. I think he's always talkin' to himself in his head, so the words don't build up, and cause a jam.

Noah knows I'm little. I don't think Father knows. 'Cause Father tells me to do things, and turns his back to me, and goes back to what he was doing. But Noah turns my head around to the place Father told me to look, when I get distracted, and not with the cuff Father thinks I need. And when I was awful sick, and Father was away to Lafayette, Noah carried me all the way to the doctor's brick house, 'cause the fever made Mother worry so. Noah's always carrying me, it seems. 'Cause he knows I'm little.

Father works too hard. He takes the trees, one by one. There ain't but one gnarly tree left in the barnyard. And all the branches hang too high for me to reach. I ask Father, but he don't seem to listen always, but I never have to ask Noah. He never says a word, neither; he just sees me there, and finds a way to pass by, no matter what, and give me the "ten fingers" to the branch that's lowest.. And he never says nothing, he just does it, and walks on, wordless, and I bet Father don't even know he does it. But I know.

I asked Mother why Father don't always hear me, but Noah hears me before I talk, I think. Don't Father care for me, Mother? She said hush; Father made Noah for you, he loves you so much, to give you the ten fingers without askin'. How Father knew I'd need ten fingers, before I was even born, well, Mother didn't say. I don't dare ask Father. He's a good man, my Father, I guess, but why does he have to take all the climbin' trees?

Noah came to me and said: I have to go now. Just like that.Where do you have to go? To Lafayette?

But you can't go. who'll give me the ten fingers?

There's others, brother, that need my ten fingers now. I'll go and give it to them. And then I'll come home, I promise. Maybe you won't even need the ten fingers then. But I got you this, from the Shakers, to give you ten fingers when I'm gone.

And he gave me my little wooden steps, to reach the branch, and the bed, and the wash bucket.

Father cried when Noah left, already dressed in his blue uniform, to give the southern man ten fingers. I never seen Father cry before. I think it's because he ain't got no brother, to give him the ten fingers.

(Painting by Eastman Johnson 1863. Visit the Museum of Fine Arts in Boston and see it.)
This is a Ten-Finger Stepper
Posted by SippicanCottage at 12:21 PM

I love that story, and I love my Stepper.

I thought you looked taller.

I, too, love the 10 finger stepper, as do my three wee. And, in the shade Portland Straw, it fits with nearly any decor. I've looked around and you won't get a nicer step stool at even twice the price. This thing has been in daily service for two years and it's just as solid as Sippican himself.

This is a terrible business plan. I am only selling furniture to nice people. How many of them can there be?