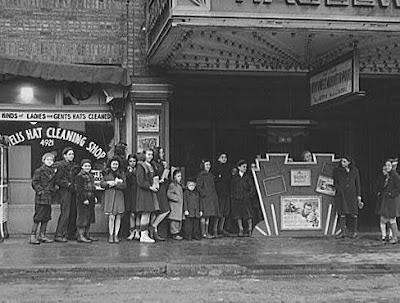 I am not here to pass judgment. I would only like to offer an observation. It's not my fault I notice things.

I interact with many disparate people. There are different sets of them. One group has nothing to do with another. It has been my great pleasure to talk of things here that seem new to many persons because I go places and see stuff they can't, or haven't yet, or whatever. If I am unusual, it is because I am a sort of rope bridge between citadels that would not be joined otherwise. My friend the carpentry framer and my other friend the book editor would not likely interact even if they were neighbors. But perhaps they see something of one another in my virtual living room.

A television is a godsend to a shut-in. Many elderly people are not ambulatory much; weary, sick perhaps, or simply know the joy of "not going." But they can still see the world and everything in it on the television. Media can connect people, including those that couldn't connect any other way. That's interesting to me.

I encounter an enormous and growing number of people who have no frame of reference for the whole world, and everybody and everything in it, except that which they learned from watching, listening to, or reading entertainment. But unlike the elderly I mentioned, they are not using the TV to remind them of a world they have already participated in. They are deriving their reality from the flickering screen. Every single thing they say or do is filtered almost entirely through the lens of movies, teleplays, and magazines --paper or virtual-- things that use reality only as a veneer, if that, and simply to lend verisimilitude to wholly fictitious inventions.

It is now possible to walk up to any stranger on the street, and be as likely to find a person whose views on every subject are shaped entirely by bad song lyrics as any other education. Or their understanding of economics is entirely seen through the prism of Michael Douglas yelling into a satellite phone. Love is one hour fifty-five minutes of a hooker that looks like Audrey Hepburn being wooed by a captain of industry. The only talk they have is small, and consists solely of misremembered quotes from Fletch. Their response to any query about the meaning of their life might elicit not St. Augustine, but Lloyd Dobler:

I have no idea what you've got, but I know I don't want it, is an interesting worldview.

It's very difficult to glean raw information from the media, even --or especially-- from the sector of it that claims they are solely dispensing raw information. They are presenting a kind of entertainment for partisans. That is not information. But then again, information can be dull. Saying outrageous things and calling it a chaste appraisal is more fun, I suspect, especially for the generator, if not as much for the consumer.

There have only been two visions of the United States. Thomas Jefferson and Alexander Hamilton. Alexander Hamilton might be the greatest visionary the world has ever produced. Jefferson's yeoman farmer, bartering hard goods with his hardass neighbors, is dead and buried. We are living in the mercantile division of labor fiat currency go-go world of Al Hamilton. It has brought us untold riches, and an appetite to amuse ourselves was finally joined to the leisure to do it. The pumps at the gas station play music. You must be entertained at all times. If life was harder, we would not be able to afford to act as foolishly and frivolously as we do. But it is madness to wish, as I see so many do, that misery could befall everybody so we'd have to be more circumspect and sober in our behavior. Nothing is stopping you from being sober and industrious. Why are you wishing to be forced to be that way?

The beauty of entertainment is that anything you can imagine can be conjured in front of you. It occurred to me viscerally, in a flash today, that in great measure the audience is all up on the stage and the entertainers are sitting in the seats and telling them what to do, to amuse the entertainers. What is American Idol, if not that? Since the audience is so far removed from the genesis of the prosperity and the leisure they enjoy, they have no frame of reference to reject any bizarre interpretation of reality out of hand. Elvis shot Kennedy after being anally probed in a spaceship! Hey, it could happen. I think I saw it on HBO once.

I see a lot of very insulting and condescending epithets hurled at those who exhibit simple religious piety. It is generally rained down upon the meek believers by persons who cannot bring themselves to forgo anything that might bring them a moment's pleasure or amusement out of hand. Abstract right and wrong as a method to govern your life is assumed to be dead. Even worse than dead; it's not cool.

There was already a time when men lived only in shadows and rumor, angry or frightened by wild tales, goaded by manipulators, envious and suspicious by default of anybody, kin or stranger alike, and were taught only by the ancient version of the movie screen: superstitious stories told around the flickering fire. We lived in a wild and vicious state of nature.

You meet a stranger on the street. It's become more and more common that they learned all they know about economics from Trading Places. Perhaps they learned all they know about love from a depiction of a man drinking himself to death with a hooker in hotel room in a city founded by gangsters. What if they eventually get their only idea of love of their fellow man from Saw II?

When they're carving you up with a rusty chainsaw, will they mention that the Sermon on the Mount is just a superstition, I wonder? And what difference would that make, anyway? The world is full of compelling and competing superstitions. I guess it's just up to us to choose a pleasant one. Or not.

[Up, Up, and Awaydate: In the comments, my friend and fellow Massachusetti Sissy Willis links to her rumination about a facet of this topic. I think she's smarter than me, but I'm too dumb to really know if that's true.]
Posted by SippicanCottage at 12:05 PM

If it wasn't standard audience behavior, I'd give this essay a standing ovation.

Call me standard, then.

We live in a magnificent world in wondrous times. Daunting, frustrating, enticing...

I hope we are up to the challenge. I hope we survive the present, which seems bent on filling both past and future.

Good stuff, this. Add it to your land-use entry of the other day and you've got the start of a primer on exurban existentialism.

Books That Beg to Be Written: Exurban Existentialism

Gerard makes a terrific joke of course, but I thought "exurban existentialist" was very trenchant, there, Steve. I'll add it to my business card right after Ninja and before Yahtzee Coach.

If life was harder, we would not be able to afford to act as foolishly and frivolously as we do. But it is madness to wish, as I see so many do, that misery could befall everybody so we'd have to be more circumspect and sober in our behavior. Nothing is stopping you from being sober and industrious. Why are you wishing to be forced to be that way?

You know, I've had some thing similar to this same thought, but never articulated it the way you just did.

Thank you. I'm going to use that.

I am doing a standing O anyway. Looks like you got some new irregular regulars here. I say welcome to these new members of Sipp's Future Book Club.

The jingle jangle razzle dazzle of Stanley Fish's fatuousness regarding the unpleasantness at Columbia a couple of years back, when the head of the anti-illegal-immigration Minutemen was physically assaulted and shouted down by thuggish members of the audience, comes to mind:

"The question to be asked is not did it further free speech or contribute to a robust democratic culture or provide a genuine educational experience? Rather the questions to be asked are: Did it rock? Was it a blast? Was a good time had by all?"

"Even when you win you lose because there's no learning curve"

As you may know, I don't care WHAT you say about me as long as you say SOMETHING about me.