Happy Halloween, You Bunch Of Freaks 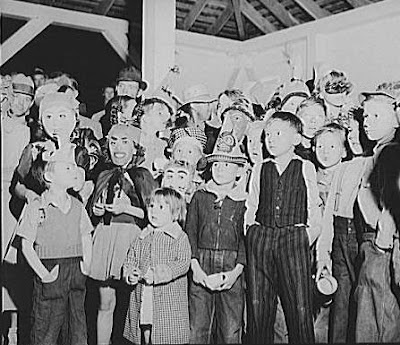 Hallowe'en's a mess. Everybody tells me so.

Read the newspapers. Hallowe'en is a combination salacious bachanaal, devil worship love-in, and workplace sexual harrassment playground-- with the added attractions of being fired, run down by cars, dressing your daughters as Jodie Foster in Taxi Driver, and perhaps getting razor blades or anthrax in your kid's candy. Other than that: Have Fun!

Pope Gregory III moved Festum omnium sanctorum --All Saints Day -- to November first to put a Christian gloss on the thing, but I bet appeasing dead spirits that walk the earth with treats goes back to the times of the caves of Altamira. The actual caves, not the Steely Dan song.

Co-opting an existing tradition for a current generation's amusement. Hmm. Sounds exactly like what every crank, weirdo, jerk, and dogooder busybody is trying to do right now with Hallowe'en. At least the Pope just monkeyed about with the day after Hallowe'en, so his flock could enjoy a pagan festivity without worrying about it much. It's like a Fortune 500 company hiring P Diddy as a spokesman. It's more about image than any change in substance. My apologies for referring to him as "P Diddy." I think he's just "Diddy" now. Or perhaps he's changed it again; it's almost 10:00 am and I haven't checked today.

I don't have much of an opinion about Hallowe'en. Everyone seems to have lost their minds about it. There, that's an opinion.

1. People use the day as an excuse to do vicious things to one another. I don't care for that. And I really don't think you want to be placed in any jail population wearing a costume.

2. Adults participate in it more than children now. That's silly. Adults are supposed to walk behind their children with a flashlight and carry their charges and their loot for the last 7/8 of the trip.

3. People's insane ideas about what other people should eat are intruding on the fun. Hint to homeowners: Children like candy. Children don't like candy designed for diabetics. Trust me on this one.

4. Paganism is the root of Hallowe'en. If you're an actual Pagan, or Druid, or Wiccan, or think you're a witch or warlock, I've got news for you. Hallowe'en ain't your night. It's NOT the one night when everybody sees the essential coolness of your Wal*Mart Vampirella thang; it's the one night of the year that normal people pay enough attention to the imaginary trappings of your foolish worldview to make fun of you. That's it. Just like everybody else on Hallowe'en, you should behave and look differently for a short period. In your case, you should dress normally and act in a dignified and intelligent manner for a little while . You can spend the other 364 days acting like a loon.

5. Hallowe'en considered changing its name to "The College Kids Don't Wear Much, Drink Still Liquor- Keystone- Cough Medicine-Rohypnol Smashes While Re-enacting the Sack of Troy, Amateur Arson/ Rapist/ NASCAR driver/Insane Jehovah's Witness/ Melee Night." It wouldn't fit on the t-shirt, so they left it alone. College kids don't need Hallowe'en. College kids only need the calendar to read "Thursday; PM," for all that. No use eggin' them on.

I'm here to help. Let's solve all our problems with Hallowe'en:

At around dusk, small children dressed in cute and fantastic costumes will visit the doors of their nearby neighbors, who will give them a little Snickers bar for their trouble. Any child old enough to be unaccompanied by an adult is too old to trick-or-treat. The children's parents will stand slightly behind their children and wave to the neighbors and they will exchange pleasantries. The home will have a pumpkin or two on the step, and perhaps the silhouette of a witch on a broom and a black cat, cut from construction paper by a gradeschooler, in the window. These small children will not be frightened by this activity, and startling people for your amusement will get you only a rap on the head from a Maglite flashlight that you will commemorate for several weeks by rubbing the lump it leaves on your addled head. The small children will be home and asleep at the regular hour, more or less.

While they sleep the deep, comforting sleep of the weary and contented child, I will steal their candy.
Posted by SippicanCottage at 9:22 AM

The worst thing is that you can't give kids real treats any more. My husband remembers popcorn balls. I remember real carmel apples. Neighbors gave these things out. Every year, we hear about stuff that supposedly shows up in Halloween candy and turns out to be bogus. All designed to make us hand out prepackaged candy instead of real treats.

Candy covered razor blades. I live for this stuff!

teri- Little Sippican would love one of your candy apples, but he's four and I think you live 2500 miles away and he's only gonna make me walk maybe 500 miles tonight.

Sippican: At that rate, you'll be there by Sunday.

Are ya' ready boots? Start walkin'!

We used to do taffy pulls with the preacher's kids! Now THAT was fun! I miss bobbing for apples, too. And playing blindman's bluff. Sigh. Tonight my irksome middle child dressed up as an Eskimo Skank Ho-bag. Methinks she is too old for this. My eldest went to a party. I hope they don't sacrifice her...she is still a virgin.

We still have one neighbor who still gives out chocolate chip cookies. I'm sorry to say that me and the other walking Dad can't resist asking for our own cookies.
By the way what do you say to a Trick or Treater dressed up a Tupac (the gangster)? He came by our house with a 2 princesses and 1 other thug. At least he didn't have a .45 on him.

Trust me on this one: Diabetics shouldn't eat candy designed for children, but that's my one stab at Paganism these days.

I am pleased to report that I had a lovely old-fashioned Halloween like the one you describe. A friend of mine moved to a new neighborhood this year and was warned to expect a lot of kids on Halloween--like 350 of them. I went over on Wednesday night to join the fun (we get no kids at my house) and it's true, we had that many. They were terrific. Great costumes: Angels with wings, butterflies with wings, a stunning Mozart ("hey, I like your music," I said, and for a moment Mozart looked like he wanted to linger and share some knowledge, but of course he was on a mission). A bust of Caesar was wonderfully creative--face, wreath, and cardboard column all painted white for the marble effect; there was just enough room inside Caesar's column to drop the Snickers into his pillowcase. Two kids in tinfoil getups; "we're flashlights!" they said. Great! Twin Teradactyls [sp?] starting to fade were carried on grownup shoulders, a little less scary with their dinosaur head hoods down. Quite a few Dorothy costumes ("you know how to work those shoes, right?"). Parents lagging behind in the shadows, providing the occasional reminder to say Thank You. But most of the kids didn't need reminding. Most of them were absolutely delightful. So heartening.