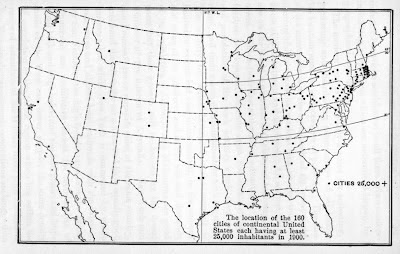 If I changed the text on that map to read: 2005 Schoolyard Shootings With Death Toll Over 10; or perhaps: Cities with at least 400 Starbucks, or maybe 1995 Alien Abduction Sites, you probably wouldn't bat an eye. You'd e-mail it to your friends, or not, and maybe hope the aliens clean the probe after every, well, probing.

The map is from the Library of Congress. While it's true that Congress has no idea what's it's doing, at least when it's not engaged in actual perfidy, the library has always been pretty good. I bet this is legit.

I live out in the sticks, and I bet I can throw rocks and hit more than 25,000 people. That map would look like you shot it 25 times with buckshot if you used the same criteria now. So what's it all mean?

To me, it means that people have lost all perspective. People forget what it was like when Jimmy Carter was president; (shudder) how are they going to have any sort of judgment about the changes wrought over a century? Great big things have been happening. They are not directed, really. No one "decided" how we were going to fill in that map. We all did it on our own without any guidance, thank you. Check that; we did it despite your guidance, you busybody know-nothings. Things are always happening, and on a grand scale. Things that don't seem to be directed by anybody in particular make people nervous now. And one of the funny side effects of people losing their faith in god, or God, or whatever, is that they don't replace the idea that we all bump along in the grand scheme of things as best we can with: the invisible hand of Adam Smith. No, they replace it with: Comrade Stalin will be along with his five year plan soon. People get nervous about "things" happening, and elect persons willing to prey on people's fears of those "things" happening by promising to stop those "things" from happening. Or start them. But they can't just happen.

There are, as usual, numerous politicians claiming that they are willing and capable of directing vast sectors of human existence better than we can all do it ourselves. I ask you: would these new voluntary directors of even the minutiae of our lives be able to identify what's already happened? I doubt it. Let's put this map in front of them, and ask them what it represents. If they know what it is, if they even know what's already happened, then maybe I'll listen to them when they tell me they know what's going to happen, and what we should do about it. I wouldn't hold my breath if I were you.

-Are those are all the places where I've solicited sex in a public bathroom?

-All the places I've got haircuts that cost more than 400 dollars?

-All the places I might have buried Chandra Levy?

-All the places I've solicited campaign contributions from a boy named Hsu?

-All the places I've crashed my car into things while wacked out on Ambien and Chivas?

-All the places I've shot people in the face...
Posted by SippicanCottage at 7:48 AM

I could not believe it at first.

I love it when people do their homework. I cheat off them, generally.

One of the interesting things about that chart to me was how many of the dots were in Massachusetts. The mills were running then.

The population of Boston, and Massachusetts, more or less hasn't changed in 100 years. It's a moribund place we live in, Harry.

My work sometimes involves numerical estimating. I fondly remember Martin Gardner's monthly columns and his advice that the first step in estimating is getting the correct power of 10. If you could figure the right power of 10 for a beginning estimate that constituted "numeracy" in his view.

Example: For the number of mobile phone handsets manufactured worldwide in 1 year the power is 9.

BTW I'm headed to Wrentham Antiques Marketplace soon to see some of your work. They say they have some in stock.

Harry- That's great. They are really nice people over at the Antiques Marketplace.

Ruth Anne- Yeah, that was a yikes. Worse than the war.

Look at Boston from 1960 to 1980. Lost 135,000 population. I used to live there, and go there often during that stretch. I try to describe what a Beirut looking place it was back then, and people think I'm exaggerating. It was pretty bad.

Not quite your "buckshot map", but here's the "nightime map" from census.gov in 4.95MB PDF form (jpg for you slowpokes, here).

Another interesting thing about your older map, the lines of longitude and latitude they highlight. I'm guessing they picked 97° longitude cause it's midway (and only 14 dots fall on the left side of that line), the latitudes are bit more mysterious.

From the modern map it would appear that it's just one continuous metro area from about Richmond, VA to Bangor, ME. There's another near continuous band of communities from Atlanta, GA through to Raleigh, NC.

But as dense as we are, we don't compare to India and China (or even Europe), a PDF of global densities can be found here.

I'll concede that buckshot sounds better, but birdshot would have left more holes.

anonymous- I have never fired a shotgun, so my knowledge of it all is meager. I would still use the buckshot word for the bang in it.

That's not what your comment made me realize. Birdshot and buckshot really should be one word, not two.

I'm going to fix it. Send me a bill for consulting.