The Government Got Big. The People Got Small 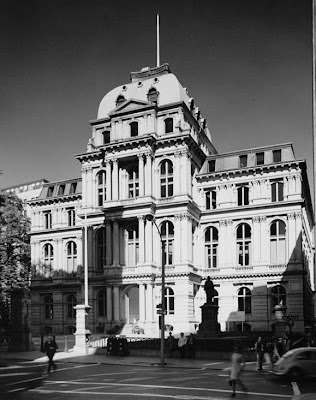 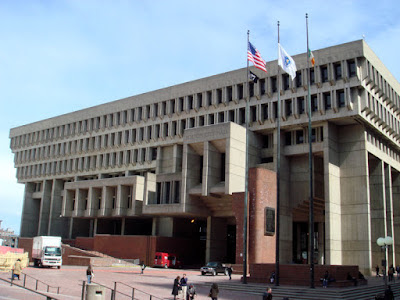 These are the same building. Let me explain.

The first is the old Boston City Hall. It's still standing, on School Street in Boston. It's in a pleasant little courtyard, across from the venerable Parker House Hotel. It doesn't have any civic function any more. It's filled with restaurants and offices now. It's a handsome building.

The second picture is what's called by real locals as the "New City Hall." It's almost forty years old, but Boston is a provincial place. They'll call it that forever. I'm from Boston. Let me assure you all: The New City Hall and environs is the ugliest place in our solar system. They should read Vogon poetry from a balcony there every day, all day.

I've been in the New City Hall. I've talked to lots of people that have been in it, and plenty more that have worked in it. And it's been unanimous. It's the most hateful, anti-human, drafty, cold, forbidding dungeon in the world.

They should demolish it. But that's not enough. They should exhume the corpses of the architects, and the politicians that hired them, and shoot them into the sun. If they're not dead, all the better. They constructed the worst place on earth. Expiation of that kind of guilt requires a substantial gesture. Not the sun though, now that I think of it. It's too warm there. The sun never shines in that building. Pluto.

Let's say you'd never seen that building before. The monstrosity, not the pleasant one. I could tell you it was a prison, and you'd not only believe me, you'd write your congressman to complain about how poorly treated prison inmates must be to be housed in such a place. If I told you secret police in East Germany tortured people in there, what visual clue could you glean from the photo that would give away the misattribution? No one would enter an upside-down abattoir looking place like that unless they were handcuffed and screaming, would they? If it said Arbeit Macht Frei over the door, would it surprise you?

The first one is a Second Empire dustcatcher. In America, they called Second Empire style General Grant style. It's visually very dense and interesting to look at. It's elegant inside too. And the sober, serious nature of the place still reflects a profound respect for civic government. It just doesn't visually scream: Submit or Die... and pay your Water Bill Here like the second one does. 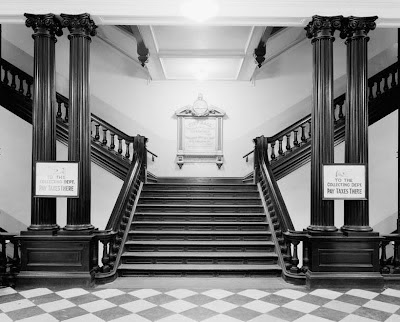 People elsewhere call Boston Beantown. Locals never do. Some call it The Hub. But when this building was built, Boston was called "The Athens of America." Boston's rich tradition of civic virtue, education, culture made it an accurate description. But the basis of all culture and sophistication is an appreciation for mankind.

When you are designing and building a building, the human being is the template. All that stuff applied, and the forms of the spaces themselves, trace their proportions and rhythms and coloring back to the human form, and the world he inhabits. It's the reason why the Parthenon doesn't look goofy to anybody. It's based on all humanity.

What is that miserable pile of brick and brutal concrete in the second picture representing? The worst instincts of men; no less. You are made to submit your humanity at the door -- my mistake, the curb... hell two blocks away this thing sucks the life out of a passerby. At any rate, it's the perfect example of the late sixties intellectual and architectural zeitgeist, that buildings are a machine that answers only to themselves and the crabby fools that design them, and their users are just fodder to be fed into the front door- if you can find it.

The current Mayor of Boston might be the least attractive example of a public official I can imagine. If he didn't exude a sort of lumpen aura of venality and corruption, like a dim plumber who cheats on his bills, he'd have no interesting attributes at all. Even he's got enough sense to want to tear the place down and start over. But the same sort of insane fans of Brutalist anti-human architecture that built the thing are trying to declare the building a Boston Landmark, so no one will ever be able to touch it. They understand that it would be a repudiation of their worldview, not just the building itself, and they're going to be wrong, wrong, wrong right to the grave. They'll fight tooth and nail for the Brezhnevian thing to the bitter end.

At first I thought the "new" city hall looked Stalinesque, until I realized that a lot of Stalin's buildings are prettier.

Some of the city halls here in the South look like your old city hall. They should probably call the General Grant style the "General Sherman" style because of all the city halls that had to be rebuilt after the latter's March to the Sea.

I guess I'd rather have my spirit ennobled by architecture than brutalized, but that's just me.

Actually it's not just me. My nine-year-old son said, "The first one looks good. That one doesn't look good."

Even more deserving of replacement is the plaza in front of the new city hall. It's lifeless, treeless, windswept, icy in winter, and scorching in summer. It takes an anti-miracle of urban planning to create such a total void in the midst of the rich sidewalk life of downtown Boston.

It's ironic to think that both the city hall and the plaza were the result of an architectural competition. I wonder what the LOSING entries were like.

When I was 15, I worked at the buck a book in government center. My daily view was of course, the wedding cake.

What a perfect example of concrete communism. Perfectly horrid.

WOrse of course is that it sits right in the middle of some truly great architecture, like a giant concrete wart.

Corbusiesque nightmare that it is, it doesn't surprise me that it intimidates and sucks the life out of all that enter....Does anyone wonder why Les Jeunes Africains are ever ready to burn down their neighborhoods in France?

lmagine the same type of brutal Stalin's buildings filled up with thousand petty buraucrats with similar characteristics working there - they always, always, say No to every thing. lt doesnt matter what you say - the response is NO, until later after years of wasted lives, you pay your 'dues'. This is a real picture of how lran is run!! The irony is that the buraucrates think you have enjoyed their company all the time while they were wasting your life in the corridors!!

The new city hall- almost 30 years out of Boston and I still think of it as that.

In Ulaan Bataar, Mongolia, there are a lot of windy Stalinist paradeplazas dominated by buildings just like it. Couldn't remember what they reminded me of until I saw your photo.