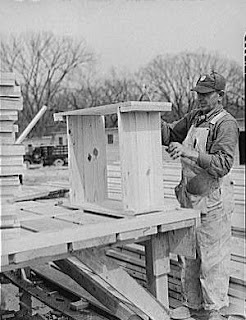 Our internet friend Patrick down south in the Red Stick State is making a table. He's asked a question, and it was bound to bring on the logorrhea, mostly off-topic. Here's the question:

Now, since you've offered advice upon the seeking of it, how does one make all the legs on a little table come out the same size? I clamped mine together in sawing and making the dadoes and everything so they'd all be the same height and have the shelves at the same spot and everything, and one leg still came out shorter than the rest (I suspect warpage). Do I just keep sanding the others until they're evened out?

This is interesting as all get-out. We have encountered the confounding and somewhat counterintuitive "Accumulated Error."

There is a long and boring explanation of accumulated error regarding mathematics, science, and especially lately climate prediction. We need not trouble ourselves with that here, as we begin with our eyes glazed over from hunching over the tablesaw. No need to keep basting them.

What we are referring to is well known to the man who must measure over and over again. If I measure a foot with a ruler, and make a mark, and then measure again from that mark, and then again for a while, certain dreadful things can begin to happen. First, after about 36 tries, I'll be outside, and it's snowing, and I don't want to go there. But more to the point, if I am making an error -- say, the ruler is wrong --and then continue remaking that error, while using my last erroneous point to start making my next mistake, things can get really bad really quick. I said "can" get bad, but that's just an expression. They "do" get bad, and you get fired or not paid, and so forth. And your table lists to port. What's happening?

Eisenhower might be the most able executive we ever had as chief magistrate. He said: "A plan is nothing; planning is everything." He understood accumulated error. You have to take into account the vagaries of constant changes.

Now, back to our table. It wobbles. Patrick is downcast. We must help.

First, Patrick, you're very cheeky to just make four legs and expect them to turn out alright. A professional wouldn't figure he's have any sort of success doing that, and make fourteen or so, hoping to get three good ones and one that don't look that bad in firelight. The firelight is generally cast from a lovely blaze in your winter fireplace, made from the other ten legs. But you are brave, and do the crossword in pen, and we must help you.

They are all a little different. You tried, but wood is not steel, and you are not a machinist. Your pencil marks, the angle of your head when you read the markings on tools and measuring instruments; hell, the humidity changed and that wood decided it wanted to be closer to the size it was when the birds were chirping in it last week. And you are accumulating errors, and you don't know how many ways that material and those tools and your own efforts will betray you yet. Wood only really expands or contracts across its grain, so table legs and so forth don't really get longer and shorter. A dry pine board 11 inches wide might gain or lose 1/8" in width in a week, but a 12 foot long board won't gain 1/8" in length. Tabletops move all around. Legs don't do much.

Don't fret. Make the table as best you can. Make the pieces as accurately as you can. Align your joints. Center the baulks of wood in the clamps so that the center of the screw is in the center of the board you're clamping, not offset and yanking it one way or the other. Measure assembled rectangles from corner to corner diagonally, and then the opposite diagonal, and when they are the same, the thing is "square." Do your best to not let the errors accumulate; make only one mistake at a time.

And it will still wobble. Mine do.

Then take the table, if it's small enough, and place it on the only thing you own that's flat, which is your tablesaw tabletop, and wobble it. Two table legs, diagonal from one another, will not lift off the tablesaw. Leave those alone for now. Wobble the table until the other two legs are off the saw, and equalize the amount each is off the table. Use something to measure that distance between the bottom of the leg and the sawtable top. Mark that measurement on those two legs I told you to leave alone, those that WILL NOT wobble. I use a scribe, which is like a compass, to make such measurements and markings. Sand or cut to the line. Now the table will not wobble. It's much harder when the table is bigger to find a flat surface to accommodate the four legs. Kitchen counters are generally very flat, especially if they are stone, as many are these days.

If you make a mistake cutting and measuring for the wobble, over and over, eventually you will get to the top the legs, and you'll have a nifty cutting board.

By the way, accumulated error is why climate scientists tell you it's going to be 500 degrees centigrade next summer, or there will be sheets of ice stretching over the Florida panhandle -- depending on who gives them their grant money and whether their ruler has 11-1/2" or 12-1/2" inches to the foot.
Posted by SippicanCottage at 8:53 PM

I've been hanging around Sipipcan Cottage for a while now, and I'm beginning to think there's nothing you can't explain.

I don't say correctly, but it is always well done. Of course, your help for Pat is spot on.

(If you were always right, you wouldn't be here, talking to us.)

What a pleasant thing to say. Thanks as always for visiting and commenting.