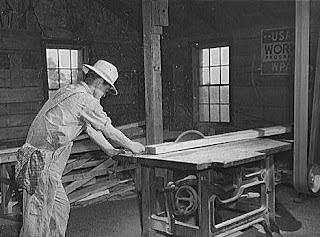 Look, Pat over at Stubborn Facts is talking about me. And unlike most people, he's being pleasant about it. I'm impressed a bit.

I'm not impressed for the reasons you might think right off. I'm impressed that another man has the poise to openly say he's emulating another man. A very imperfect one, at that.

People are always trying to associate themselves with celebrity, for instance. Any tenuous connection they can conjure up -- or lie convincingly about -- to anybody with the slightest bit of name recognition is the first thing out of anybody's mouth.

You know, my best friend lives next door to Tom Brady's mother's podiatrist's landscaper's butcher, so I feel as if I really knocked up Bridget Moynihan!

Well, not quite. Pat is a great big man and I'm not a celebrity. And although I'm Time's Person of the Year, I doubt Pat is much impressed. I think I'm standing next to the thing that has caught his fancy, and so bask in its reflected glow.

I am an autodidact. At everything. And one aspect of being an autodidact is you often flail away on your own when a little help would have gone a long way. Pat will go farther faster than I would because he knows enough to look around for anything that might help him.

I have no advice for Pat. I used to be loaded up on advice, but I feign being fresh out all the time now. I only respond to direct questions at this point. Everyone involved is the better for that. Unsolicited advice is unerringly bad, in my experience. What isn't actively wrong is generally ignored anyway. But I have to say something, I guess.

The easy thing is to remind him not to cut off his fingers. That's considered undesirable among many classes of persons these days. It's not for me to cast aspersions on those people too haughty to participate in auto-mutilation as a general rule. They are creatures of pride, generally; and people who deem themselves too high and mighty to even consider lopping off a finger or two, or putting out what all thinking persons know is a redundant and superfluous second eye, are not my kind of people. Let them congregate together in the thin ether of snooty society. Pat and I know the joys, cameraderie, and brotherhood of the spinning remorseless blade.

So I will skip that lecture, except to say that Pat has entered a different sort of arena than he is used to, and we should caution him severely. If Pat is a bad lawyer -- and I have no reason to doubt that, as he is my friend -- he could get his clients put to death or imprisoned for the entirely wrong crime, which might put him off his dinner for an evening or two. He might contemplate the blow that would be to his reputation, and be discommoded mildly by remorse over it, until he watches the lights dim and flicker for a moment as his conscience and his accounts receivable are wiped clean. It is expensive, time-consuming, and tedious to have to own evening clothes and constantly attend funerals if you are a doctor, for another example. If he becomes a serial murderer or some other worthwhile and energetic professional, there will always be lots of clean-up and some paperwork, but the details will fade into the mists of antiquity very quickly, and you will be restored to geniality after the lime burns heal.

But if you make a table, no matter how rude and misshapen, no matter what the vertiginous tilt it might present to the onlooker, no matter how foul the coloration applied to the glue-smeared splintery mess -- you will never be able to part with it once you make it with your own hands, and it will haunt you all the days of your life.

You can not even look forward to being dead, as so many of our brethren do -- or we do for them -- as your heirs and assigns will keep it around to remind them of what a magnificent fool that fellow Pat -- or "Old Leftie," if you're not careful -- was indeed.


Posted by SippicanCottage at 10:04 PM

Sipp says': "I used to be loaded up on advice, but I feign being fresh out all the time now. I only respond to direct questions at this point."

Interesting that our favourite autodidact seems to have homed-in on the same practice as the great Eastern gurus - they teach only by responding to questions - the usual opening remark is (apparently) 'Have you a question?'

So - is SC now sitting in his workshop among the sawdust surrounded by acolytes and with a line of devotees stretching out into the snow, answering questions (only one question each)?

And are these questions on the lines of "How do I get a sheen on Tiger Maple?", or "What is the sound of one (stumpy) hand clapping?"

The road to enlightenment is a long and arduous one. I can't seem to find the on-ramp, and I'm short of toll money anyway.

I have a higher standard in mind... not only do I not want to become known as "Stumpy Joe," I'm also planning to avoid "Ol' 9-Fingers" and "Mr. No Thumb."

By the way, I have sent a few people to jail in my time. That does have a more than ephemeral impact (for 5-10 years, at least)... mostly on the other guy, though, not me.

Now, since you've offered advice upon the seeking of it, how does one make all the legs on a little table come out the same size? I clamped mine together in sawing and making the dadoes and everything so they'd all be the same height and have the shelves at the same spot and everything, and one leg still came out shorter than the rest (I suspect warpage). Do I just keep sanding the others until they're evened out?