[I wrote this a year ago or so. I'm sick, and tired, and sick and tired, and the peepers haven't come yet. If you see me coming at the lumberyard, give way; and I warn you if you shake my hand and touch your face, you will pray for death from the bugs you inherit. Oh yes; Happy Thursday!] 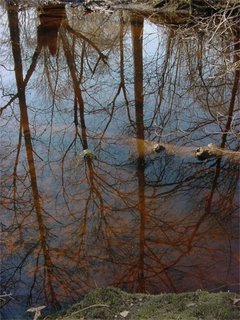 Winston Churchill was a very great man. But far better, he was an interesting man. His life was so grand, and vast, and fraught with peril and adventure, and his wit was so engaging, and his intellect so profoundly capable and cultivated that he can stand almost endless scrutiny. And when you're done reading all about him, you can read the books he wrote about everybody else.

He was funny, too. And like many men afflicted with humor, he got depressed from time to time. Not down in the mouth depressed, no; the kind of mental anguish that makes a man eye the kitchen knives while holding a tumbler of scotch. He called it his "Black Dog." He knew it would present itself from time to time, and he would get past it by doing something else. Now, doing something else for him meant throwing himself into painting landscapes in the south of France, or building a brick cottage on his country estate, brick by brick with his own hands, or any one of a hundred interesting things that presented themselves to a person of his influence and capacity. And he'd refresh himself by tiring himself out, and get back to yanking on the levers of power in the British Empire.

The Black Dog haunts me too. It comes generally in the late winter. I range around the house, unable to sleep, dogged by some lingering catarrh, bored, and greedy for the sunshine that never seems to come back after Columbus Day. What sleep there is is death, not rest. And you remind yourself that there are others with real problems, and yours don't compare. It doesn't make you feel better, generally, but it keeps you from taking poison.

I was outside yesterday. It was clement. The breeze didn't feel like a knife, or a fish to the face, the sky wasn't crowded with scuds the shade of dishwater, and the sun began to warm to its task a bit and shooed the thermometer into the fifites. Woodpeckers banged their stupid happy heads against the trees behind the shed, an osprey kited over, silent, cruising the edge of the treeline for a rodent foolish enough to look both ways but not up. Oak leaves began to flutter down from the branches they had grimly hung on to all winter, rattling and writhing through the snows and winds, now gently set adrift by the birth of their replacements. I could smell things. Things that smelled faintly like life.

And then I heard it. The peepers. It's such a pleasant little flourish they blow, indistinct, happy, variable. It's such a part of the aural wallpaper after a while you don't pick up on it right away. We've had people stay over our house who remarked in the morning that the peepers sounded like a jet engine outside the window -- they were urban folk and preferred to be lulled to sleep by the quotidian sounds of the odd distant four alarm fire and the delivery truck -- we barely noticed them.

Their little trill -- the thrill of picking up on it for the first time -- the ticking off in your mind of the first in the long litany of Nature's To-Do-List: new mown grass; the crack of the ball on the Hillerich and Bradsby; the glory of fireflies in June; daylight at 9:00 at night; the languid drone of the cicada; rich warm breezes coming in the window as you enjoy the slumber of the sunburned and contented -- it's all there -- if you'll let your mind wander a bit to the end of the road the peepers are paving for you right now.

The Black Dog plays in the swamp, and is consumed.
Posted by SippicanCottage at 9:08 AM

Sounds like your sickness-induced depression is the kind of malaise I described in an article 7 years ago - www.hedweb.com/bgcharlton/depression.

The treatment is to find the painkiller/ analgesic (or safe combination of them) in regular doses that works best for you (you should know within a couple of hours of the first dose whether it lifts the malaise/ fatigue significantly) - www.hedweb.com/bgcharlton/fatigue.

editor t- That was a fascinating treatise.

My analgesic of choice is extremely dark brown, and has a harp on it. Are you familiar with it?

One of my favourite beverages - but a poor analgesic IMHO

Sadly, migraine has made me an involuntary abstainer.

Yet all the precedent is on my side:
I know that winter death has never tried
The earth but it has failed: the snow may heap
In long storms an undrifted four feet deep
As measured against maple, birch, and oak,
I cannot check the peeper’s silver croak;
And I shall see the snow all go downhill
In water of a slender April rill
That flashes tail through last year’s withered brake
And dead weeds, like a disappearing snake.
Nothing will be left white but here a birch,
And there a clump of houses with a church.

Editor T- It is a poor analgesic, it's true, but it does makes other people more interesting.

Never fear, I use it psychotropically - I have a few drinks and wish I was at the beach.

Winston Churchill's life even began interestingly -- I read that he was born in the ladies' room at a dance!
What a way to come!

My first winter out of NYC in 40 (yikes!) years, and I am realizing the extent to which the artificial lighting and 24/7/365 bustle of the city shielded me from the reality of winter. NC has a very mild winter, but God, the dark doesn't seem to want to let go. And without a decent shroud of snow you can just see all the dead things, which are sure taking their time about showing any signs of life. On a recent walk on a mild sunny day, J said, "All those trees are dead!" I said, "No they're not, it's just still winter." Snow, even dirty old snow, is like the wrapping on a present that doesn't come off until the present is ready.