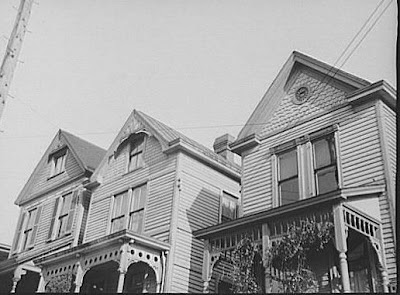 I've walked up this street so many times now. I can't really remember how many times.

You can never put your foot in the same river twice.

Heh. High School. What do they know?

I can tick my finger through the slats on Atkin's fence, and feel the rhythm of it in my bones. I can remember which are out of alignment enough to break the pulse of it. I know it. I painted it once for summer money.

I know when to shrug past the light pole and dodge around the mailboxes and the amount I've got to raise my foot to clear the curb without looking. The neighbor's dogs don't bark at me. They know me like I know them. I'm not the same as when I left, but I smell the same, I guess.

I like the way the rocker at 27 goes back and forth in the breeze. I could always look out the window and see how much breeze there was before I went out. There's never a person in the chair, so it's more useful. Funny, that.

The lawn's gone to seed. Mom never could push that fiendish little mixer with the curling blades going swish swish and the finely shorn blades of grass cascading onto your shoes. It always made her peevish, to be so close to danger and to be expected to be disinterested in it. I could tell her a bit about that now.

Dad had to go and die on her. His back was too strong for his heart, she said. She says I got all his heart. She got the mower.

She's alone, but not lonely, she wrote to me, because she has him and me in her heart always. She says death and the grave is nothing. Nothing but your troubles ends at the edge of the hole in the ground, she'd said while we each threw in a handful of gravel, eight summers ago. Mom cries when she reads novels but not in a boneyard.

I always put my right foot on the first step.It's the spot already worn from dad's boot. I wear away at the spot in his place now. Someday I'll wear it clean through and I won't know what to do, because the hole will be dearer to me than a religion, but how do you keep a hole? Dad will be gone in another hole.

The door has that heavy oval glass in it. I used to run my finger around the bevel, to feel the clean edge and marvel at the perfection of the curve of it. Dad said I'd be a man when I could reach all the way around without tiptoes. I showed him I could. He let me mow the lawn.

The paints peeling on the jamb, except around the doorbell, where it's worn all away. There's a lesson in that, but I don't care what it is. I can see straight through the house from the stoop, the rooms opening one into another in a line. Mom's in the kitchen, at the end of the parade. Her hair hangs in her face like it always did when she was working. A wisp on either side of her eyes. She brushes it back with the side of her hand, and her head turns, and she sees me there in the glass.

Maybe I should have wrote. Maybe I shouldn't have worn the uniform. Maybe she don't know me right away. Maybe I'm different now.
Posted by SippicanCottage at 12:00 AM

That was just exceptional. Thank you.

Thank you for visiting and reading and commenting.

That is simply beautiful writing. Take that and make it a prologue to a book and lots of us would be thankful to read such lyrical, elegant stuff.

You must be revving up to write Mrs. Sippican one heck of a Valentine.

You're really awesome at this whatever-they-call-it style.

Thank you all for such kind words.

It is a meager thing, but mine own.