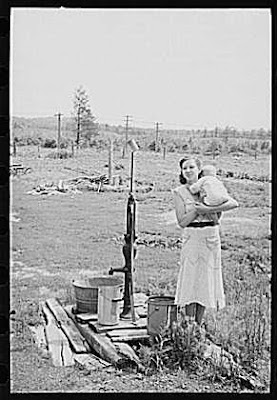 It tastes like the earth. I can feel it. I roll it around in my mouth and it's like the magnetism of the poles is in it. The world and everything in it is in the well.

I love that baby. I want to bathe him in the water from the rusty bucket. I want to baptize him myself from the font of the world. I want his bones to sing with the vibrations in the earth. Not clean, exactly; anointed.

That boy's father carries him like a package. He isn't anything to him yet. He loves him, sure, but in a potential sort of way. At least he carries him like there's something breakable in that package. His love is purer than mine - because it is all in his mind, and still he loves that baby. Me, I can still smell the musk of my own womb on his soft little head. And the taste of the rusty bucket.

I didn't know what to think when they strung the power lines across the horizon. Whatever is in those wires is not a person, but it trespasses just the same. But then I felt it. There was power in them, coursing through them. It was everybody and everything going everywhere all the time.

Sometimes I take my boy out in the cool of the evening, the clank of the final fork on the last plate still ringing in the house behind us, and we drink from the bucket with the rust in it, and I hold him up in the air so he can be washed in the power of those lines.

He was born to live in that power. I was born to drink from that bucket.
Posted by SippicanCottage at 8:31 AM