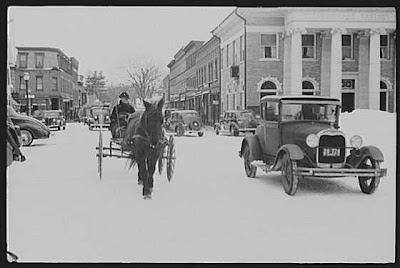 This is the time of year it snows in Southcoast Massachusetts. The ocean has cooled, and it's really winter now. Occasionally we really get bombed late in the season, while the rest of the winter we're barely touched. But all we got was fat, fluffy flakes sifting down in the early morning. Marvelous.

The little guy usually wakes up and stands in his footie pajamas at his door and announces himself in a tiny man's voice: Gud mowahningg! We went looking for him this morning --getting late-- and found him with his nose pressed against the pane in his room, silently considering the big jolly flakes as they passed by.

It takes the edge off everything. softens the harsh edges of the dormant landscape. Throws back the wan sunlight and gets light all the way into your house and your soul for a change. It reminds you of the turning of the earth and march of life. It could get you down, if it was all there was. But if you've got your mind right, in the summer you can remind yourself that you don't have to scrape the heat off your windshield, and in the winter you can remind yourself you're busy not scratching the bug bites you don't have. It's all good. Or a respite from bad. Or something.
Posted by SippicanCottage at 10:13 AM